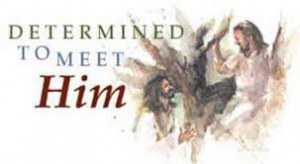 The Story Of Jesus and Zacchaeus

In  Luke 19:1-10,  the bible tells us a story about a man named Zacchaeus, who wanted to see Jesus.  I wonder how many people would want to see Jesus today, if He were to come to your town?  Well, Jesus had entered the town of Jericho, and was passing through it, we’re told in  Luke 19:1.   “And there was a man there named Zacchaeus, and he was a tax-gatherer, and he was rich.”   V-2.   But the crowd that had assembled to see Jesus was so large, and Zacchaeus was small in stature, that there was no way for him to see.   V-3.   Oh how we should pray to the Lord, that there would be so great a crowd gathered in the town that we live in, that people were “straining” to know something about Jesus!  But Zacchaeus had an idea, so he climbed up into a sycamore tree, so that he could see over the crowds.

The people had heard about Jesus, and they wanted to know more.  I’m quite sure that everyone in Buffalo has heard about Jesus, but how many want to know more?  Well, there was Zacchaeus, up there in that sycamore tree, and here comes Jesus.  “And when Jesus had come to the place, He looked up and said to him..”   V-5.   Here’s our friend Zacchaeus, up in a tree, just hoping to be able to SEE Jesus, and Jesus sees HIM!  Did you know that Jesus can see you right now?  He can!  And He can see you everywhere you go.  And He can see everything you do.

Well, Jesus not only could see Zacchaeus, but He knew his name!  And He called him by name.  He said, “Zacchaeus, hurry and come down, for today I must stay at your house”.   V-5.   Did you know that Jesus knows your name too?  And He knows where you live.  It’s true, He does.  And you know what else is true?  He wants to stay at your house as well.  Jesus wants to be a part of your family, and He wants you, to be a part of His family.    V-6  tells us that Zacchaeus “hurried and came down and received Him rejoicing!”   And Jesus said in  V-9,  “Today salvation has come to this house..”   Do you know why salvation came to the house of Zacchaeus that day?  It was because Zacchaeus “received” the Lord Jesus, and there’s no doubt that he received ALL that Jesus had to say also.

In the book of  Acts, in chapter 2, and verse 41,  it says, “So then, those who had received his word were baptized, and there were added that day about 3,000 souls”.  They were “added” to Christ’s body.  Salvation had come to the houses of 3,000 souls on that day.  And salvation could come to your house today also.  All you need to do is believe in Jesus the Christ, repent of your sins, be willing to confess His name before men, and then be baptized for the forgiveness of your sins.   Then you can rejoice just like Zacchaeus did on that day, when Jesus saw him, and called to him, and saved him.  By simply obeying Jesus, you can be “added’ to His family of the saved.  Won’t you be determined to know more about Jesus?