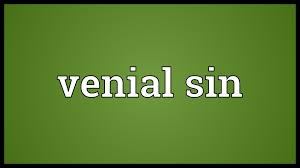 Is There Such A Thing As A Venial Sin ?

So then, what does the word “venial” mean?  Here’s a definition from Merriam-Webster;  “Of a kind that can be remitted.  Forgivable, pardonable.  Also, meriting no particular censure or notice.  Excusable.”   Now if you will notice, that very definition contains a contradiction of terms.   On the one hand, it says that “venial” pertains to something that can be pardoned or forgiven, but then on the other hand, it also says that it refers to something that merits no particular censure or notice.  Those are two completely different definitions.  Just because something is pardonable, and forgivable, doesn’t at all imply that it is NOT of any particular importance, not subject to being censured to any degree, or not even worthy of being noticed.

Here’s a definition from what’s called a “Christian Theology” dictionary;   Venial..  “denoting a sin that is not regarded as depriving the soul of divine grace.”  Of course, divine grace, is salvation.   And then it lists some words that it calls “synonyms” for the word venial.   Three of the synonyms are;  “forgivable, pardonable, and excusable”.  Now those all mean the same thing;  That sin is forgivable.   And that’s exactly what the bible says about sin, that sin is without a doubt, forgivable.  For example;  1 John 1:9  says;  “If we confess our sins, He is faithful and righteous to forgive us our sins, and to cleanse us of ALL unrighteousness.”

That verse clearly says that ALL unrighteousness can be forgiven, not just certain sins, but ALL unrighteousness.   God is faithful and righteous!  God has promised, that if a Christian will confess his sins, that God will be faithful to His promise, and forgive those sins.

But now, let me read to you some other words that are listed by this “Christian Theology” dictionary, as also being synonyms of the word “venial”.  Here they are;  “allowable, permissible, slight, minor, unimportant, insignificant, trivial, trifling.”    Just like that first definition that I read, there’s a stark contradiction here, in the very definition of the word.   None of these last eight words, has the same meaning as the first three words.  Yet whoever wrote, and composed, this dictionary, thinks that all of those words are synonymous with each other.

People sure get themselves into a lot of trouble, when they try define words, and especially so, then they try to give a word, a biblical definition, when the word isn’t even found in the bible.  So then, we would be better off, to just forget about the word “venial” since no such word is used in the bible.

The bible also says in  Isaiah 59:2;  “But your iniquities have made a separation between you and your God, and your sins have hidden His face from you, so that he does not hear.”   Which sins does the bible say will separate you from God?   Your sins!  That’s which sins will separate YOU from God.  The bible doesn’t differentiate between one sin and another.  It simply makes the statement that your iniquities (which are your sins) have separated you from God.  That’s as plain and simple as it gets!

I now that there are lots of people who would try to make this a long and drawn out debate, trying to somehow prove, that some sins will not cause you to be lost, while others will.  But as you can see, that is NOT what the bible says.  The bible says;  SIN brings forth death.  SIN separates you from God.  The very meaning of spiritual death, is to be separated from God.

One more verse might be in order here, this one from the book of James.  And God couldn’t have put it any plainer than this;  James 2, verse 10  says;  “For, whoever keeps the whole law, and yet stumbles in one point, he has become guilty of all!”  There you go.  It doesn’t make one bit of difference HOW you sin, or WHICH command of God that you break.  You are either guilty or innocent.  And if you fail to keep just one command of God, you are guilty!   Please, don’t argue with me over this.  Save your arguments for God on the day of judgment.  These are His words, not mine.   Jesus assures us that;  “The word that I have spoke, the same will judge him at the last day.”  (John 12:48).

I want to bring up that word “venial” again.  Think about those two contradictory definitions of “venial”.   Judging from what we just read from the bible, namely,  James 1:15,  “When sin is accomplished, it brings forth death.”  And  James 2:10,  “Whoever keeps the whole law, and yet stumbles in one point, is guilty of all.” And  Isaiah 59:2,  “But your iniquities have separated you from your God, and your sins have hidden His face from you, so that He does not hear.”

We can see from those verses, that if venial means permissible, and allowable, then NO sin is “venial”.  But on the other hand, if venial means forgivable, and pardonable, then according to  1 John 1:9,  EVERY sin is venial.  Isn’t venial a ridiculous word to be using?    Remember what that says?  “If we confess our sins, He is faithful and righteous to forgive us our sins, and to cleanse us from ALL unrighteousness.”   According to that verse, every sin can be forgiven.

Now, I’ll just briefly make one more point about being forgiven of sin, but I don’t want to take a lot of time with it in this lesson.  But the point is, that confession alone, is NOT enough, for us to be forgiven of ANY sin.  The bible is clear, that without repentance of a sin, there is no forgiveness of that sin, even though that is not specified in the verses that we’ve been looking at.

It’s just like the verses that say that if you believe, you will be saved.  Like  John 3:16;  “Whosoever believes, shall not perish, but have everlasting life.”   Even though nothing else is specified in that verse, we know from other verses, that believing alone, is not enough to save us.

That’s how  1 John 1, verse 9  is, concerning confession.  To confess our sins, means to acknowledge before God, and to be in agreement with God, that we are guilty of sin.   But because of what we know from other verses of scripture, just the acknowledgment, and the agreement with God, doesn’t bring about the forgiveness that we need.   There must be repentance of sin, also.  There has to be a turning from sin, and a turning back to God.  It’s exactly the same as our initial forgiveness of sin.  There’s the acknowledgment of the fact that we are guilty, and then there’s the turning from the sin, and the turning to God, and then there’s the baptism, where we are born again, and get a fresh start.

An example of that is in  Acts chapter 8.   Simon “the sorcerer” was converted and baptized, but shortly after wards he sinned, by thinking that the power of the Holy Spirit could be purchased with money.  (Verses 9 thru 20).   So here was a Christian, who had just repented of his previous sins, and had been baptized for the forgiveness of those sins, and now he sins again. So does Peter tell him to be baptized again?  No, but here’s what he does tell him to do.   Acts 8, verse 22,  Peter says;  “Therefore, repent of this wickedness of yours, and pray to the Lord, that if possible, the intention of your heart may be forgiven you.”

It seems rather obvious to me, that within that prayer to God asking if the intent of his heart may possibly be forgiven him, there must have been the confession of his sin.   Wouldn’t the very fact that you’re asking for forgiveness, be an obvious sign that you are acknowledging your guilt?  I would think it would have to be.

By the way, I mentioned that repentance is not mentioned in  1 John chapter 1,  where we’re told that we must confess our sins.  But John does mention something else that must be done.  It’s really not something different, or something in addition, but it’s just phrased differently.  Here’s how John phrases his instructions to a Christian, as to how to be forgiven of one or more sins.  John says, in  1 John 1, verse 7;  “But if we walk in the light, as He Himself is in the light, we have fellowship with one another, AND the blood of Jesus His son, cleanses us of all sin.”

There’s one final question that needs answered.  Is there a sin, or are there any sins, that cannot be forgiven, even with confession, and prayer, and repentance?  Well,  1 John 1:7  says;  “If we walk in the light..  the blood of Jesus cleanses us of ALL sin.”   Verse 9  says;  “If we confess our sins, he is faithful and righteous to forgive us our sins, and to cleanse us from ALL unrighteousness.”

So then, I agree with the bible, that there are NO sins, that a Christian cannot be forgiven of, if we are willing to “walk in the light”, and to confess, and repent of, and ask God for forgiveness of.   And someone says, Ahha!  You better go study your bible.   Because Jesus Himself says, as plain as day, in  Mark 3:28 & 29;  “Truly I say to you;  All sins shall be forgiven the sons of men, and whatever blasphemes they utter.  But, whoever blasphemes against the Holy Spirit, never has forgiveness, but is guilty of an eternal sin.”

This is really pretty simple, so if you don’t know the answer, you’ll wonder why you didn’t understand it sooner.   Here’s the reason that there is no contradiction between those verses.  In  1 John,  what’s the condition attached to being forgiven of your sins?   John says;  “IF we confess our sins..”  What’s another condition?  what did Peter tell Simon the sorcerer to do?  He said to repent, and pray to God, right?  So then there’s the conditions that must be met, before God will forgive the sins of a Christian.

Of course you’re not going to do that.  And what will be the result of not praying and confessing and repenting of your sins?  They will NEVER be forgiven, not in this life, nor in eternity.  Therefore, why is blaspheme against the Holy Spirit NOT forgivable?  Because the Holy Spirit is the only source OF forgiveness that exists!   And if you won’t go to that source, you’re doomed eternally.

That’s pretty easy to understand isn’t it?  But here’s one more question.  What if you STOP, blaspheming against the Holy Spirit, and go to that Spirit in prayer, and pray for forgiveness, repenting and confessing your previous sin.  Can you be forgiven?  Or can you never receive forgiveness, because you have already in your lifetime, blasphemed against the Holy Spirit?

I’m going to leave you with that question.  And Lord willing, next week I’m going to talk about the apostle Paul, and how he himself said, in  1 Timothy 1:13;  “Even though I was formerly a blasphemer, and a persecutor, and a violent aggressor;  And yet I was shown mercy, because I acted ignorantly and in unbelief.”

So Paul was a blasphemer, but the question is, did Paul blaspheme against the Holy Spirit?  Next week, we’ll see if the bible will answer that question.