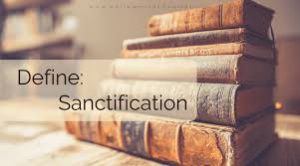 Understanding the Subject of Sanctification

The men of the restoration period, back in the late 1700’s and the early 1800’s, hit the nail right on the head, when they first suggested, that we need to call bible things by bible names, and we need to do bible things in bible ways.  And of course that wasn’t a new suggestion.  And it wasn’t even a suggestion that began with some man.  Actually it isn’t even a suggestion, it’s a order!  It’s a command, right out of the bible, and it comes from God!  God clearly commands us in  1 Peter 4:11;  “If any man speak, let him speak as the oracles of God.”

That verse specifically means that if we are speaking about God, or actually about anything even related to God, which would include His nature, His kingdom, His Son, His salvation..  then we need to speak, as God has spoken.  We’re not allowed to speak anything different from what God has spoken.  “If any man is preaching a gospel, contrary to that which you received, let him be accursed!” That’s what  Galatians 1:9  says. The original Greek word for accursed, is “anathema”.   That means, “to be laid up for destruction”.  If any man tells you anything different, from what God has already told us, let that person be laid up for destruction!  Exclamation point!

That’s how important it is, to NOT speak anything different, from the word that God has already spoken.  “If any man speak, let him speak as the oracles of God.”   The “oracles of God” are simply the words of God, and the instructions and commands of God.

We need to call bible things by bible names.  So let’s talk about this thing called “sanctification”.  I think I just talked about it in a lesson last week.  Maybe you remember;  There are two parts to sanctification.  first there is a purifying (or cleansing), and then there is a setting apart.  If you leave out either of those two parts, then it isn’t sanctification.   That’s a “bible definition” because that’s exactly what the original Greek word means, it’s the meaning of the word that God inspired the writers of the new testament to use.

Now, that word sometimes means something else to some people, and it might mean various different things, to various different people.  But the reason for that, is because they’re not calling bible things by bible names.  They’re using the word “sanctification” to refer to something other, than what the bible uses it to refer to.

Here’s an example of how the bible uses it;  1 Peter 3:15  stresses the aspect of “setting apart”.  “But sanctify Christ as Lord in your hearts..”   Sanctify Christ;  In other words, set Him apart in your heart, acknowledging Him as the Christ, the Son of God, the Savior of the world.

And here’s an example that stresses the aspect of purifying, or cleansing;  Ephesians 5:25 & 26;  “Husbands, love your wives, just as Christ loved the church, and gave Himself up for her, that He might sanctify her, having cleansed her by the washing of water with the word.”  By the way, that’s baptism that’s being referred to there, when it says;  “by the washing of water by the word”.

That IS the point in time when we are “sanctified” by God.  When He washes away our sins, thereby “cleansing us”, at which time also, He “sets us apart” in the church, the body of the saved.  Remember how Peter preached to the people on the day of Pentecost, saying in  Acts 2:38;  “Repent, and let each one of you be baptized in the name of Jesus Christ, for the forgiveness of your sins..”   Well,  verse 41  says;  “Then those who had received his words WERE baptized, and there were added that day, about three thousand souls.”  Those souls were “set apart” from the rest of the people, who had NOT received Peter’s words instructing them to repent and be baptized.  And then of course  verse 47  says;  “..and the Lord was adding to them, day by day, those who were being saved.”  God was cleansing them, by forgiving their sins, and He was setting them apart, by adding them together with the rest of the saved.

That is what sanctification means, and that is how the word is used in the bible, by God Himself.  And we need to use that word in exactly the same way.  Not in some other way, which actually distorts the very meaning of the word, but we need to use it the way God uses it, so it can be perfectly clear to everyone, exactly what it means, to be sanctified.   Call bible things by bible names.  Use the words that the bible uses to describe what God is teaching us.  That way there is no misunderstanding about what’s meant.  But if you change the meaning, well, you’ll just cause confusion, and the next thing you know, there’s false doctrines flying around.

Listen to  1 Corinthians 6:9 thru 11;  “Or do you not know that the unrighteous shall not inherit the kingdom of God?  Do not be deceived, neither fornicators, nor idolaters, nor effeminate, nor homosexual, nor thieves, nor covetous, nor drunkards, nor revilers, nor swindlers, shall inherit the kingdom of God.  And such were some of you (now listen)  But you were washed, but you were sanctified, but you were justified in the name of the Lord Jesus Christ, and in the Spirit of our God.”

Who is it that does the washing, and the sanctifying, and the justifying?  It’s God who does it, it’s by the authority of our Lord Jesus Christ, and by His power.  We don’t do it, God does it.   And when does He do it?  He does it when we have completed our part, in obeying the first principles of the gospel of Jesus Christ.  After we have come to have faith, and after we’ve repented of our sins, and after we’ve confessed the name of Christ, and after we’ve been baptized for the forgiveness of our sins, then, all at once, God sanctifies us!  Boom, just like that it’s done!

It might take us some time to accomplish our part, but God’s apart is done all at once.  Cleansed and set apart, just like that.

A woman was telling me recently that sanctification was a process that we accomplished, as we worked toward our salvation.  And I corrected her and told her all about what the bible says about sanctification, just like I’ve done here.  And here’s what she said;  “What you’ve explained is what I’ve know to be described as positional sanctification. I was referring more to progressive sanctification, and still to come in the end, ultimate sanctification.”

So this woman has her own definitions of sanctification, and she’s got them broke up into three separate parts;  Positional, progressive, and ultimate.  Now let me say that this woman is truly sincere, and has a very good heart, and truly wants to please God.  She just has things a little bit confused.

But you can kind of see why people can get confused, if they’re not really grounded in what sanctification means.  She thought sanctification was something that we do.  She didn’t realize that it’s something that God does.   And as I said, she thought that we were sanctifying ourselves as we were working out our salvation.  You see, as we work out our salvation, we’re constantly putting aside those things that are sinful, and those things that are in disobedience to God, and so we’re setting ourselves apart from those things.  So she understood that part.  The part about how we’re “set apart”.   But she just had it mixed up a little.  We have to set sin apart from our lives, but then it’s God who sets us apart from the world, after we’ve turned form our sins.  God cleanses us from our sins, and He sets us apart in His kingdom.

That’s what sanctification is.  What’s it called when we set ourselves apart from our sins?  Well, for one thing, it could be called repentance.  In repentance, we turn from our sins, and so I guess you could say that we set ourselves apart from sin, when we turn from them.   What else could we call it?  We could call it “being obedient”.   That’s actually what it’s called in  Philippians 2:12.  Listen;  “So then my beloved, just as you have always obeyed, not as in my presence only, but now, much more in my absence, work out your own salvation with fear and trembling.”  We work out our salvation, and set ourselves apart from sin, through our obedience to God.

I you could also simply call it “remaining faithful”.  To remain faithful, you’ve got to continually separate yourself from sin, right?  And you could call it “enduring”.  We have to endure all the trials and the temptations that come our way, without allowing sin to be a part of us again.

I’ve preached about it several times;  “The way of escape” has been supplied to us by God.  It’s something that you’ve always got with you, so no matter when or where temptation occurs, you’re ready.  I’ll give you a hint.  When we endure trials and temptations, we are overcoming the world.  What is it, that we have with us all the time, that overcomes the world?   1 John 5, verse 4  tells us;  “And this is the victory that has overcome the world, even our faith!”   Faith is “the way of escape” from every trial and temptation that we will ever face.   It is by our faith that have the power to endure, and it’s by our faith that we have the power to overcome.  It’s by God’s grace that our salvation is made possible, but it’s by our faith that it’s accomplished?

So then, we endure, we remain faithful, and we repent every time we need to, it’s a lifelong process, but it’s God who sanctifies!   And he does it when He forgives us of our sins, and adds us to His kingdom.

It’s a simple thing to understand, when it’s explained, but it becomes confusing when people use the word sanctify to refer to things that it doesn’t really apply to.  And so, let’s call bible things by bible names, and let’s do bible things in bible ways.  That way we know that we’re pleasing God, and doing His will.