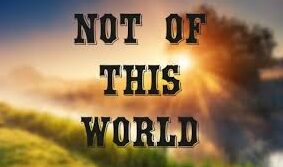 Question:  How do You Live IN the World, But Not be OF the World ?

For example, Jesus said in  Luke 9, verse 23;  “..If anyone wants to come after Me, he must deny himself, and take up his cross daily, and follow Me.”   Deny yourself..  Well that’s easy isn’t it?  No, that’s not easy at all, unless you’ve really trained yourself well, and are really good at making personal sacrifices.

It’s an analogy of how Jesus was forced to carry His own cross on His back, and drag it along with Him, as He walked to the place called Golgotha, where He would be crucified.   He had just been beaten half to death, and THEN He was forced to “take up His cross” and carry it along!  Taking up your cross, daily,  just doesn’t sound all that easy to me.  It sounds like a lot of effort, and faith, needs to go into it.

We’re told in  1 Peter 5:8 & 9;  “Be sober-minded;  Be watchful.  Your adversary the devil, prowls around like a roaring lion, seeking someone to devour.  Resist him,  (James 4:7  says;  “Resist the devil, and he will flee from you)   So..  “Resist him, firm in your faith, knowing that the same kinds of suffering are being experienced by your brotherhood throughout the world.”

In other words, our brothers and sisters in Christ, are facing troubles, and temptations, and hardships, all throughout this world;  And they’re doing it faithfully, every day.  And we can do it too.   And God give us these words of encouragement, to help us, as we carry our cross daily.  God tells us in  1 Corinthians 10, verse 13;  “No temptation has overtaken you, but that which is common to man.  And God is faithful, Who will not allow you be tempted beyond your ability, but with the temptation, He will also provide the way of escape, that you may be able to endure it.”

And then we’re told in  1 Peter 5, verse 10;  “And after you have suffered  (after you’ve endured)  for a little while, the God of all grace, who has called you to His eternal glory in Christ, will Himself restore you, secure you, strengthen you, and establish you.”   So we have some pretty encouraging words from God, to help us, as we carry our cross.   And how thankful we should be, that we don’t have to carry the same kind of cross that Jesus had to carry!

You know, it seems like all we hear about these days is “diversity”.  How we should accept anything and everything that people can think of, all in the name of “diversity”.  But make no mistake about it, those who are preaching this “diversity” have absolutely no intention of allowing you and I, to not “fit in” to THEIR idea of “diversity”.  Are we allowed by the world to have our own “diverse” opinions?  NO, we are not!!   Not according to the “diversity” crowd!

Jesus told His disciples, in  John 15:18;  “If the world hates you, understand that it hated Me first.”   If you’re happy to fit into the world, then the world is going to love you.  But when you’re “diverse” enough to only be happy following God, well then, I guess you’re simply “out of luck” in this world.

The Jews hated Jesus, because He didn’t fit in.  He preached and taught things that were drastically different from what they were used to, and different from what they wanted to hear.  And so they hated Him!  And they not only wanted to “cancel” Him, like the “cancel culture” that is so prevalent today, but they wanted to KILL Jesus!  And they succeeded.  But only because it was in accordance with the plan of God, and with the will of God.

Just like the apostle Peter declared to the Jews on the day of Pentecost, in  Acts 2:22 & 23;  “Men of Israel, listen to these words: Jesus the Nazarene, a man attested to you by God, with miracles, and wonders, and signs, which God performed through Him in your midst, just as you yourselves know;  Him being delivered over by the predetermined plan and foreknowledge of God, you nailed to a cross, by the hands of godless men, and put Him to death!”

So the Jews had Jesus arrested, and one of the charges that they brought against Him was that He was a criminal, although they had absolutely no evidence for such a claim.  And another charge that they brought against Jesus, was that He claimed to be a king, specifically, the king of the Jews.  And so Jesus was presented before Pontius Pilate, who of course was the Roman Procurator (or Pra’curator)  of the province of Judea from the years 26 to about 36 AD.   Pilate was basically the “governor” of Judea, that’s what a “pro’curator” was.

So the Jews deliver Jesus to Pilate, and here’s what the bible says in  John 18:29 thru 36;  “So Pilate went out to them and asked;  What accusation are you bringing against this man?  If He were not a criminal, they replied, We would not have handed Him over to you.  You take Him and judge Him by your own law, Pilate told them.  We are not permitted to execute anyone, the Jews replied.”

Then  verse 32  says;  “This was to fulfill the word that Jesus had spoken, to indicate the kind of death He was going to die.”  Jesus was to be crucified!

Now  verses 33 thru 36;  “Then Pilate entered into the judgment hall again, and called Jesus, and said unto him;  Art thou the King of the Jews?  Jesus answered;  Do you say this of your own accord, or did others say it to you about me?  Am I a Jew?  Pilate replied.  Your own people and chief priests handed You over to me.  What have You done?  Jesus answered;  My kingdom is not of this world;  If it were, My servants would fight, to prevent My arrest by the Jews.  But now, My kingdom is not of this realm.”

So Jesus openly admits that He indeed is a king!  But, not a king over the “nation” of the Jews;  Because as He said;  “My kingdom is not of this world..  My kingdom is not of this realm.”   Jesus is the king, over the kingdom of God, not over a kingdom of man.  And actually, if we speak as the bible speaks, in one sense, men aren’t even in the kingdom.  And neither are women in the kingdom..  In a sense.  Because the bible says, in  Galatians 3:28;  “There is neither Jew nor Greek, there is neither slave nor free, there is no male and female;  For you are all one in Christ Jesus.”

And so speaking in that sense, Christ’s kingdom, is made up of saved “souls”, not saved men or women;  But saved souls.  “..For you are all one in Christ Jesus.”   And as souls who have been saved from the consequences of our sins, we are no long OF the world, but rather, we are of Christ, and OF His kingdom.  Not of this realm, not of this world, but of the spiritual realm of God.  The kingdom, the “church” is not OF this world.  It’s of a totally different realm.

Your physical body may be of this world, but your spirit, is of a different realm.  That’s what the bible is talking about when God tells us to be led by the spirit, and not by the flesh.

Let me read what’s written in   Galatians 5, verses 13 & 14;  “For you brethren, were called to freedom;  (freedom from sin, is what that means)   But do not use your freedom, as an opportunity for the flesh;”  In other words, don’t think that because you’ve been forgiven of your past sins, that now you can go out and be a part of the world again.  The whole point of forgiveness, is that we’ve been given a new start;  A new birth as the scriptures phrase it.

And as it’s phrased in  Colossians verse 13;  “He has delivered us from the domain of darkness, and transferred us to the kingdom of his beloved Son,”   And like what’s written in  Romans 6, verse 1;  “What then shall we say? Shall we continue in sin so that grace may increase?”

And let me just read  verses 6 thru 12,  and then I’ll get back to the passage that I began to read from Galatians.  But  Romans 6, verses 6 thru 12  says this;  “We know that our old self was crucified with Him, so that the body of sin might be rendered powerless, (in other words, fleshly desires that are contrary to God’s word cannot be allowed to have the power over our choices, and over our decisions)  that we should no longer be slaves to sin.  For anyone who has died, has been freed from sin.”  And that’s what  Galatians 5:13  had said;  “For you brethren, were called to freedom..”

So then..  “For anyone who has died, has been freed from sin.  Now if we died with Christ, we believe that we will also live with Him.  We know that Christ, being raised from the dead, will never die again;  Death no longer has dominion over him.  The death He died, He died to sin, once for all;  But the life He lives, He lives to God!  So you also, must consider yourselves dead to sin, and alive to God in Christ Jesus.” (You’re no longer of the fleshly world, but you are OF the spiritual kingdom of Christ)

“Therefore, do not allow sin reign in your mortal body, so that you obey its desires.  Do not present your members to sin, as instruments for unrighteousness;  But present yourselves to God, as those who have been brought from death to life, and your members to God, as instruments for righteousness.”   You see, that’s all our bodies are;   They are “instruments”.  Instruments to be used to allow our spirits, to serve God, which also means, to serve others.

And this would be a good time to go back to our passage from  Galatians 5:13 & 14.   We left off with  verse 13;  “For you were called to freedom, brethren.  But do not use your freedom, as an opportunity to serve the flesh;  But through love, serve one another.”  As we serve one another, then we’re living spiritually, and we’re being led by the Spirit of God.

“For the whole law is fulfilled in one word:  (or one statement)  “You shall love your neighbor as yourself.”   That’s spiritual living!   That’s how you live IN the world, without being a part OF the world.  Because love for one another, is of God.