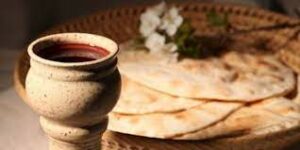 What does “Eucharist” mean ?

How many of you are familiar with the word “Eucharist”?   You’ve all heard the word used, right?  Among certain religious groups, maybe one in particular, it’s one of the most often used words.  But how many of you know what it means?   There’s actually more than just one meaning.  There’s the one literal and proper “bible meaning”, but then there’s also the “made up” meaning.   And it’s this imaginary, “made up” meaning, that a particular religious group believes in, and that causes trouble.

This group has simply “made up” their own meaning for the word, in order to try to support a particular, false belief, and false teaching.  And that false teaching is, that when you are a member of that particular group, and when you partake of the Lord’s supper, that the unleavened bread and the fruit of the vine, literally, and quite miraculously, become the actual flesh and blood of Jesus.  Now that’s pretty bizarre.  And so this “special” unleavened bread, and this “special fruit of the vine” is what they refer to as “the eucharist”.    But then they also refer to Jesus Christ Himself, as “the Eucharist”.

But certainly,  Jesus Himself, isn’t the “act” of “giving thanks”.  And neither is a plateful of unleavened bread, or a cup full of fruit of the vine.  These are the things we’re most thankful for;  And Jesus is the ONE we’re most thankful for.  But that’s not what giving thanks is!  And that’s not what “euchariste’o” means!   It means.. “to give thanks”.  And it will always mean.. “to give thanks”.

Is Eucharist in the Bible ?

Do you know whether or not the word “eucharist”, is even found in the bible, or is it just a word that has been “made up” by men, along with this very bizarre, false teaching of men?

Well, here’s the fact of the matter;  The word “eucharist” is derived from the Greek word, “eucharisteo”, which is pronounced “you-khar-is-te’-o”.  And indeed, it is found in the bible.   That word, in it’s various forms, is used 39 times in the new testament.  And the fact is, the word has but one meaning, one biblical meaning.  And that one meaning is..  “to be thankful, to feel thankful, and to give thanks”.   That’s it, that’s what the word means, in the bible.

Let me give you a few examples of how that word “eu-char-is-te’-o” is used in the bible..

We should be thankful;  We should all be “Euchariste’o”.

But of course not all people are thankful.  We’re told in  Romans 1:21;  “For although they knew God, they did not honor Him as God, nor give thanks to Him.  But they became futile in their thinking, and their foolish hearts were darkened.”

Isn’t it a shame that that’s the way it is so often?   I know there’s plenty of people who claim to simply be atheists, and deny that God even exists;  But I think that when most people look around them, and think about all of creation, that they know in their hearts that there’s a God.  They know, but yet, they just seem to ignore that fact.  They don’t honor God, they don’t honor His word, and they aren’t necessarily thankful to God, for anything that they have.  It’s both a shame, and it’s sad.

But hopefully OUR lives, will be, and ARE characterized by the words of  Colossians 3:17;  “And whatever you do, in word or deed, do everything in the name of the Lord Jesus, giving thanks to God the Father, through him.”   “Giving thanks”..  “eucharistoun’tes”.

There’s so Much that can be Said about Thankfulness..

Here’s a cute little story about being thankful..  There was a first grade teacher named Ms. Klein.  And one day just before the thanksgiving holiday, she asked the kids in her class to draw a picture of what they were most thankful for.  Now these kids were all from a very poor neighborhood, and none of them had much to speak of in the way of physical things.  And so she expected them to simply draw pictures of thanksgiving turkeys or a table spread with thanksgiving food, or their family or something like that.  That’s what the kids probably thought that was what was expected of them.

And that’s pretty much what the kids all drew, except for one shy little boy named Douglas.  Douglas simply drew a picture of a hand.  And so the teacher was quite curious;  Whose hand this was supposed to be.  And so she asked the class to give their ideas.  And all the kids were really excited, and they were offering all kinds of suggestions.

Then Mrs. Klein recalled that she had taken Douglas by the hand from time to time, as  she often did with all the children. But she was touched, that it should have meant so much to Douglas.  And she thought to herself..  Perhaps, this was her Thanksgiving, and everybody’s Thanksgiving;  Not the material things given unto us, but the small ways that WE give something, to others.

So then I suppose that when we think about being thankful for other Christians, let’s be thankful, not for what they can do for us, but for what we can do for them.  You know, somewhere, I’ve heard the saying..  “It’s more blessed to give , than to receive.”

A good example of another bible word that is a transliteration, is the word baptize.  The original Greek word was “baptizo”, also pronounced “baptidzo”.   But it’s been transliterated into the English word “baptize”.   And the meaning of course is..  “to immerse”, or to “dip or plunge”.   But here’s the big problem with a transliterated word.  Along with the change of spelling, and the change of pronunciation, people tend to want to change the meaning.  And so people have tried to change, what it means to baptize.  They want to change it to mean “sprinkle” or “pour”.  But you can’t change God’s word, and God’s word says that we are “buried in baptism”.  (Romans 6, verse 3)  And that is without a doubt, an immersion in “the watery grave” of baptism.

And the same holds true for thankfulness.. “euchariste’o”.   Along with changing the spelling and the pronunciation, people have also tried to change the meaning.  They really have made up a completely new word.  The word in the bible, is a verb, it denotes action..  The “giving” of thanks.  But the new word, that’s been made up, is now a noun, which instead of referring to the action of giving thanks, it now refers to the thing for which thanks is given.

And this change, due to unbelief in the simple words of God, dates back to probably the second or third century AD.  Just a hundred or two years after Jesus Christ “gave thanks” for the unleavened bread and the fruit of the vine;  Such as is described in  Luke 22:19 & 20..

There the scriptures tell us;  “And He took bread, and when He had GIVEN THANKS, (there’s the action described)  ..When He had given thanks, He broke it and gave it to them, saying;  This is My body, which is given for you.  Do this in remembrance of Me.  And likewise the cup, after they had eaten, saying;  This cup which is poured out for you, is the new covenant in My blood.”

And that’s exactly what the unleavened bread and the fruit of the vine is.  Those items are the symbol of the new covenant, which is set in force, and ratified, and inaugurated, with the body and blood of Jesus Christ.   And those items also symbolize the promise that God has made with us, in this new covenant.  The promise to save us, if we remain faithful to Him, and if we continue to partake of these “emblems” as a symbol of that agreement.

What Picture would YOU Draw ?

Now, let me end with this question..  If I were to ask you to draw a picture, of what you are most thankful for, what would you draw?  Would you draw a picture of a broken loaf, or a cup filled with red fruit of the vine.  Or would you draw a hand?  Maybe the hand of Jesus, as He broke the bread, and as He offered the cup.  Maybe the hand of Jesus that was nailed to the cross.  Maybe you’d draw two hands..  Your hand, in His hand, as He draws YOU to heaven.