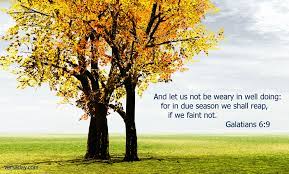 Let Us Not Grow Weary in Well-Doing

I’d like to begin with this morning by reading  Galatians 6, verses 9 & 10.   And as I read these two verses, I’m going to comment, and I’m going to let the scriptures themselves comment also.  So then, let’s look at those two verses;  They begin with an admonition, and then with some encouragement;  “Let us not grow weary in well-doing;”  There’s the admonition.  Now here’s the encouragement;  “For in due time, we will reap a harvest, if we do not give up.  (“if we do not faint”, as some versions say)

“Let us not grow weary in well-doing.”   Jesus spoke about well-doing, didn’t He?   For example, He said in  Mathew 5:16;  “.. Let your light shine before others, so that they may see your good works, (your well-doing)  and give glory to your Father, who is in heaven.”  Don’t do the good works for your own glory, do them for the glory of God.  God is the one who ordained the good works;  God is the one who established the good works.  God prescribed the good works.  It’s God who deserves the credit, not us.   Jesus tells us, in  Luke 17, verse 10;  “..You also, when you have done all that you were commanded, you should say;  We are unworthy servants; we have only done what was our duty.”

In  Ephesians 2, verse 10  we learn that.. “.. we are HIS workmanship, created in Christ Jesus for good works, which God prepared beforehand, that we should walk in them.”   Good works, are not OUR idea, they’re God’s idea.  Is loving your neighbor as your self  (Mathew 22;39)  our idea?  No, it’s God’s idea.  Is doing “nothing out of selfish ambition or empty pride, but in humility considering others more important than yourselves”  (Philippians 2, verse 3)  ..is that our idea?  No, it’s God’s idea.

What about “do unto others, as you would have them do unto you?”   (Mathew 7:12)  Our idea?  Our morality?  No, I don’t think so.  Thou shall not steal,  Thou shall not murder, Thou shall not commit adultery..  Is that our OWN morality?  No, it’s GOD’S morality;  Handed down to us, so that we can BE the kind of people that HE would have us to be.  I’m afraid that if all people were left to their own “devices” we’d all be like be a bunch of heathens, just looking to satisfy ourselves, and nothing more.

But our Father has something much better than that, laid up for us.  “For in due time, (He says) we will reap a harvest, if we do not give up.”   In “due time”.  Not necessarily according to our schedule, but according to God’s schedule.  “To everything there is season, and a time for every purpose under heaven.”   (Ecclesiastes 3, verse 1)

Now back to  Galatians 6.. verse 10  now;  “Therefore, as we have opportunity, (in other words, “when the time is at hand”, there is a time for every purpose, right?  When the opportunity presents itself, don’t pas it up;  This is what we’re here for..)  ..let us do good to everyone, and especially to the household of faith.”

Here’s something else that Jesus said;  This time from  John 9, verse 4;    “We, must work the works of Him who sent Me, while it is day;  Night is coming, when no one can work.”  Does God give us the opportunity, does the time ever present itself, to work the works that God has prepared for us?   If we just open our eyes, and our hearts, I think we’ll see the opportunities every day.

How should we apply that verse?  Should we apply it only to the time when we come to realize our obligation, to believe, and to confess, and to repent, and to be baptized for the forgiveness of our sins?   Or should we apply it to every day, when we have the opportunity to secure our salvation, by doing the works that God has given us to do?

I think the latter applies every bit as much as the former.  Do you remember what the apostle Paul was inspired to write in  Philippians 2, verses 12 & 13..  “Therefore, my beloved, as you have always obeyed, so now, not only as in my presence, but much more in my absence, work out your own salvation, with fear and trembling.”  How do we “work out our own salvation” ?   We do it by doing the work that He has prepared for us to do.

We are “HIS workmanship” not our own, created in Christ.  A new creation, right?  Even while we are living this physical life, at the same time, we’re living a spiritual life in Christ, in His kingdom, doing His will.

So then, never grow weary of doing the will of God.  We might not even SEE, the fruits of our labor, in this life.  But yet we have this promise from God.  If we just keep right on doing what’s good, for everyone, as often as we have the opportunity, and don’t ever give up, that in due time, we WILL reap the harvest.  That’s a promise from God.  And we shouldn’t ever question that, because we know that God is faithful who promised.  God won’t forget us;  God won’t forget out efforts.  Even if we don’t see the benefits of our efforts right now, and even if we don’t ever see them in this life, don’t ever lose faith, and don’t ever stop doing.  The fruits of our labor, will be there in heaven, when we get there.

This Life can be Wearisome

It is sometimes easy to grow weary with things in this life, isn’t it?  So often, things just don’t seem to go our way.  Sometimes we work just as hard as we can, but still don’t seem to get ahead.  And sometimes, it seems like there’s just one disappointment after another, and it’s wearisome, and it’s burdensome, and we get tired.  And then we look around at others, and everything seems to just fall into their lap, over and over again.  But it’s always the other guy, and not us.  Did you ever feel like that?

To me, that’s how this life seems to be.  What’s the use?  Where’s the benefit?  Do you know what a wise man named Solomon once wrote?  He wrote in  Ecclesiastes 1, verse 14;  “I have seen everything that is done under the sun, and behold, all is vanity and a striving after wind.”  And Solomon had pretty much seen it all, and done it all, and still that was his conclusion.  Where’s the benefit?  What use is it?

Now Solomon was reported to be the wisest man to ever live, But that’s because God gave him that wisdom.  But in spite of all his wisdom, here’s what he wrote in  Ecclesiastes 2, verse 15;  “So I said to myself;  The fate of the fool will also befall me. What then have I gained by being wise?  And I said to myself that this too, is futile.”    That’s simply how this life is.  Even Solomon grew weary!

Now obviously, things did go Solomon’s way.  He absolutely did see the fruits of his labor.  But even so, here’s what he said about that,  in chapter 2, verses 18 & 19;  “I hated all my toil in which I toil under the sun, seeing that I must leave it to the man who will come after me, and who knows whether he will be wise or a fool?  Yet he will be master of all for which I toiled and used my wisdom, under the sun. This also is vanity.”   And so there’s weariness, even for the wise and the rich.

Our Spiritual Life Should Never Be Wearisome

But as I said earlier, even while we live in this futile and vain, and wearisome physical life, we’re leading another life also, aren’t we?  We’re leading a spiritual life, where we don’t ever need to grow weary, because of the promise that God has given us..  “..for in due time we will reap a harvest if we do not give up.”   Jesus put it this way in  Mathew 6, verse 20;  “But lay up for yourselves treasures in heaven, where neither moth nor rust destroys, and where thieves do not break in and steal.”

The treasure you lay up in heaven, don’t simply get left for someone else, do they?  No, the treasures that you lay up in heaven, are there for YOU to enjoy for eternity!   There’s nothing vain at all, in doing God’s will!  As we do God’s will, in other words, as we obey His commandments, and the commandments of Jesus Christ, we’re laying up treasure in heaven, that will never fade away.  Though you can’t see it now, that treasure is there!  Because God tells us it’s there.

And so even if you feel that you aren’t seeing any results from the good Christian life that your trying so hard to live..  (I know we all make mistakes, but we’re trying, to the best of our ability)  But even if we feel like we’re not seeing the results, the results are there.  They’re building up in heaven, just waiting for us to reap the harvest, so to speak.

Doug has told us a story, and he and I just talked about it this past week;  About a preacher who held a meeting, and had great expectations, but only one woman, believed, and was baptized.  And so the preacher was disappointed, because had wanted to see more results from his efforts.  But as the story goes, that one woman, went on to become the mother, (or maybe it was the grandmother) of another gospel preacher, who converted hundreds of souls to Christ.  And so what the preacher had seen as a maybe you’d say, “a failure” turned out to be a success beyond his imagination;  He simply didn’t know about the fruits produced.

And then I read a similar story just recently.  And this story was published in a book called “Second Calling”.  The author was a woman named Dale Bourke.

Dale wrote that years ago, she attended a Christian retreat.  “When it was over, her friend Bruce offered her a ride to the airport.  As they were about to leave, another man asked if he could join them.  As they drove away from the hotel, she and Bruce asked the man where he worked, and he mentioned a Christian organization.  Bruce said; “I have fond memories of that group, because I attended a retreat of theirs one time, and that’s where I became a Christian.  It was in 1972 in New Hampshire.  Bruce went on to explain that eventually his whole family became Christians and went into Christian work.  His sister took part in missionary work, and Bruce himself became a publisher of a major Christian publishing house, which brought many significant Christian books to the public.  Bruce finished the story with a flourish saying that the retreat had had worldwide impact when you think about it.  The man was silent.  Dale and Bruce thought that maybe they were boring him. Then the stranger quietly said;  “I led that retreat.  It was my first time as a retreat leader, and I felt like a total failure. Until this moment, I have always believed it was one of the biggest failures of my life.”  Dale Bourke wrote;  “What had seemed like the simple act of offering a ride to a stranger, had turned into a powerful reminder, that God uses our efforts, whether we realize it or not.  I may spend the rest of my life doing things that don’t seem at all successful.  Only God knows the end of it all.  I am simply called  to be faithful.”

Isn’t that an encouraging story for all of us.  I’m simply called to be faithful.  If we plant the seed, God promises to give the increase.  And we’ll reap the harvest.