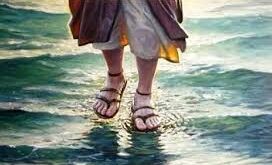 How many of you know who Randy Travis is?  He was a pretty popular country singer in his day.  He doesn’t perform any more, because quite a number of years ago, he had a stroke that left him pretty disabled.  But anyhow, one of the songs he recorded back in 1989 was called “He Walked On Water”.

It was a song about a little boy’s love for his great grandfather, and how he looked up to him.  The song tells a little bit about the old man, and then one of the verses goes like this..

And he was ninety years old in ’63And I loved him and he loved me.And Lord, I cried the day he died‘Cause I thought that he walked on water.

Did you ever feel that way about anyone in your life?  Did anyone ever feel that way about you?  We’ve got a great-grandfather in our congregation, and I would say that his great grand-children look up to him.  But of course the phrase “he walked on water” is just figurative, but we know what it means.  And we know that no one can actually walk on water right.

But there was one man, who could literally “walk on water” wasn’t there?  And His name was Jesus.  And He was the only man who had the ability to walk on water, wasn’t He?

Actually, there was one more man who did literally walk on water, and his name was Peter.  You know the story;  How that for a very short time, Peter actually had the ability to walk on water.  But you might say that it wasn’t Peter’s ability, that enabled him to walk on the water, but rather, it was Jesus Christ, in other words, it was God, who GAVE Peter that ability.

And I suppose, it’s really a matter of how you look at it.  Of course we know that it’s God who is the giver of ALL gifts.  And that’s true of Peter’s “gift” of being able to walk on water.  But when you think about it, Peter did indeed, for at least a very short time, possess the ability to do the impossible. According to the story, it really amounted to Peter’s faith, that allowed him to have that ability.  Peter’s FAITH enabled him to walk on water.

One time, some of the disciples of Jesus tried to cast out a demon from a person, but they couldn’t do it.  And this was even after Jesus had given them miraculous powers.  But still, on this occasion their power wasn’t strong enough.  But Jesus came, and He cast out the demon.

Listen now to what was said, in  Mathew 17:19 & 20..  “Then the disciples came to Jesus privately and said; Why could we not cast it out?  He said to them; Because of your little faith. For truly, I say to you, if you have faith like a grain of mustard seed, you will say to this mountain; Move from here to there,’ and it will move, and nothing will be impossible for you.”   Faith is a pretty powerful thing isn’t it?  It must be, if it can enable you to move mountains!  What’s more difficult, to move a mountain, or to walk on the water?  It doesn’t matter, because as Jesus said, with enough faith, “nothing will be impossible for you.”

Sometimes, possibly MANY times, possibly MOST of the time, our failure, or our success in something, might just come down to how much faith we have.  It’s true!  And that’s at least one of the reasons why, we need to grow in faith (through the study of God’s word)  “Study (be diligent)  to show thyself approved unto God, we’re told in  2 Timothy 2:15.  “..A workman who needs not be ashamed, correctly discerning the word of God.”

Our God has equipped us with everything that we need, to grow in faith.  And to quote from  Ephesians 4:12 thru 14..  “..to equip the saints for the work of ministry, for building up the body of Christ, until we all attain to the unity of the faith, and of the knowledge of the Son of God, to mature manhood, to the measure, of the stature of the fullness of Christ, so that we may no longer be children, tossed to and fro by the waves, and carried about by every wind of doctrine, by human cunning, by craftiness in deceitful schemes.”

Faith doesn’t come from human sources, does it?  No, it comes from God.  With the faith that God desires us to have, we ALL can “walk on water” so to speak!

And then keep in mind what we’re told in  Colossians 3:17..  “And whatever you do, in word or deed, do ALL in the name of the Lord Jesus, giving thanks to God the Father through Him.”

And when we do pray, we need to remember this verse of scripture also..  James 1, verse 6;  “But let him ask in faith, with no doubting; For the one who doubts is like a wave of the sea, that is driven and tossed by the wind.”

And so once again;  Our success, or our failure, in a given matter, might just be dependent, upon our faith!

Let’s go to the scriptures, and read that story of when Jesus and Peter, walked on the water.  Mathew, Mark, and John all record this occasion, and I’m going to read from the book of Mathew.  You might want to read along, by opening your bibles to  Mathew chapter 14,  and we’ll begin with  verse 22.

Now this took place right after Jesus had fed the multitude of people who had gathered on the banks of the Sea of Galilee, to hear Jesus teach.  And it’s described to us previously in this chapter, how Jesus took five loaves of bread, and two fish, and fed around 5,ooo men, plus the women and children.  And now I’ll begin reading from the scripture, in verse 22..

Do you see the example there of praying?  Jesus did it often;  You might say that He “prayed without ceasing”.  And so should we.  And we know that consistent prayer will help us to grow in faith, but I think we can view the prayers of Jesus, as an outgrowth of His great faith.  And so it can be with us also.

But let’s get back to our text..

Verse 24;  “And the boat by this time, was a long way from the land, beaten by the waves, for the wind was against them.  And in the fourth watch of the night He came to them, walking on the sea.”

How many lessons do you think we can learn from this short story?  Jesus already gave us an example of prayer.  And now we see the disciples, in the midst of a no doubt very frightening storm, and suddenly Jesus is there.  Have you ever faced something that was frightening, when you might have felt alone and maybe even helpless?  Well, even if you do feel like that, what a blessing to know that Jesus is there; Even in the midst of a storm, so to speak.

King David once wrote..  “Yea, though I walk through the valley of the shadow of death, I will fear no evil; For Thou are with me; Thy rod and Your staff, they comfort me.”  Psalm 23, verse 4.

How long had the disciples been out there at sea, being beaten around by the wind and the waves, before they saw Jesus?  The scriptures don’t tell us exactly, but they do give us a little bit of a time line.  Verse 15  had told us that it was evening when the multitude had gathered.  And I suppose it may have taken a couple of hours to feed all those people.  So it may well have been eight or nine o’clock by the time they finished eating.  And immediately afterwards, Jesus sends His disciples out in the boat, to go to the other side.

Now the scriptures say that it was during the fourth watch, that Jesus came to the disciples, walking on the sea.  The fourth watch is between 3 am and 6 am in the morning.  I would venture to say that those men were out in that storm for at least a few hours.  And they were scared!

You know, sometimes we have to “weather the storm” just like they did, before we find relief.  But just like Jesus came to them, in a rather unconventional way, the scriptures assure us that Jesus will come to us to.  And we can be sure that He’ll bring relief, in one way or another.
God makes this promise to us, in  Corinthians 10, verse 13;  “There hath no temptation taken you but such is common to man;  But God is faithful, who will not suffer you to be tempted above that you are able; but will with the temptation, make also the way of escape, that you may be able to endure it.”  Endurance is the key there, isn’t it?  In due time, God will help every one of us.

And try not to think of the word “temptation” in that verse, simply as what we may typically thin of as a temptation.  Think of it a a much broader sense, because the meaning is very broad, and it encompasses more than just being tempted to do something bad.  Here’s what that word encompasses;  It means..  “a putting to the test”,  the experiencing of evil, calamity, affliction.

There is no calamity, nor affliction, nor evil experience, nor trial, nor temptation, that ahs come upon you, but that is common to man.  But God is FAITHFUL, who will not suffer you to be tempted above that you are able; But will with the temptation, make also the way of escape, that you may be able to endure it.”

Quite a comforting verse isn’t it?

So, here comes Jesus, walking on the sea, in the midst of a violent storm;  And the scripture says;  “But when the disciples saw Him walking on the sea, they were terrified, and said, “It is a ghost!” and they cried out in fear.  But immediately Jesus spoke to them, saying; Take heart; it is I. Do not be afraid.”

“But when he saw the wind, he was afraid, and beginning to sink he cried out, “Lord, save me.”  Peter evidently took his eyes off Jesus;  Maybe just for a second or two, but that was enough!  Don’t take your eyes off Jesus!  Even for a second!

“Jesus immediately reached out His hand and took hold of him, saying to him;  O you of little faith, why did you doubt?

Have you ever had to ask yourself that same question?  “Why did you doubt?”

And that’s our lesson for today, and for everyday.  No matter what you’re surrounded by, N matter what storm, no matter what trial, no matter what hardship or temptation, don’t take your eyes off Jesus.  And never doubt.  Easier said than done, I know;   But we can do it, with His ever present help.

Verse 32  says;  “And when they got into the boat, the wind ceased.”  In other words, with Jesus, all storms will end.