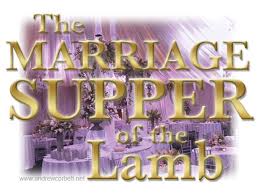 The Supper of the Lamb

Revelation 19, verse 9  says;  “Blessed are those having been invited to the supper, of the marriage of the Lamb.'” And he says to me, “These are the true words of God.”

As the song says..  “All things are ready, come to the feast..”  “Come feast upon the love of God, and drink everlasting life.”

But you know what Jesus said in  Mathew 22, verse 14 ?  He said;  “For many are invited, but few are chosen.”   And unfortunately for so many, these are also “the true words of God”.  Out of the almost innumerable many who are invited, so very few are selected.

Everyone is invited, to become, one of God’s favorite, but few actually attain to their calling.

I’m sure you’re familiar with the words of  1 Peter 2, verse 9;  “But you are a chosen race, a royal priesthood, a holy nation, a people for his own possession, that you may proclaim the excellencies of Him who called you out of darkness, into His marvelous light.”

Speaking of Christians, Paul wrote in  Colossians 1, verse 13;  “He has delivered us from the domain of darkness, and transferred us to the kingdom of his beloved Son.”   The kingdom of Christ is..  “His marvelous light”.    Jesus Christ is..  “The light of the world”   John 1, verse 4  says;  “In him was life, and the life was the light of men.”

But  verse 5  says;  “And the Light shines in the darkness, and the darkness did not grasp it.”  In other words, the people of the world didn’t “take hold” of the Light.  They didn’t “grasp” their very own Savior, sent to rescue them from their sins.

Jesus told a parable, in  Luke chapter 14.   Jesus had been invited, to a supper, at the home of a leading Pharisee, and as always, Jesus began “teaching” those present.  Now the reason this Pharisee invited Jesus to the supper, wasn’t the same reason that God invites us to the supper of His Son.  No, Jesus wasn’t invited so that He could become “a favorite” of that Pharisee.  But rather, the reason was probably so that they could find something against Jesus, to get Him out of the way, because they already didn’t like His teachings.

Luke 14, verse 1  says;  “One Sabbath, when He went to dine at the house of a ruler of the Pharisees, they were watching Him carefully.”  They were just looking for Jesus to do something, or to say something, that they could use against Him.  .

But that didn’t bother Jesus, because He just got right down to “teaching”.  And His “teachings” probably weren’t quite what they wanted to hear.  So here’s what happened, beginning in  verse 2,  of  Luke 14..

“And behold, there was a man before him who had dropsy.”  “Dropsy” is the same as edema, which is a swelling of various parts of the body.  So Jesus gets right down to it, and He asks the Pharisees, and the so called “experts” of the law ,who were there;  “Is it lawful to heal on the Sabbath, or not?”   That was in  verse 3.   And  verse 4  says;  “But they remained silent. Then Jesus took hold of the man, healed him, and sent him on his way.”

And now  verses 5 & 6;  “And he said to them, “Which of you, having a son, or an ox, that has fallen into a well on a Sabbath day, will not immediately pull him out?  And they could not reply to these things.”

Of course Jesus Himself said, in   Mathew 12, verse 8;  “For the Son of Man is LORD of the Sabbath.” But the point here is not whether Jesus is “an exception to the rule”, being “LORD” over it.  The point is, that the Jews were obsessed with the “letter of the law” with almost no regard at all, for “the spirit of the law”.

And so we can easily see, that the “spirit of the law” is love.  Is it lawful to heal a person on the Sabbath?  It is if you love that person.

The scriptures themselves use the analogy of the letter of the law, as compared to the spirit of the law, exemplified in Christ.  Let me read a passage beginning in  2 Corinthians 2, verse 17  (that’s the last verse of that chapter)  and continuing on thru  chapter 3, verse 11..

So here’s what the apostle Paul wrote in this passage;  “For we are not, like so many, peddlers of God’s word, but as men of sincerity, as commissioned by God, in the sight of God we speak in Christ.  Are we beginning to commend ourselves again?  Or do we need, as some do, letters of recommendation to you, or from you?   (Of course here he’s talking about a literal letter that someone might write.  But right away he’s going to speak figuratively)

“You yourselves are our letter of recommendation, written on our hearts, to be known and read by all.”  In other words, the faithful Corinthians were the evidence of the sincerity of the work that Paul and the others did.  When someone becomes a Christian, they are obeying Christ’s commands, “from the heart”.

Paul wrote in  Romans 6, verse 17;  “But thanks be to God, that though you were slaves of sin, yet you obeyed from the heart, that form of doctrine to which you were delivered.”   So, a Christian’s obedience to the gospel of Christ, comes not just from the “letter” so to speak,  of the words spoken, and the words written, but true obedience comes from the heart.   From a loving willingness, to do, as God has instructed.

But back to  2 Corinthians 3, verse 3  and following..  “And you show that you ARE a letter from Christ, delivered by us, written not with ink, but with the Spirit of the living God;  Not on tablets of stone but on tablets of human hearts.  Such is the confidence that we have through Christ toward God.  Not that we are sufficient in ourselves to claim anything as coming from us, but our sufficiency is from God,  (Now there’s a good lesson for us all to learn!  To God be the glory, not to us)

NO ONE can keep the law perfectly;  That’s why “the letter kills”.  Because not keeping the law is sin;  And sin brings forth death!  Thus, “the letter kills”.   ‘But the spirit gives life!”   That’s exactly what Jesus said in  John 6:63;  “It is the Spirit who gives life; The flesh profits nothing. The words that I have spoken to you, are spirit, and life.”

Now Paul compares the old law of Moses, which is spoken of as “the letter of the law”, with the new law in Christ, which is spoken of as “the spirit of the law”.   Paul wrote, beginning in  verse 7;  “Now if the ministry of death, carved in letters on stone, came with such glory that the Israelites could not gaze at Moses’ face because of its glory, which was being brought to an end,  (the old law was being brought to an end)  will not the ministry of the Spirit have even more glory?”

“For if there was glory in the ministry of condemnation, the ministry of righteousness must far exceed it in glory!  Indeed, in this case, what once had glory, has come to have no glory at all, because of the glory that surpasses it.  For if what was being brought to an end came with glory, much more will what is permanent have glory.”

Do you remember when Jeremiah prophesied about the new covenant, in  Jeremiah 31, verses 31 thru 33 ?   Here’s what he said;  “Behold, the days are coming, declares the LORD, when I will make a new covenant with the house of Israel, and the house of Judah;  Not like the covenant that I made with their fathers, on the day when I took them by the hand, to bring them out of the land of Egypt;  My covenant that they broke, though I was their husband, declares the LORD.”

“For this is the covenant that I will make with the house of Israel after those days, declares the LORD: I will put my law within them, and I will write it on their hearts.  And I will be their God, and they shall be my people.”

The invitation is ours, to come to the supper of the Lord, by obeying His every word, from the heart, in love.