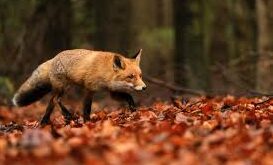 WATCH OUT FOR “LITTLE FOXES”

In the  Song of Solomon, chapter 2, and verse 15,  the scripture says;  “Catch for us the foxes, the little foxes that ruin the vineyards, for our vineyards are in bloom.”

Foxes, with their cute bushy tails can spoil and eat the grapes on the vines.  They burrow holes in the hedges around the garden, and they consume the grapes as they pass through, and the can completely destroy the whole vineyard, if no one is watching.
Those grapes in that vineyard, are kind of like the “fruits of the Spirit”, listed in  Galatians 5:22 & 23.   And our soul, is kind of like that vineyard.  The fruits, of the Spirit of God, that a Christian has come to produce in his life, can be eaten up, and spoiled, by “little things”, that can be likened to “little foxes”.  And if we’re not careful, before you know it, our very soul is ruined.
Let’s take a minute, and read once again, what those “fruits of the Spirit” are, from  Galatians 5:22 & 23;   “But the fruit of the Spirit,   (This is talking about the “fruits” of the Spirit of God!  These are the things that we will exhibit in our lives, if the Spirit of God dwells in our hearts)   “But the fruit of the Spirit, is love, joy, peace, patience, kindness, goodness, faithfulness, gentleness, and self-control. Against such things there is no law.”   These are the things that need to dwell in our hearts.
But there’s these “little foxes”, that can disguise themselves, in the form of “little vices”, and they can eat away at that fruit.  “Little vices”,  like a “small” bad habit, or “little” indulgences of the flesh, or “slightly bad” attitudes, or just a “little bit” of neglect, and many other little things.  And if we neglect these “little things”, they will surely cause us to stumble.  Galatians 5:7  says;  “You were running well.  Who hindered you, not to obey the truth?”  Was it one of those “little foxes” that caused you to stumble?
And so let’s consider some of the “little foxes” that can “eat up” those fruits of the Spirit, as you try to walk with Christ, and as you’re trying to “run your race”.  And we’ve got eight little foxes to talk about..
#1. The little fox of selfishness, spoils our love.  It destroyed King Saul’s love for God, and for David, his for his son Jonathan, and even  himself.   1 Sam. 20:30 & 31  says;  “Then Saul’s anger burned against Jonathan, and he said to him,  “You son of a perverse and rebellious woman!  (He didn’t even want to call him his own son.  Now there’s love grown cold!)  “You son of a perverse and rebellious woman!  Do I not know that you have chosen the son of Jesse to your own shame and to the disgrace of the mother who bore you?  For as long as the son of Jesse lives on this earth,  (that’s David)  neither you nor your kingship shall be established.  Now send for him and bring him to me, for he must surely die!”
#2. The little fox of discontent, spoils our joy.  There’s a story in the old testament, In  the book of  Esther,  about Queen Esther, and Mordecai, and a man named Ha-man’.    Ha-man’ had all he could ask for, but he still wasn’t content;  He wasn’t satisfied.   Mordecai was a Jew, who lived in Persia.  And Mordecai had adopted Esther, his cousin, when she had been orphaned.  And he raised her as if she were his own daughter.  Well, as it turned out, Esther married the king of Persia, and herself became the Queen.  And Esther and Mordecai, (being Jews)  persuaded the king, to retract, an order to kill all the Jews in the country.   And so now Ha-man’ enters the picture.   And the bible says in  Esther 5:10 thru 13;  “.. And calling for his friends and his wife Zeresh, Ha-man’ recounted to them his glorious wealth, his many sons, and all the ways the king had honored and promoted him over the other officials and servants.  What is more,” Ha-man’ added, “Queen Esther invited no one but me to join the king at the banquet she prepared, and I am invited back tomorrow along with the king.  Yet none of this satisfies me, as long as I see Mordecai the Jew, sitting at the king’s gate.”