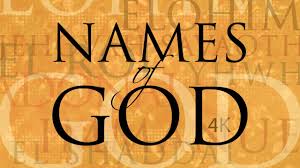 Does God Have a Proper Name ?

Genesis 1, verse 1  says;  “In the beginning, GOD created the heavens and the earth.”   The word “God” is translated from the Hebrew word El-o-heem’, which means “divine” or “divine being”.  El-o-heem’ is the plural form of the word El-o-ah.  And of course most people believe that the use of the plural form of that word, is indicative of the Father, the Son, and the Spirit of God, the “Holy Spirit”.

The letters E-L, make up a short generic form of the word “god”.  “El” can refer to any god.  It can refer to a “god” of man, or it can also refer the true and living God of the bible.  But all three of these words.. El, Eloah, and Eloheem, are all more or less, descriptive words, used in reference to a “divine being”;  The One who is above all others, and above all else.

In the new testament, in  John 1, verse 1,  the word “God” is used twice, in the same fashion.  That verse says;  “In the beginning was the Word, and the Word was with God, and the Word, was God!”   The Greek word there is “Theos” which again, is a generic word used in reference to either “a god”, or used in reference to “THE true and living God of the bible, as is the case in  John 1:1,  and in most of the rest of the new testament.

But let me give you a couple of examples from the old testament, of the use of the word “El” in reference to God.  In  Genesis 14, verses 18 thru 22,  the phrase “El El-yon’ “ is used three times.  “El Elyon” means..  God, Most High.   Let me read those verses to you, and I’ll actually read from  verse 17  thru  verse 23;  This is speaking about when Abram (or Abraham)  came back from rescuing his nephew Lot, from the invading kings of the north.  And the scripture says;  “After his return from the defeat of Chedorlao’mer, and the kings who were with him, the king of Sodom went out to meet him at the Valley of Sha-veh’ (that is, the King’s Valley).

“Then Melchizedek king of Salem brought out bread and wine. He was priest of El El-yon’   (of God Most High)  “And he blessed him (Melchezidec blessed Abraham) and said; Blessed be Abram, by God Most High, Possessor of heaven and earth;  And blessed BE God Most High, Who has delivered your enemies into your hand!  And Abram gave him a tenth of everything.”

“And the king of Sodom said to Abram; Give me the persons, (the other persons that Abram rescued) but take the goods for yourself.  But Abram said to the king of Sodom; I have lifted my hand to the LORD, God Most High, Possessor of heaven and earth, that I would not take a thread or a sandal strap, or anything that is yours, lest you should say; I have made Abram rich.”

What a different mindset Abram had!  Different from the rest of the world.  And different from most people today too!  “Come out from among them, and be ye holy.”  Be ye different!   (2 Corinthians 6:17)

“El” could refer to any god (as if there were other gods)  But, El El-yone’  and  El Shad-Dah’-ee, those names refer to The ONE God!  God Most High, and God Almighty!

Here’s what the scriptures say in  Psalm 91, verses 1 & 2;  “He who dwells in the shelter of the Most High will abide in the shadow of the Almighty.  I will say to the LORD;  My refuge and my fortress, my God, in whom I trust.”   Most High, Almighty, Lord, my God.

Revelation 1, verse 8  says;  “I am the Alpha and the Omega,” says the Lord God, “Who is, and Who was, and Who is to come;  The Almighty.”  That new testament word “Almighty”, means..  “the Ruler of the universe..  The ruler of everything!  The proper definition is..  “All Prevail”.

There’s ten occurrences of that word in the new testament, and nine of them are in the book of Revelation.  The only other occurrence is in   2 Corinthians chapter 6.   The Lord says in  verses 17 & 18;  “Therefore come out from among them and be separate, says the Lord.  Touch no unclean thing, and I will receive you, and I will be a Father to you, and you shall be sons and daughters to Me, says the Lord, Almighty.”  The Ruler of all things.

That Greek word is “Kurios”, and it comes from the word “Kuros” which means..  “Supremacy”.   Now just as a side note, here’s something of interest;  There’s another Greek word that’s similar to “Kurios” which means “Lord”;  And that word is “kuriokos”.  And it means..  “belonging to the Lord”.

Now here’s the interesting part..  The word “kuriokos” is where our word “church” comes from.  The very old pronunciation of the word “church”, is “kuerke”.  Actually, that’s an old German word, translated from the Greek, “kuriokos”.  And over the centuries, it became our English word, “church”.  And it means..  “Belonging to the Lord”.

Now let’s go back to the old testament, and the word “Lord”.  There is a Hebrew word that’s used 6,220 times, and for the Jews, it is considered to be “THE proper name, for God.  In the ancient Hebrew language, the word is spelled YHWH, and the pronunciation has been debated, but ti must have been something like..  “Ya-wa”.  Later on, when vowels were added to the language, the spelling was changed to YAHWEH.  And that is sometimes pronounced  “Yaw-way”, or again, “Yah-wa”.

An old testament word that everyone is familiar with, is “Jehovah”.   But “Jehovah” is simply an English translation, of the Hebrew word “Yah-wah”.  “Jehovah” simply has an extra syllable added to it. So it went from “Yah-wah” in Hebrew, to “Je-ho-vah” in English.

But no matter how you pronounce it..  Yah-wah, or Yah-way, or Jehovah, the scriptures seem to present it as God’s “proper name” you might say.

Consider the first time the word is used in the bible.  It’s in  Genesis 2, verse 4,  and it says;  “These are the generations of the heavens and the earth when they were created, in the day that Jehovah God, made the earth and the heavens.”  Now most modern translations don’t use the word “Jehovah”, but instead, they use the word LORD, in all capital letters.

And here’s one more point that I’d like to make;  In  Genesis 2, verse 4,  and in almost all other verses where the words “Jehovah God” appear, most translations have translated it to say..  “The LORD God”.  But that’s simply not correct.  The word “the” is not in the text, and it shouldn’t be added!   The scripture doesn’t say “the Lord God”, but rather, it says..  “Jehovah God”.  Or Yahweh God.

When you say “THE Lord” it certainly does NOT convey the message, that the word “LORD” is a proper name.  However, when you say it like the original text says it, and you say..  “Jehovah God”, THEN, Jehovah definitely sounds like a proper name.

Now I want to get away from all this technical stuff. even though I find it extremely interesting.  But I want to read you something that I came across this past week.  And although this isn’t scripture, it’s simply an analogy that someone thought of, I think it’s very thought-provoking to say the least.

There was a moment when Moses had the nerve to ask God what his name is. God was gracious enough to answer, and the name he gave is recorded in the original Hebrew as YHWH.
Over time we’ve arbitrarily added an “a” and an “e” in there to get YaHWeH, presumably because we have a preference for vowels. But scholars and rabis have noted that the letters YHWH represent breathing sounds, or aspirated consonants. When pronounced without intervening vowels, it actually sounds like breathing. YH (inhale): WH (exhale).
So, a baby’s first cry, his first breath, speaks the name of God.  A deep sigh calls His name – or a groan or gasp that is too heavy for mere words. Even an atheist would speak His name, unaware that their very breathe is giving constant acknowledgment to God.  Likewise, a person leaves this earth with their last breath, when God’s name is no longer filing their lungs.
So when I can’t utter anything else, is my cry calling out His name?
Being alive means I speak His name constantly.  Is it heard the loudest when I’m the quietest?
In sadness, we breathe heavy sighs.  In joy, our lungs feel almost like they will burst.  In fear we hold our breath and have to be told to breathe slowly to help us calm down.  When we’re about to do something hard, we take a deep breath to find our courage.
When I think about it, breathing is giving him praise.  Even in the hardest moments!
This is so beautiful and fills me with emotion every time I grasp the thought.  God chose to give himself a name that we can’t help but speak every moment we’re alive.  All of us, always, everywhere.  Waking, sleeping, breathing, with the name of God on our lips.

What do you think?  Isn’t that kind of “neat”?  Is it not “thought-provoking” ?   I think it is.  Breathe in, and breathe out.  The scripture tells us in  Genesis 2, verse 7;  “Then the LORD God formed man from the dust of the ground, and breathed into his nostrils, the breath of life, and man became a living being.”

The breath of life, from the source of life..  LORD God in heaven!   Jehovah God.