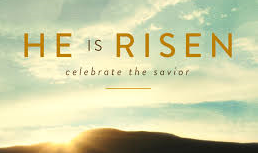 He Is Risen !  Let’s Make Every Day A Celebration

I saw an ad on Facebook, from a church of Christ.  Their advertisement was promoting Easter, and all their special Easter services, and especially their “sunrise service”.   So I left a comment on the page, and I asked;  “What’s a church of Christ doing advertising and celebrating Easter?”   So someone answered, and asked me;  “Do you ask that of all the churches?”

We could simply pay people to attend and listen to the good news.  That would probably work even better than an “Easter Sunrise Service”.   But what happens when the money runs out?  They’d leave us and go somewhere else.  They weren’t interested in the good news anyhow.  Maybe they’d go someplace that offers good entertainment.

You know, providing entertainment, in the quest to fill the building, is practiced all the time by church groups all over this country.  And what if you do fill the building?  So what?  What have you accomplished, except to prove that people like to be entertained?   What would we accomplish if we paid people to hear the gospel?  Absolutely nothing!   Well, maybe we’d help the local economy.  But we don’t have that much money.

Maybe if we were to put on a play, every Easter, and every Christmas, we could probably gain a reputation around town as a pretty good place to go for an entertaining holiday service.  We might even be able to fill the building.  But again, what would we have accomplished?  Nothing, except a reputation around town as a pretty popular place for entertainment.  You could come here, and be assured of a pretty good time, and at the SAME time, get in a little bit of religion, to make you think that somehow you’ve fulfilled your responsibility to God, to BE religious.

Is there something that would be “wrong”, with having a special Easter service, to try to get more people in the door, so that we could preach the word to more people?  Our intention is good, isn’t it?   So then what’s “wrong” with using Easter, as a “draw” to get people to attend?

Well, there’s a couple things wrong with it actually.  The first thing that’s wrong with it, is the name Easter.  The name itself is taken from the idea of a goddess of fertility!   Are we worshipping goddesses now?  Or are we worshipping the one true and living God?  We’re told in  James 2:19;  “You believe there is ONE God, you do well..”  But if you try to bring the name of the goddess of fertility into your religious observances, than I guess you don’t really believe that there is ONE God!   You’re relying pretty heavily on a so called “goddess”.

Well, here’s what He said in  2 John verse 9;   “Anyone who goes TOO FAR, and does not ABIDE in the teaching of Christ, does NOT have God.  The one who ABIDES in the teaching, he has both the Father and the Son.”

“Anyone who goes too far!”   Maybe we don’t put enough emphasis on that phrase “too far”.   What does it mean to go “too far”?    Some versions translate that as “transgressing”.   “Anyone transgressing, and not abiding in the teaching of Christ.”   That makes it sound like it’s sin, doesn’t it?

So the meaning is clear isn’t it?  To go “to far”, is to leave something or someone, and “go on ahead”.   When you “go on ahead” of the teaching of Christ, you leave Christ.   That’s exactly what  verse 9 of  2 John  says.   “Anyone who goes on ahead, and does not ABIDE in the teaching of Christ, does NOT have God!”    To “abide” is to stay with, but to “go on ahead”, and to “go too far”, is to LEAVE Christ, and to LEAVE God.  That’s why the verse says, that that person..  “does NOT have God!”   You have left God, by going on ahead of His teaching, and you have gone “too far”, and you no longer HAVE God.  And when you no longer have God, you are in sin!   Because having God, is the only thing that gets you OUT of sin!

Now this teaching of Jesus, this teaching of God, isn’t difficult to understand, is it?   God the Father, and Jesus Christ, have left us a teaching to follow.  And if we fail to follow it in the first place, we remain in our sins.  And if we follow the teaching, but then “go on ahead” of the teaching, we’re right back in sin.  It’s just like it says, in  Proverbs 26:11;  “Like a dog that returns to his vomit, is the fool that returns to his sin.”

You know, that ought to be good enough right there, for us to see that worshipping God, and remembering Jesus, in a way that is not found WITHIN the teachings of God, is NOT something that we should be doing.   But the bible is full of commands to not add to His word;  Nor to take from His word.

Don’t we take His word seriously?  God said;  “Be sure to make all things according to the pattern!”   Hebrews 8, verse 5.  Which is a quote from  Exodus 25:40.   Do you find Easter within the pattern of new testament worship, or Christian conduct?   No, but you find it within the pattern of pagan worship, and in the worship of goddesses!   When you fail to ABIDE in the teachings of Christ, that means when you fail to “stay within” the teachings of Christ, then you’ve left Christ, and you do NOT have God!  What could be simpler, and easier to understand?

What would happen if you added another “ingredient” to the Lord’s supper?   Well, you’ve gone beyond, and left God behind, that’s what happens.  And you’re out there on your own, in sin.  What happens if we add the playing of musical instruments to our Christian singing?   We’ve left God behind, we’ve sinned.

What happens if you add the Easter bunny, and colored eggs, and good Fridays, and the name Easter, to the resurrection of Christ?  You’ve left God behind, and you’re out there in sin!   That’s what happens!

I’m not trying to be critical here, I’m trying to be honest.  And I’m certainly not ignoring the importance of the resurrection of Jesus Christ.  We’re told in  1 Corinthians 15:17;  “And if Christ has not been raised, your faith is worthless, you are still in your sins!”   We can NEVER discount the importance of the resurrection of Christ.  But we need to honor, and remember His resurrection, in the ways that God has instructed us to honor it, in the bible.

There is one method, specified in the bible, that is by far, the greatest way possible, for us to honor and remember the resurrection of Jesus Christ.   That method is described for us, in  Romans 6, verses 4 & 5.  Here’s the method described;  “Therefore, we have been buried with Him, through baptism, into death, in order that as Christ was RAISED from the dead, (there’s His resurrection)  by the glory of the Father, so we too..  (now here’s where we honor His resurrection)  ..SO WE TOO, might walk in newness of life.  For, if we have become united with Him in the likeness of His death, CERTAINLY, we shall also be in the likeness of His resurrection!”

Romans 6:10 thru 14  explains it clearly;  “For the death that He died, He died to sin, once for all.  But the life that He lives, He lives to God.  Even so, consider yourselves to be dead to sin, but alive to God in Christ Jesus.  Therefore, do not go on presenting the members of your body to sin, as instruments of unrighteousness, but present yourselves to God, as those who are alive from the dead  (You’re resurrected, remember?)  so then, present yourselves to God..  “ALIVE from the dead, and your members as instruments of righteousness to God.”

That is the way God tells us to “celebrate” the resurrection of Christ, every day of our lives!   Not one day a year, but EVERYDAY of the year!   Now there’s one more way in which God has told us to honor Christ’s resurrection, and I’ll get to that in a minute or two.  But there’s always an objection to what the bible says, isn’t there?

Here’s one objection.  Romans 14, verses  5 & 6  says;  “One man judges one day above another.  Another judges every day alike.  Let each man be fully convinced in his own mind.  He who observes the day, observes it for the Lord..”

Now first of all, let me say, that I’ve heard people say;  This means that if you are fully convinced of something in your mind, then that automatically makes that something, OK.   Well, nothing could be further from the truth.  For example;  Many people are fully convinced, that baptism is NOT essential for the forgiveness of sins, but the bible says that it isessential!  So then, just because you’ve become convinced that baptism’s not essential, that doesn’t make it OK.  As a matter of fact, you’ll be lost eternally if you think baptism’s not essential.

And that holds true with any subject.  If you’re convinced that something is not true, when the bible says it IS true, then you’re in a bad situation.

So then, since it’s obvious, that something isn’t “right”, just because you think it is, what are those verses saying..  “Let each man be fully convinced in his mind”?   What it’s saying, is..  Don’t go against your conscience.   Verse 23  says;  “..whatever is not from faith, is sin.”

Whatever you do, make sure that you believe in it.   Verse 22  says;  “The faith which you have, have as your own conviction before God.  Happy is he who does not condemn himself, in what he approves.”

So the bible is talking about your conscience.  But there’s something else that these verses are talking about.   Romans 14, verse 1,  starts out with these words;  “Now accept the one who is WEAK in faith, not for passing judgment on his reasonings.”   Let me point out here, that the word translated “reasonings”, does NOT refer to facts!   “Reasonings” are a man’s speculations.  You might say, they’re his opinions.  That’s why they’re associated with the one who is “weak”.

Listen to  verse 2;  “One man TRUSTS that he may eat all things, but he who is WEAK, eats vegetables only.”   The man who “trusts”, or in other words, the man who “has faith”, has that faith because he knows what the bible says.  And the bible says, in  1 Timothy 4, verse 4;  “For everything created by God is good, and nothing is to be rejected, if it is receive with thanksgiving.”

But the one who is “weak”, doesn’t have that trust, that he can eat all things, because he doesn’t know the word fully enough.

How many days of the year do you want to be separated from God?

What’s “wrong” with celebrating Easter as a religious day?  It does NOT abide in the teachings of Christ.  If someone wants to decorate their homes with bunnies and colored eggs, go right ahead, there’s no harm done.  But please, do not think that we are allowed to bring that kind of thing, into the practice of the Christian religion.