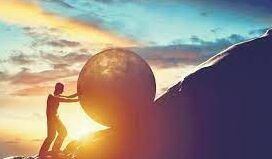 Galatians 6, verse 9  encourages us with these words;  “And let us not grow weary well doing (that means in doing what is good, right?);  So, “Let us not grow weary of doing those things that are good.  For in due season, we shall reap, if we do not lose heart.”   And so we need perseverance don’t we?  And steadfastness.

1 Corinthians 15, verse 59  says;  “Therefore, my beloved brethren, be steadfast, immovable, always abounding in the work of the Lord, knowing that your labor in the Lord, is not in vain.”   Because as  Galatians 6, verse 9  just told us;  “..For in due season, we shall reap, if we do not lose heart.”

And you know, God has always been giving the same advice to His people.  Back in  2 Chronicles 15, verse 7,  the scripture says;  “Be ye strong therefore, and let not your hands be weak: For your work shall be rewarded.”

Here’s what it said in  Proverbs 4:25 & 26;  “Let your eyes look straight ahead, And your eyelids look right before you.  Ponder the path of thy feet, and let all thy ways be established.”   Let your ways be established;  In other words, let them be steadfast.  Plan your actions, plan your behavior, and then establish that, as your path;  And as the path you’re going to continue on;  With steadfastness, and perseverance.

Chapter 11 of Hebrews, (the chapter on faith) tells us of the many, many faithful people of old, who by faith, obeyed God’s word, and persevered hardship after hardship, and and adversity after adversity, till the end of their lives.  And they were all given the promise of an eternal inheritance.

That chapter tells us about Abel, and Enoch, and Noah, and Abraham, and his wife Sarah.  And  Hebrews 11, verse 13  says this about all those people;  “These all died in faith, not having received the things promised, but having seen them, and greeted them from afar, (in other words, they viewed the promise of God, as being “good as gold”, so to speak) and having acknowledged that they were strangers and exiles on the earth.”

You see, that’s talking about their perseverance, and their steadfastness.  And their perseverance came as a result of their faith!  Their faith in God, and in God’s word.  When you know that the promise of God awaits you in heaven, that gives you the perseverance you need, to endure till the end!

It was Jesus Himself, who said, in  Mathew 24:12 & 13;  “And because lawlessness will be increased, the love of many will grow cold.  But the one who endures to the end, will be saved.”  That’s a promise we  can count on!  And so many have already counted on it, and their reward awaits them!

“Behold I cometh quickly (in other words, “suddenly”.  Nobody knows when, but this is our advance notice.  “I cometh suddenly!) and My reward is with Me.”  (Revelation 22:12)

Hebrews 10, verse 36  tells us;  “For you have need of endurance, so that when you have done the will of God you may receive what is promised.”

And  Romans 2:6 & 7  says;  “He will render to each one according to his works:  To those who by perseverance in doing good, seek glory, honor, and immortality, He will give eternal life.”   And his promise is true, isn’t it?

Let’s go back to  Hebrews 11  for a minute though.  God started with the examples of Abel, and Enoch, and Noah, and Abraham, and Sarah;  and God said of them in  verse 13;  “..And they acknowledged that they were strangers and exiles on the earth.”  This world wasn’t their home, and that’s why they persevered so much, so that they could one day GO home, to be with the God of heaven.

But let me read  verses 14 thru 16;  “Now those who say such things, (about being strangers and exiles on the earth)  show that they are seeking a country of their own.  If they had been thinking of the country they had left, they would have had opportunity to return.  But as it is, they desire a better country, that is, a heavenly one. Therefore God is not ashamed to be called their God, for He has prepared for them a city.”

Sometimes we think we face such trials, such difficulties, and our faith and our perseverance can be so easily shaken.  And so God gives us more examples of faithful, steadfast people, Like Isaac, and Jacob, and like Joseph (think of all the trials that Joseph so faithfully faced.  And that he so faithfully endured and overcame!)

And God tells us of Moses, and Rahab;  And now listen to  verses 32 thru 40,  and see if you don’t get encouragement from these verses..

“And what more shall I say? For time would fail me, to tell of Gideon, Barak, Samson, Jephthah;  Of David and Samuel and the prophets;  Who through faith, (and perseverance)  conquered kingdoms, enforced justice, obtained promises, stopped the mouths of lions, quenched the power of fire, escaped the edge of the sword, were made strong out of weakness, became mighty in war, put foreign armies to flight.”

“Women received back their dead by resurrection. Some were tortured, refusing to accept release, so that they might rise again to a better life.  (in that better country)  Others suffered mocking and flogging, and even chains and imprisonment.  They were stoned, they were sawn in two, they were killed with the sword. They went about in skins of sheep and goats, destitute, afflicted, mistreated, of whom the world was not worthy!  Wandering about in deserts and mountains, and in dens and caves of the earth!  And all these, though commended through their faith, did not receive what was promised..”

Now here’s a part that should really give us the encouragement we need, to persevere till the end.  Did you listen to that list of great people of God, and all the things they endured?  But yet, they still haven’t received what was promised;  Even though as the scripture describes them as “..having seen them, and greeted them from afar.”

What more encouragement could the Lord possibly give us?   How about  Ephesians 3:20 & 21;  “Now to Him who is able to do far more abundantly, than all that we ask or think, according to the power at work within us;  To Him be glory in the assembly (in the church, as most versions read) , and in Christ Jesus throughout all generations, forever and ever. Amen.”

God encourages us over and over again, but yet, He warns us about “losing heart”.  Do you remember the opening verse that I read?   Galatians 6, verse 9;  “And let us not grow weary well doing;  For in due season, we shall reap, if we do not lose heart.”

To “lose heart” of course, means to lose your motivation, to give up and to quit trying.  We all need to have perseverance, so that doesn’t happen.  And we need patience.  Patience AND perseverance.  And we also need encouragement, and motivation.  And we can get all those things, right form the scriptures; From God’s word.  But there’s another source for us, for all those things, and that source is one another.

One man gave this as an example of “losing heart”;  You know what it means to “fall off the wagon”, right?  It usually refers to someone who has stopped drinking alcohol, after having a “drinking problem”, but then went back to drinking again.  Well, when that happens, it’s because the person “lost heart”.  They “lost heart” in what they were hoping, and trying to accomplish.  To break a bad habit.  There’s lots of “bad habits” that we can get ourselves involved in, aren’t there.  It doesn’t have to be drinking alcohol.

Maybe a person might get into the habit of using foul speech.  Maybe they can get into the habit of not keeping their promises;  Not keeping their word.  Maybe one’s “habit” might be a lack of consideration for others.  I’m sue you can think of lots of “bad habits” that people can get caught up in.  We need to ‘get on the wagon” and stop those bad habits, if indeed we have any.

You know, that’s an interesting old saying.  Originally the saying was, that someone “fell off the water wagon”.  And that saying dates back to the late 1800’s, when there were these big “water wagons” that were pulled by horses.  What it amounted to, was a wagon with a big tank of water mounted on it.  And they’d use these water wagons, to go around town watering down the dusty streets.  And there was a seat up high on top of the water tank  where the driver sat.

And so it’s said, that during times of prohibition, it was common for men to take an oath that they would quit drinking alcohol, and drink only water.  So they would climb up onto this water wagon, to make a point.  And they’d get up onto the seat at the top, and they’d take an oath, saying that they were going to quit the alcohol, and drink only water.  And so it came to be said, that they were “on the water wagon”.  And then the saying was shortened to “on the wagon”.  And of course if they started drinking alcohol again, they were said to have “fallen off the wagon”.

But the point is, that the person who “fell off the wagon”, had lost their perseverance;  They lost their motivation to stay sober.  You might say, they “lost heart”, as the scriptures put it.   They were fighting “a battle”, but then they “lost heart”, and they quit fighting.  And of course we can always start fighting again, as long as there’s the breath of life within us.  But we never know just how long that breath of life will remain.  And so we need persevere, all the more.

Have you ever “lost heart” over anything?  Have you ever simply felt like you just can’t keep “persevering” anymore?  Well, no matter what trials we may face in this life, and no matter what we need to “persevere” through, the one thing that none of us can afford to “fall off the wagon” over, is our spiritual commitment to God.  We simply cannot afford to stop “pressing on”, as the apostle Paul wrote.

“I press on, toward the goal, unto the prize of the high calling of God, in Christ Jesus.”  (Philippians 3:14)

That was Paul’s goal, and it needs to be our goal as well.  And we surely can’t afford to quit, and fall off “the wagon of faith”.  That’s one wagon we need to stay on for life!

You know, there is someone who’s steadfastness will never fail!  And that someone, is God.

Listen to  Lamentations 3:22 thru 24;  “The steadfast love of the LORD never ceases; His mercies never come to an end;  They are new every morning;  Great is your faithfulness.  The LORD is my portion,” says my soul, “therefore I will hope in him.”

May the Lord be our portion, every day of our lives.  And may we be as steadfast as we possibly can be.

The apostle Paul wrote these words in  Philippians 1, verse 6;  “And I am sure of this, that He who began a good work in you, will bring it to completion, at the day of Jesus Christ.”

We can always trust in the Lord.  And because His promises, we persevere.