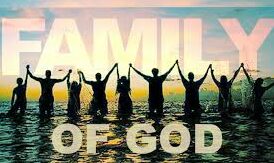 What do You think the Kingdom of God is like?

What else is the kingdom of God like?   Is it like an earthly family?  Yes, in some ways, the kingdom of God, which of course is the kingdom of Christ, IS a lot like an earthly family.  There’s a Husband, which is Jesus the bridegroom, as He’s referred to in  John 3:29,  and in  Mathew 9:15,  and in  Luke 5;34.   The scripture says in  Luke 5, verses 33 & 34;  “Then they said to Him;  John’s disciples and those of the Pharisees frequently fast and pray, but Yours keep on eating and drinking.  And Jesus said to them;  You cannot make the attendants of the bridegroom fast while the bridegroom is with them, can you?”

So in the spiritual kingdom of Christ, Jesus is the husband, the “bridegroom”, and there’s a  wife, or a “bride”.  And the “bride”, is actually the citizens of the kingdom, collectively speaking.   Just like there is ONE “bridegroom” and “husband”, there is also just ONE “bride” or “wife”, which is the kingdom itself!

The scripture says in  1 Corinthians 11, verse 2;  “For I am jealous for you with a godly jealousy;  For I betrothed you to one husband, so that to Christ, I might present you as a pure virgin.”

Ephesians 5:25  tells us;  “Husbands, love your wives, just as Christ loved the church (the kingdom)  and gave Himself up for her.”

So then, in the kingdom of Christ, there’s a husband, and there’s a wife.  But there’s also a Father, and a Son, and all of the brethren.   There’s God the Father;  There’s Jesus Christ the Son;  And there’s all the Christians of the world, who are the brethren, the children of God.

And the bible says in  2 Corinthians 6:18;  “And I will be a father to you, And you shall be sons and daughters to Me, Says the Lord Almighty.”

And so, is the kingdom of Christ, like a family?  Oh yes it is!  Actually, it’s not “like” a family;  It IS a family!  It’s God’s family!   One of the phrases that God uses to describe His family, is “the household of faith”.

That phrase is used in  Ephesians 2:19,  which says;  “Therefore you are no longer strangers and foreigners, but fellow citizens with the saints and members of God’s household..”   We’re citizens of the kingdom, and brothers and sisters, in the household of faith.

And let’s look at another analogy that the bible makes concerning a physical family, and His spiritual family.  We find these words in  Genesis 2:22 thru 24;  “And from the rib that the LORD God had taken from the man, He made a woman and brought her to him.  And the man said: This is now bone of my bones and flesh of my flesh; she shall be called woman;  For out of man, she was taken.  For this reason a man will leave his father and mother, and be united to his wife, and they will become one flesh.”   One flesh, in the physical family.   Two members you might say, but one flesh.

Now let’s listen to  Romans 12, verses 4 & 5,  which is speaking about the spiritual family;  “For just as we have many members in one body and all the members do not have the same function,  so we, who are many, are one body in Christ, and individually, members one of another.”   Members one of another.  One “spirit” you might say.   And  1 Corinthians 12, verse 26  says this about our “oneness”;  “And if one member suffers, all the members suffer with it;  If one member is honored, all the members rejoice with it.”

A physical family is a lot like that too, isn’t it?  The suffering of one, just naturally seems to bring a certain amount of suffering to the others.  In our physical families, we’re simply all affected by the suffering of each member.  And God is saying, in  1 Corinthians 12:26,  that’s the way it should be in His spiritual family.  Let’s read it once more;  ” “And if one member suffers, all the members suffer with it;  If one member is honored, all the members rejoice with it.”

But let’s go back to Romans chapter 12,  and would each of you please try to apply this to yourselves.  I’m going to read  verses 4 & 5  again,  but then I’ll go on.  So her we go, this applies to each one of us;  ““For just as we have many members in one body and all the members do not have the same function,  so we, who are many, are one body in Christ, and individually, members one of another.”

“We have different gifts according to the grace given us.  (isn’t that true?  We all have varying “gifts” from God)  If one’s gift is prophecy, let him use it in proportion to his faith;”  (now of course we know that we don’t possess that particular gift today, but listen to how this continues)  “If it is serving, let him serve;  (is anyone blessed with that gift?)  If it is teaching, let him teach;  If it is encouraging, let him encourage;  If it is giving, let him give generously;  If it is leading, let him lead with diligence;  If it is showing mercy, let him do it cheerfully.  Love must be sincere. Detest what is evil; cling to what is good.”

In other words, when you use your God given gifts, within the body of Christ, that’s one way you show your love for one another.  If you don’t use your gifts, then are you just “hiding” your love.  You know, I rarely quote from the New Living Translation, because it does far too much “paraphrasing”, but listen to what it says;  “Don’t just pretend to love others. Really love them!  Hate what is wrong. Hold tightly to what is good.”   Let us not just pretend, to love, but let us use our God given gifts, for the benefit of one another;  Because indeed, we are members, one of another.

How many of you put tremendous emphasis on your physical family?   I would expect that just about all of you do.  One’s family, is typically, the most important thing to them.  But listen to the value, that Jesus puts on the kingdom of God..

The kingdom of Christ, began with just one man, a man named Jesus.  But from that tiny beginning, is grew quickly, and it grew, and it became larger and larger, until it was home for tens of thousands of souls.  And now today, The kingdom of Christ is home to approximately 2 million souls, living on this earth.  And on top of that, It’s home to every soul that has ever been forgiven by the blood of Christ, form the beginning of time.  Now that’s a kingdom!

In  Luke 13, verse 20,  Jesus asked again;  “..To what shall I compare the kingdom of God?”   And He said in  verse 21;  “It is like leaven that a woman took and mixed into three measures of flour, until all of it was leavened.”   You know, a lot of times the example of leaven is used in the scriptures to refer to sin, but not this time.  No, Jesus isn’t talking about sin here.  He’s talking about the permeating influence of the kingdom of God.

It’s just like that tiny mustard seed, that blossomed and grew into the great tree that supported life for so many birds of the air.  Well, that little bit of leaven, began as such a small amount, but it permeated those three measures of flour, until as the scripture says;  “all of it was leavened”.

Do you know how quantity much a “measure” was equal to?   Here’s what it says in one dictionary..  “a large measure equivalent to nearly three English gallons” (Souter); the measure for grain, “about a peck and a half or somewhat less than one-half bushel (a bushel consists of four pecks) or approximately twelve liters in the metric system”   And just a little bit of leaven, leavens the whole thing.

That’s what the kingdom of God is like.   You start with Jesus Christ, because when you think about it, it’s really Jesus and His gospel, that’s represented by the leaven here.  The whole kingdom of God, began with just Jesus, and His gospel.   Romans 1:16  says;  “..For it is the power of God unto salvation..!”

And you know what the gospel tell people to do;  “Repent and be baptized, every one of you, in the name of Jesus Christ, for the forgiveness of your sins, and you will receive the gift of the Holy Spirit.”   (verse 38)  You’ll receive the promise of eternal life!

And now that little bit of leaven, has permeated the whole world!  And it’s no wonder, because eternal life is what it gives to you.  That great tree, that grew from that tiny mustard seed, provided a home, and provided life, for the birds of the air.   But your life is worth a whole lot ore than just some birds, isn’t it?