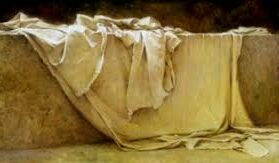 Why did Jesus fold the linen burial cloth after His resurrection?

The Gospel of John, in  chapter 20 and verse 7,  tells us that the face cloth (or napkin) which was placed over the face of Jesus, was not just thrown aside like the grave clothes.  The Bible takes an entire verse to tell us that the napkin was neatly folded, and was placed separate from the grave clothes.  Here’s the reading from  John 20, verses 1 thru 7;  “Early on the first day of the week, while it was still dark, Mary Magdalene went to the tomb and saw that the stone had been removed from the entrance.  So she came running to Simon Peter and the other disciple, the one whom Jesus loved. “They have taken the Lord out of the tomb, she said, and we do not know where they have put Him!  Then Peter and the other disciple set out for the tomb.  The two were running together, but the other disciple outran Peter and reached the tomb first.  He bent down and looked in at the linen cloths lying there, but he did not go in.  Simon Peter arrived just after him. He entered the tomb and saw the linen cloths lying there.  and the face-cloth which had been on His head, not lying with the linen wrappings, but rolled up in a place by itself.”
Some versions say that the face-cloth was “rolled up”, and some say “wrapped” and some say “folded up”.  But the point is, the face cloth, or “napkin” as some versions call it, wasn’t just thrown in the same pile as the rest of the burial wrappings.
Now here’s the conclusion that this particular writer has come to..
Was that important?  Absolutely!  Is it really significant?  Yes!
In order to understand the significance of the folded napkin, you have to understand a little bit about Hebrew tradition of that day. The folded napkin had to do with the Master and Servant, and every Jewish boy knew this tradition.
When the servant set the dinner table for the master, he made sure that it was exactly the way the master wanted it…
The table was furnished perfectly, and then the servant would wait, just out of sight, until the master had finished eating, and the servant would not dare touch that table, until the master was finished. Now, if the master were done eating, he would rise from the table, wipe his fingers, his mouth, and clean his beard, and would wad up that napkin and toss it onto the table.
The servant would then know to clear the table.  For in those days, the wadded napkin meant, ‘I’m done.’
But if the master got up from the table, and folded his napkin, and laid it beside his plate, the servant would not dare touch the table, because……….. The folded napkin meant, ‘I’m coming back!’
He is Coming Back!  Praise The Lord!
Now that’s an interesting little interpretation isn’t it?    You know, a lot of times, we can read a passage of scripture, like  John 20, verses 1 thru 7,  and we can make a number of analogies, comparing the passage, with other things.  Just like this man makes the analogy of the face-cloth, compared to the dinner napkin used at a meal.  And the writer’s final statement is quite true, that the Lord is indeed, “coming back”, There’s really no scriptural evidence that the folded face cloth, is intended by God to have quite that same significance.
Oh I do think it’s a very interesting conclusion.  And it certainly makes for an interesting analogy;  But the scriptures don’t provide any evidence that the story carries with it, the meaning of Jesus returning.  Of course there’s certainly no doubt about the fact that Jesus is coming back.  That fact is paramount to our faith;  It’s paramount to Christianity.
We don’t even have full salvation now, in this life.  “Full” salvation, and “complete” salvation, won’t become a reality until Jesus returns!   That’s when the saved, from all ages, will be gathered together as one kingdom, and as one family, and delivered to God the Father in heaven, to enjoy eternal life, forever!   That’s when “full” and “complete” salvation will become a reality.  Right now we possess “the promise”, but then, we’ll possess the real thing!
1 Corinthians 15:24  says;  “Then cometh the end, when He (Jesus) shall have delivered up the kingdom to God, even the Father;  When He shall have put down all rule and all authority and power.”

1 Thessalonians 4:16 & 17  describes it like this;  “For the Lord himself shall descend from heaven with a shout, with the voice of the archangel, and with the trump of God, and the dead in Christ shall rise first.  Then, we which are alive and remain, shall be caught up together with them in the clouds, to meet the Lord in the air;  And so shall we ever be with the Lord.”   And  verse 18  says;  “Therefore comfort one another with these words.”

Jesus is coming!   Revelation 22:12  says;  “And, behold, I come quickly;  And my reward is with me, to give every man according as his work shall be.”   That’s when the promise of eternal life really becomes a reality!
In  Hebrews chapter 11,  the bible talks about all the faithful people of God, from the beginning if time.  It talks about Abel, and of Enoch, and of Noah, and Abraham, and of Sarah.  And  verse 13  tells us;  “These all died in faith, not having received the promises;”  (they died, without having fully received eternal life, which is promised to the faithful)  “But having seen them afar off;  And were persuaded of them, and embraced them, and confessed that they were strangers and pilgrims on the earth.”
And the chapter goes on to speak of Isaac, and of Jacob, and Joseph, and Moses, and Rahab, and Gideon, Barak, Samson and Jephthah, about David and Samuel and the prophets.  And even though not naming the people specifically, the bible speaks of faithful people  “Who through faith subdued kingdoms, wrought righteousness, obtained promises, stopped the mouths of lions;  Quenched the violence of fire, escaped the edge of the sword, out of weakness were made strong, waxed valiant in fight, turned to flight the armies of the aliens.”  It speaks of  “Women who received their dead raised to life again:  And others who were tortured, not accepting deliverance; that they might obtain a better resurrection.  And others had trial of cruel mockings and scourgings, yea, moreover of bonds and imprisonment:  They were stoned, they were sawn asunder, were tempted, were slain with the sword:  They wandered about in sheepskins and goatskins, being destitute, afflicted, tormented;  (Of whom the world was not worthy:) They wandered in deserts, and in mountains, and in dens and caves of the earth.”
Faithful men and women of God, from the beginning of time.   And then verses 38 & 39  tell us this..  “And all these, having gained approval through their faith, did not receive what was promised;  (They have not received eternal life yet, even to this day!)  Because God had provided something better for us;  So that apart from us, they would not be made perfect.”
All those faithful people of God, still await the fulfillment of the promise;  They still await “complete” and “full” eternal life.  And why do they still wait?  “Because God had provided something better for us;  So that apart from us, they would not be made perfect.”
How does that make you feel, to know that YOU, and all other living Christians, are valued so highly by God, that we, along with all those “famous” people of God, will ALL  receive eternal life together!   We’re included in quite a group, aren’t we?   And Jesus is coming one more time, so that we all can inherit eternal life together.
Let me go back now to the subject of the burial face-cloth of Jesus.  As I said, it’s an interesting analogy to think that that folded facecloth is representative of the fact that Jesus is returning, but there simply isn’t any scriptural evidence which point sot that conclusion.

And so I’d like to read to you from a brief article I came across on the subject.  The article is titled..

Is there a significance to Jesus folding the linen burial cloth after His resurrection?

And here’s what the writer of the article has to say..

I am skeptical about any interpretation of Scripture, which depends entirely upon knowledge that can only be gained outside of Scripture.  (And I think that’s a very good point to begin with)   I’ve seen a number of variations of this theme, but it basically goes like this:

“If you knew this bit of history, or background, or knowledge, known only to a particular group, then you would understand the “deeper meaning” of what this text is saying.”

Back to the article..  I am even opposed to those who say, “If you only knew the Hebrew or Greek language, THEN you would understand what this text is saying.”  (I majored in Hebrew in seminary school, and took more than the required Greek courses.)  My basic conviction is that God has given us all we need, to understand the Bible – all the necessary information, is provided in the Bible itself, and in the Holy Spirit who illuminates it.   (1 Corinthians 2:1 & 2)

And let me go ahead and read those verses for you.  Paul said there;  “When I came to you, brothers, I did not come with eloquence or wisdom as I proclaimed to you the testimony about God.  For I resolved to know nothing while I was with you, except Jesus Christ and Him crucified.”   All we need, is in the word of God.

Can a knowledge of the original languages and Bible history be helpful at times?    Yes, it can be very helpful, at times.   But is it so essential to an understanding of the Bible, so that only the elite (who possess these abilities) can know what God’s Word means?  No!

In regards to the subject of the burial face-cloth;  If only those who were personally familiar with the Jewish customs of the day, could understand this scripture, then God has certainly not done a very good job of revealing His will to mankind, has He?

And it’s the same with several passages of scriptures.  We certainly don’t have to have “been there” and “done that” to understand God’s will.  Now I will concede this however.  If we had been there, and if we had been a part of the culture back then, maybe we wouldn’t need to study quite so hard to understand all of what the bible has to say.  But I know that we can all rest assured, that in the words of the bible, God has, through His divine power..  “..given us everything we need, for life and godliness, through the knowledge of Him who called us by His own glory and excellence.”  (2 Peter 1, verse 3)

The writer of that article closes with this thought..
My sense is that most commentators and students of the Bible, understand this folded cloth, to indicate that the scene in the empty tomb, was evidence of a very calm and orderly process took place, rather than that of a burglarized tomb, from which the body of Jesus was hastily stolen — from a sealed tomb, guarded by soldiers.
The scripture says, in  John 20, verses 6 & 7;  “Simon Peter arrived just after him.  He entered the tomb and saw the linen cloths lying there, And the napkin, that was about his head, not lying with the linen clothes, but wrapped together in a place by itself.”
I  would rather think that it you were going to steal a dead body, after the better part of three days, that you surely wouldn’t unwrap it first, and lie the the wrappings here, and the face cloth neatly there.