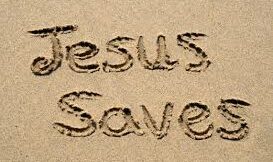 What Actually Saves Us ?  Its’ More Than You Think !

One of the most popular passages in the entire bible, is  Ephesians 2, verses 8 & 9,  which says;  “For by grace you are saved, through faith, and this not of yourselves; it is the gift of God, not as a result of works, so that no one may boast.”

And the reason that’s such a popular passage, is that it’s the #1 passage that people go to, in their efforts to support the doctrine of faith only.  And “faith only” is a very popular doctrine among those who claim Christianity as their religion.  But of course, that verse  (verse 8)   doesn’t say that anyone is saved by faith only, does it?  No, it doesn’t.  As a matter of fact, it doesn’t even say that anyone is saved by faith at all!  What it says, is that “by GRACE you are saved”.   Not “by faith you have been saved”, but “by grace you have been saved”.

Now there is a verse where Jesus said to someone;  “..Your faith has saved you; go in peace.”   That’s in  Luke 7, verse 50,  but that was while the law of Moses was still in force, and so we’re not even going to consider that verse here this morning.  Because we’re going to talk about what actually saves us today!  Today we live under the new covenant law of Christ, not under the old covenant law of Moses.  So then, what actually saves us today?

And the bible says clearly, that God’s grace saves us!   But of course that verse doesn’t say that the grace of God ALONE saves anyone, does it?  No, it’s certainly does not, even though many people come to that conclusion.  Since the bible says;  “For by grace you have been saved..”  they conclude that it means by grace ONLY!   And you know what?  If the bible didn’t say anything else about what saves us, I’d also conclude that it was by grace alone.  But of course the bible says plenty, about what ELSE saves us.  And so it would be pretty reckless, and irresponsible, to say that it is grace alone that saves anyone.

You have to have God’s grace, because without that, you don’t have an ice cube’s chance in you know where, of being saved.   So then, it all begins with God’s grace.   Without God’s kindness, and without His favor toward us, and without His love toward us, we don’t have a chance in the world.  But, “God so loved the world, that He gave His only begotten Son..”   (John 3:16)  “..That whosoever believes in Him, should not perish, but have everlasting life.”   Whosoever has faith in Him.  Grace, through faith.  God’s Grace is only useful to us, through believing in Jesus Christ.  Without that, God’s grace becomes of no value to us at all.

And  Romans 5:8  tells us;  “But God demonstrates His own love toward us, in that while we were yet sinners, Christ died for us.”   That’s grace!  God’s kindness and favor, toward undeserving human beings.  Jesus Christ is the demonstration of God’s grace!  He is the proof of God’s love toward us!

Listen to  Romans 5, verses 1 & 2;  ” Therefore, having been justified by faith, we have peace with God, through our Lord Jesus Christ, through whom we have gained access, by faith, into this grace, in which we stand.  And we rejoice in the hope of the glory of God.”   By FAITH in Jesus, we have PEACE with God, and access, into the GRACE of God, in which we stand.   To stand in God’s grace, is to stand in faith, in Jesus Christ.  And to stand in faith in Christ, is to stand IN Christ.

We have all fallen, from the saved condition that we were born in, that we so to speak, “stood in”.  Maybe you didn’t know that newborn babies could stand, but they can!  And they do!  They all “stand” in their sinless and “saved” condition.  But if we live long enough in this world, we fall from that sinlessness, don’t we?  And we no longer “stand” in that saved condition.  We “fall” into sin, and we grope around in darkness, and we’re lost in that darkness.

But by the grace of God, through the use of our faith in Jesus Christ, we are once again lifted up, and made to stand, in salvation.  Jesus IS, the salvation of God.  Even the name Jesus means..  God saves!

Remember when John the baptist, saw Jesus walking along the shore of the Jordan river, and he said, in  John 1:29;  “..Behold!  The Lamb of God, who takes away the sin of the world!”

So then grace saves us, and faith saves us, and our deeds save us.  What kind of deeds serve to save us?  Deeds of obedience to God serve to save us, because as we’re told in  Hebrew 5, verse 9;  “And having been made perfect, He (that’s Jesus) became the source of eternal salvation, to all who OBEY Him.”

Romans 5, verse 10  tells us;  “For if, when we were enemies of God, we were reconciled to Him through the death of His Son, how much more, having been reconciled, shall we be saved through His life!”   That verse says that the LIFE of Jesus saves us.  That’s interesting;  It doesn’t mention our faith, and it doesn’t mention our deeds of obedience, and it doesn’t even mention God’s grace!  Or does it?  Remember what it says in  John 3:16?   “God so loved the world, that He gave His only begotten Son..”   God gave us the LIFE of His Son.  And Jesus the Son, gave His LIFE!  By the very life of Jesus, we can be saved.

Did God make Christ to BE sin?  That’s how that verse is translated.  “God made Him, who knew no sin (He committed no sin) to BE sin on our behalf..”  Was Jesus the embodiment of sin, or was Jesus the embodiment of righteousness, and obedience?   The verse says that He committed no sin.   1 Peter 1:19  says that we were redeemed,  “..with the precious blood of Christ, as of a lamb without blemish and without spot.”   No spot, no blemish, no sin!   1 John 2, verse 1  refers to Jesus as..  “the Righteous One”.

You see, that little word that’s translated “BE”, is used 572 times in the new testament;  And in the NASB, it is translated in over 90 different ways, meaning that is how many slightly different meanings that the word has.  And that’s the case with many, many words.  And that’s why we need to study.

That’s what Jesus did, with OUR sin, when He died on the cross.  He bore it, He carried it, He dealt with it, He exposed it, He offered it, He presented it, and He satisfied it!   And as we’re told in  1 John 2, verse 2,   “..He is the PROPITIATION for our sins: And not for ours only, but also for the sins of the whole world.”   The “propitiation” means..  the atonement, and the appeasement, and the payment, and the sacrifice, and the satisfaction, for the sins of everyone;  If everyone would simply believe and obey.

Now just briefly, I want to share with you some other things, that the bible says, “saves us”..

Mathew 10:22  says;  “And ye shall be hated of all men for my name’s sake:  But he that ENDURES to the end shall be saved.”   We are saved through our endurance;  The endurance of our faith.

And here’s one last thing that I want to mention that saves us.   James 1, verse 21  exhorts us, saying;  “Therefore, putting aside all filthiness, and all that remains of wickedness, in humility receive the word implanted, (the word which has been planted in our hearts and minds) which is able to save your souls.”  The Word of God, saves us!