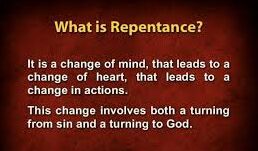 Even though the word Repentance, only has one “R” in it, there are really 5 R’s, to true Repentance.  And those 5 “R’s” would be..

Recognition of sin;  Remorse for sin;  Resolve over sin;  Reformation from sin;  and Restitution for sin .   And we’ll touch on each one of those 5 “R’s” in a little while.

There’s more to understand about the word “repent” than you might think.  The original Greek word is  “met-an-o-eh’-o”.  And a common definition of that word is..  “to change one’s mind or one’s purpose”.   Here’s a definition that’s a little more precise though..  “to think afterwards” or, “to reconsider”.   The point of thinking “afterwards” and of “reconsidering”, is that there was obviously something specific that occurred, which prompted you to think differently.

Previously, sin didn’t really matter to us, because we didn’t really understand the truth about it.  But after we learn the truth, and after we come to BELIEVE the truth, then we “repent” of our previous way of thinking.

That word “repent” is one of those “compound words”.   It comes from two root words;  One word refers to “accompaniment”, (such as having been with someone, or something)  And the other word means..  “to think”.

Let me ask you a question..  How does one acquire faith?   Well,  Romans 10:17  tells us;  “So then faith comes by hearing, and hearing, by the word of Christ.”   That verse is referring to exactly the same kind of “hearing” as Jesus was talking about.

It’s kind of like having been with the Lord.  Having been deeply in thought with His word, God has accompanied you;  And you’ve allowed yourself to be led by His word, in your thoughts, and in your conclusions, and in your beliefs.  And as a result of all of that, you may well have reconsidered a few things.

You know, afterwards, after having spent this time with God and with His word, you’ve probably thought again;  About things you’ve done in your life, and maybe you’ve changed your mind about a few things.  A few things that maybe weren’t quite “in line” with what God has said.  Maybe God’s word led you to repent of some things.

Do you remember what the bible says in  Acts 17, verse 30 ?   It says that in the past, there was a time when God overlooked the ignorance of men, in not knowing the true a living God.  But it says that time is past, it’s gone.  God doesn’t “overlook” such ignorance any longer.  Here’s what that verse says exactly;  “Therefore having overlooked those times of ignorance, God is NOW declaring that all men everywhere, should repent.”

And  verse 31  gives us the reason WHY all people everywhere must repent.  And here’s the reason..  “Because he hath appointed a day, in the which He will judge the world in righteousness, by that man whom He hath ordained;  whereof  He hath given assurance unto all men, in that He hath raised Him from the dead.”

But you know, when talking about what God means, when He tells us to repent, it goes a bit farther than just what those definitions said.  Even thought the true definition of repent, means..  “to change your mind”, biblically speaking, in other words, as GOD uses the word, it means MORE than just a change of mind.  It also means a change of behavior;  A change of our actions!   It’s not enough just to change your mind, and say..   You know, I was wrong in what I thought.

Well, that’s exactly how it is with repentance.  A change of mind, without a change of actions, is dead, being alone.  They just simply have to go together;  There’s just no other way.

And so with all of that being said, let’s review those review those 5 “R’s” of Repentance.  Do you remember what they were?

And that comes about as we spend time with God in His word, and learn what it teaches us.   It’s a part of “hearing” the word.   Psalm  51, verses 1 thru 4,  says this;  “..Have mercy upon me, O God, according to Thy lovingkindness: According unto the multitude of Thy tender mercies, blot out my transgressions.  Wash me thoroughly from mine iniquity, and cleanse me from my sin.  For I acknowledge my transgressions, and my sin is ever before me.”

Now that’s quite the prayer for forgiveness, that King David spoke, before the Lord God.  But David hadn’t always recognized his own sin.  No, it took the prophet Nathan, sent from God, to confront David about his sin, and to “help” him recognize his sin.  THEN, afterwards, then David had second thoughts.   After God’s word was brought to David, then he recognized his sin and repented.

The second “R” is the “Remorse for sin”

Listen to what the apostle Paul wrote to his Corinthians brethren, in  2 Corinthians 7, verses 8 thru 11;  “For though I caused you sorrow by my letter, (Some of the Corinthians had been involved in some grievous sins, and Paul told had rebuked them sharply for it)  So Paul says..  “I do not regret it;  Though I did regret it, for I see that that letter caused you sorrow, though only for a while.  Now I rejoice, not that you were made sorry, but that your sorrow led to repentance.  For you were made sorry in a godly manner, that you might suffer loss from us in nothing.  For godly sorrow (that’s the kind of sorrow we feel when we know we have sinned against God, and maybe others also) “For godly sorrow produces repentance, leading to salvation, not to be regretted;  (Surely no one regrets anything that helps lead them to salvation)  But the sorrow of the world, produces death.  (Everything “of the world” produces death, doesn’t it?)  For observe this very thing, that you sorrowed in a godly manner:  What diligence it produced in you, what clearing of yourselves, what indignation, what fear, what vehement desire, what zeal, what vindication!  In all things you proved yourselves to be clear in this matter.”

The third “R”, is the “Resolve over sin”

Your determination, to change your mind about sin;  About not being a part of sin;  And to be forgiven of sin!   Proverbs 28:13  says;  “He who conceals his sins will not prosper, but whoever confesses and renounces them, will find mercy.”   I’m sure truer words, could not be spoken!   Verse 14  says;  “How blessed is the person who fears always;  But one who hardens his heart, will fall into disaster.”  We need to be resolved, and be full of reverence, for God and for His word.

Remember this hymn?   “I am resolved, no longer to linger, charmed by the worlds delight;  Things that are higher, things that are nobler, these have allured my sight.”   Resolved to turn FROM the world, and to turn TO God!

Romans 12, verses 1 & 2  exhorts, and encourages us with these words;  “I beseech you therefore, brethren, by the mercies of God, that you present your bodies a living sacrifice, holy, acceptable unto God, which is your reasonable service.  And be not conformed to this world, but be ye transformed,  by the renewing of your mind, that ye may prove what is that good, and acceptable, and perfect, will of God.”  That’s what “resolve” is!   “Be ye transformed, by the renewing of your mind..”   And how do you do that?  You do it by being accompanied always, by God’s word.  And let those words and thoughts change your mind, and renew it.

And the fourth “R” of Repentance, is  “Reformation from sin”

John the baptist, told the Pharisees, and the Sadducees, in  Mathew 3, verse 8;  “Therefore bring forth fruits, worthy of repentance.”

We’re told in  Ezekiel 18, verses 21 & 22;  “But if the wicked will turn from all his sins that he hath committed, and keep all my statutes, and do that which is lawful and right, he shall surely live, he shall not die.  All his offenses which he has committed, will not be remembered against him;  Because of his righteousness which he has practiced, he will live.”

We simply will not make it, without a change of behavior.  We’ve all sinned and fallen short..  Romans 3:23.   Do you know what our new attitude in life needs to be?   Galatians 2, verse 20  tells us;  “I have been crucified with Christ, and I no longer live, but Christ lives in me. And the LIFE which I now live in the flesh, (My lifestyle) I live through faith in the Son of God, the One having loved me, and having given up Himself for me.”

“..if we walk in the light, as He is in the light, we have fellowship with one another, and the blood of Jesus His Son cleanses us from all sin.”   1 John 1, verse 7.

And finally, the fifth “R” of Repentance

And this is one that you might to have thought of.  But the fifth “R” is “Restitution for sin”.

Did you hear about the boy who wanted a new bicycle, but he didn’t have the money to buy one, and so he decided to steal one.  Well, he knew right from wrong, but sometimes our mind can try to justify our actions.  And so he thought, I’ll steal the bike, and then afterwards, I’ll simply repent, and everything will be OK.   But it doesn’t quite work that way does it?  No, you need to make restitution, if at all possible.   You can’t keep something you stole, and you can’t just ignore a wrong done, and call it repentance.

A man named Zacchaeus came to Jesus looking for forgiveness.  And Zacchaeus said in  Luke 19:8;  “Behold Lord, half of my possessions I give to the poor;  And if I have defrauded anything of anyone, I restore it fourfold.”

But hopefully we’ve not been guilty of defrauding anyone, or stealing from anyone.  So how do we make restitution for our sins?  How do we make restitution for an unclean thought, or an unkind word;  You can’t un-ring a bell, can you?   What if our sin is a failure to do, what w know should have been done?  I suppose that sometimes, a heartfelt apology, and a heartfelt prayer, might be all the restitution that is possible.  And so I suppose the point is, we must do, whatever is needed, and whatever is possible, to make right, what’s been wrong.