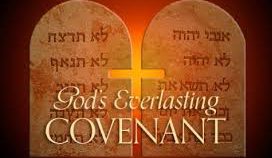 Today I want to continue our study about God’s covenants.  And I want to show you how God’s covenants, are intertwined, with God’s eternal “purpose”, which is the salvation of man’s soul.  Often times, we refer to this “eternal purpose”, as God’s “plan of salvation”.   But in  Ephesians 3, verse 11,  God calls it His “purpose”.  Here’s what it says there;  “According to the purpose of the ages, (the eternal purpose) which He set forth, in Christ Jesus our Lord.”

And the covenants that God made with man, are indeed, “according” to this “purpose of the ages”.  In other words, God’s covenants, play an integral part, in the salvation of man.

The main prerequisite, in saving man, is the forgiveness of sin, and the overcoming of sin, because sin, is the very thing that we are being saved, from.  Sin has the power, to rob us of salvation, an so that power, had to be overcome, it had to be taken away.  And the one who God “purposed” to take away the power of sin, is Jesus Christ, the Lord.  Jesus is Lord, even over the power, and authority of satan and of sin.

You’ll probably remember from last week’s lesson, that God promised, in  Genesis 3, verse 15,  that someone would indeed come, who would be “born of a woman”, (Galatians 4;4)  and who would take away the power of sin, thereby making our salvation possible.

The “seed of the woman”, the scripture says, would crush the power of sin.  God said to satan, satan being the very epitome of sin;  “He (the Christ, the seed of the woman)  shall bruise your head.”  And we learned that the word “bruise”, sometimes refers to just a slight bruise, but in this case, in this context, it means.. “to overwhelm, and to break, and to crush”.  God’s purpose of the ages, was that Jesus the Christ, should overwhelm and break, the power and authority of sin, which is epitomized by satan;  Thereby “crushing his head” so to speak, but literally, breaking and overwhelming and crushing,  satan’s authority.   So then, there’s the promise from God, not only to satan, that the spirit of satan will be overwhelmed and broken, but it was also a promise to man, that satan and sin, shall be overcome.

The Promise to Abraham

Now let’s go to the promise given to Abraham, and the covenant made with him and his offspring.  The promise is the promise of eternal life, through the seed of Abraham, namely, Jesus the Christ.   Galatians 3:16  says;  “Now to Abraham were the promises spoken, and to his seed.  He saith NOT, and to seeds, as of many, but as of ONE, and to thy SEED, which is Christ!”

Now let’s talk about the physical covenant that God made with Abraham and with his seed.  God promised to give to the offspring of Abraham, the whole land of Canaan, as an everlasting possession.  And as a requirement of receiving that promised land, Abraham was told, in  Genesis 17, verse 1;  “Walk before Me, and be thou without sin.”  And of course that applied to Abraham’s offspring as well.  “Walk before God, in righteousness, and be without sin.  And God said to Abraham, in  verse 2;  “And I will make My covenant between Me and you, and will multiply you, exceedingly.”

And God said to Abraham, in  verse 8;  “And I will give unto you, and to your seed after you, the land of your sojournings, all the land of Canaan, as an everlasting possession, and I will be their God.”

The “Whole” of God’s Law

And we’ve also got the covenant, which is in force, between God, and Abraham and his offspring, concerning the land of Canaan;  “The Promised land”, which is evidenced by the circumcision, of all the males.

Now, let’s fast-forward about four hundred years, to the time when the nation of Israel, is being led out of slavery in Egypt, by the hand of God.  Of course this is the very nation of people, that God had promised to bring forth, from the seed of Abraham.  God said to Abraham, in  Genesis 15, verses 13 & 14;  “Know of a surety, that your seed shall be sojourners in a land that is not theirs, and shall serve them, and they shall afflict them, four hundred years.  And also, that nation whom they will serve, will I judge, and afterward, they shall come out with great substance.”

So here comes the nation of Israel, the sons of Jacob, the grand-son of Abraham;  And they’re being led by Moses, out of Egypt, and they stop at Mt Sinai, and Moses is called by God, to come up to the top of the mountain, and God gives Moses and to all of Israel, the ten commandments, and God even writes these commandments in stone!

The bible says in  Exodus 34, verse 28;  “And He (God) wrote upon the tablets, the words of the covenant, the ten commandments.”   Now these ten commandments, along with all the other laws which God gave to Moses, to give to the nation of Israel, were for the purpose of guiding their lives, when they arrived in the land of Canaan.  Of course they were going to guide the Israelites as they journeyed in the wilderness too, but all these laws were specifically designed, to guide their lives when they arrived in the promised land.

God said, in  Deuteronomy 8, verse 1;  “All the commandment which I command you this day, shall you observe to do, that you may live, and multiply, and go in and possess the land which Jehovah promised unto your fathers.”

So it would seem that we’ve now got two covenants, that God has made with the seed of Abraham.  The one that God made directly with Abraham, four hundred years earlier, and now the one that God is making with Israel, Abraham’s seed, now that they have come out of Egypt.  It sounds like two covenants, however, the bible treats these two covenants, and speaks of them, as if they are in reality, just one covenant, and one single “set” of laws.

Let me give you an example of this, and basically, proof of it;  God says in  Galatians 3, verses 18 & 19;  “For if the inheritance is of the law (he’s talking about the law of Moses) it is no more of promise;  But, God has granted it to Abraham by promise.  Why then the law?  It was ADDED because of transgressions, (because of sins) till the seed should come, to whom the promise had been made;  And it was ordained through angels, by the hand of a mediator.”

The Law of Circumcision

And here’s further evidence, that the law of Moses, was actually integrated into the covenant made with Abraham and the future nation of Israel;  Listen to what the bible says, in  Galatians 5, verses 3 & 4;  “Yea, I testify to every man who receives circumcision, that he is a debtor to do the whole law.”  (The “law” that is being spoken of there, is the law of Moses)

“You are severed from Christ, you who would be justified by the law.  You are fallen away from grace.”   Remember that these are the words inspired by God Himself.  And God is including the law of circumcision, as a part of what God calls,  “the whole law”.

Now, what covenant originally included the law of circumcision?  It was the covenant made with Abraham and his offspring.  Once again, here’s what God said in  Genesis 17, verse 10;  “This is My covenant, which you shall keep, between Me and you, and your seed after you;  Every male among you, shall be circumcised.”

But now, God is including that law of circumcision, as a part of what He calls “the whole law”, including the law of Moses, which governed the Jews, up until the establishment of the new covenant of Christ.  That’s interesting isn’t it?  The covenant made with Moses and the nation of Israel, was integrated into the covenant made with Abraham and his seed, who became the nation of Israel.   Israel wasn’t living under two separate covenants, but rather, the two covenants, were brought together, to make one, “whole law”, which governed Israel.

But here is what most of the Jews failed to understand, and what almost everyone today fails to understand;  Although God has made covenants with us, and although He has given us laws which govern our lives, it is NOT the keeping of those laws, that saves us.  It is our FAITH that saves us.  The keeping of the laws which we live under, is the EVIDENCE of our faith, and it is the RESULT of our faith.

How to be Saved

Now let me close today, by going back to what I began with today.  I began by saying;   “I want to show you how God’s covenants, are intertwined, with God’s eternal “purpose”, which is the salvation of man’s soul.”

So then I want you to understand HOW, God’s “whole law”, was used to “save” a person.  Remember, that God’s “whole law”, was a combination, of His covenant with Abraham, which included the law of circumcision..  And the covenant of the ten commandments, along with all the other laws which God gave through Moses.  That’s what made up the “Whole law” of God, before, the establishment of the law of Christ.

So then, how did that whole law, “save” anyone?   Remember..  Galatians 3, verse 11  says;  “Now that no man is justified by the law, before God, is evident; For, the righteous, shall live by faith.”   But the next verse,  verse 12,  tells us exactly HOW, people were saved, under that covenant, and under that covenant.   Verse 12  says;  “And the law is not OF faith, BUT, the one having done these things, (having done what the law says) will LIVE, by them.”

Salvation, was granted, by “having done” what the law says.  The verse says, that “having done these things..  you will live!”   It was solely a matter of faith in God;  Faith, that if a person did, what God told them to do, God would grant them salvation.  It was the very same then, as it is now;  It WAS and IS, a matter of faith and obedience.

The laws have changed, but the PURPOSE, of the laws, has not changed;  And the requirements of salvation, have not changed.  God has not changed!  And God has not even changed His mind, because this was ALL, “According to the purpose of the ages”,  Ephesians 3, verse 11.