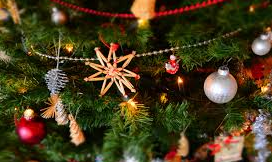 The bible tells us, in Ecclesiastes 3, verse 1;  “For everything, there is a season, and a time for every purpose under heaven.”  A “season” is a definite, appointed time;  A “time” appointed by God.  We’re told in  verse 2;  “There is, a “time to be born, and a time to die”.   Galatians 4, verse 4  says;  “But when the fullness of time came, God sent forth His Son, born of a woman, born under the law.”  “In the fullness of time!” God sets the schedule, God determines the time.  And although God didn’t reveal to us what time that was, when He sent forth His Son, we can be assured, that it was at the exact time, that God had determined.

For example;  God has told us the day in which Jesus died, and even the approximate hour of that day.  The day was the “day of preparation” for the Jewish sabbath, which would make it a Friday  (Luke 23:54).   And the approximate time of day, was shortly after the “nineth hour” of the Jewish day  (Luke 23:44)  which was about 3 o’clock in the afternoon.   But again it’s interesting, that there is no mention in the bible, about celebrating the “day”, nor the “hour” of Christ’s death.  However, the bible DOES tell command us to celebrate Christ’s death, and it DOES tell us which “day” of the week to celebrate it on.  But interestingly, the celebration of Christ’s death, doesn’t take place on the “day” that He died, but rather, on another day, which the Lord has specified, in the bible.

The celebration of the death of Jesus Christ, is the memorial that is called “the Lord’s supper”.  (1 Corinthians 11:20)   Verse 26  says;  “For as often as you eat this bread, and drink the cup, you proclaim the Lord’s death till He come.”  And Jesus Himself said, in  Luke 22:19;  “This do in remembrance of Me.”  So then, “the Lord’s supper” is a memorial, and a proclamation, of the death of Jesus.  A common expression used in the bible, to refer to the Lord’s supper, is to “break bread”, or the “breaking of bread”.  That phrase is used in  Acts 2:42,  and in  1 Corinthians 10:16.   And then in  Acts 20, verse 7,  the bible specifies the day in which the breaking of bread was to be observed.  That verse says;  “And upon the first day of the week, when we came together to break bread..”

And so you can easily see from the bible itself, that God has ordained a specific “time”, when Christians are to come together, and observe the death of Jesus Christ, that time being, the “FIRST day of the week”.  “For everything there is a season, and a time for every purpose under heaven.” God’s specified “time” and God’s specified “season” for celebrating the death of Christ, is the first day, of every week, of your life.

How Do You Feel About Christmas?

But concerning “Christmas”, we as Christians, need to be careful about how we feel, about Christmas, and how we act, towards Christmas.  And I know that many of us like to be involved in some of the activities, typically surrounding Christmas, like card giving, and gift giving, and decorating our houses, and things like that.  And of course there’s nothing wrong with any of those things, in and of themselves.  Don’t we often decorate our houses, in the spring and summer, with things associated with those seasons?

And in the fall or winter, don’t we sometimes change things around to reflect those seasons. And we give cards and gifts at various times of the year.  For example, there’s birthdays, and anniversaries, and graduations, and occasions like that.  But we don’t intermingle those things, with our religion, do we?

And so for many people, Christmas IS, THE, full blown, religious “event of the year”.  And to others, it has become  kind of an “intermingling”, of the traditions of men, involving the fun of decorating, and of gift giving, and of parties, and of celebrating, along WITH their religion.  But those two things really don’t mix.

The words of Jesus, from  Mathew 15, verse 9,  couldn’t be more befitting, as in this situation, and they tell us exactly how God feels about these things.   Jesus said;  “But in vain do they worship Me, teaching for doctrine, the commandments of men.”  The phrase, “teaching for doctrine”,  refers to.. setting something forth, as if it were GOD’S doctrine, while in reality, it’s only the doctrine and practice of men.  And doing that, will make our worship vain.  And if our worship is vain, then our religion is vain.  And when we invoke the name of Jesus Christ, in our personal practices, then without any doubt, we do, intermingle our personal practices with our religion, and once again, our worship and our religion, will be vain.

It seems to me that it’s inevitable, that this gets into the very heart of the teaching of  2 John, verse 9,  which says; “Anyone, who goes too far, and does not ABIDE in the teaching of Christ, does NOT have God!”  That’s a verse that has a bearing on our entire life.  We need to be so careful, that we do NOT go beyond what the teaching of the bible authorizes.   We have much freedom and latitude in our personal activities and entertainment, as long as what we do does not conflict with any of the teachings of the bible.  But when it comes to religious celebrations, and the worship of God, that’s where our freedom and latitude ends, and strict obedience to the instructions of God begins.

Once again, our personal practices, and our religious practices, do not mix!

We Could Solve the Problem

In a lot of places, there’s a celebration called “Oktoberfest”.  And I’m told that in California, there’s a celebration called “Winterfest”.  And that’s probably also “intermingled” with “Christmas”, but it doesn’t have to be.  As a matter of fact, it shouldn’t be!  We can have an “Oktoberfest” and we can have a “Winterfest”, without having a “Christ-fest”.  The only organized activity which is authorized by God, in which we “celebrate” God and Christ, is the worship assembly, on the first day of every week.  In essence, it’s a “Christ-Fest” for the Christian.

Our personal celebrations, should NOT in any way, be intertwined, or intermingled, with our practice of Christianity.  That’s the point, of the whole matter.

So, we’ve heard lots and lots, from the bible this past year, and now we’ve even heard a little that’s not in the bible. But isn’t the word of God important enough to us, that we should explicitly stick to what it does say?  “Anyone who goes too far, and does not abide in the teachings of Christ, does not have God.”  That sounds pretty important!

We wish you all a very merry Winter Season!