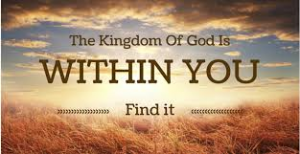 How Can We Describe God’s Kingdom?

Jesus says in  verse 24;  “The kingdom of heaven may be compared to a man who sowed good seed in his field. But while men were sleeping, his enemy came and sowed tares also among the wheat, and went away.  But when the wheat sprang up and bore grain, then the tares became evident also.”

Jesus isn’t talking about an earthly kingdom here, He’s talking about a “heavenly kingdom”, in other words a “spiritual kingdom”.   The exact words here, are..  “THE kingdom, THE heaven”.   THE kingdom, means that there’s only ONE kingdom being spoken of here, and THE heaven, means that there’s only ONE heaven being spoken of.   That one heaven, is the abode of God, and there is not one thing physical where God abides;  There is only the spiritual.  Therefore, that one kingdom, is a spiritual kingdom.

That doesn’t sound like a difficult concept to understand.  But yet the people of Jesus’ day, failed to grasp the idea of the kingdom of God, being a strictly spiritual kingdom.   They continually looked for a physical kingdom.

But let’s go back to that parable again.  The whole purpose of Jesus telling these little parables, is to help His listeners understand the nature of the kingdom of heaven.  These people had no idea of what that kingdom would be like.  All they knew was what the physical kingdom of Israel was like.   Here’s the part that people didn’t understand then, and that so many still don’t understand today..   “the kingdom of God is within you!”

Since the kingdom exists in your spirit, no one can see it.   You can’t see it coming, and you can’t see it when it’s there.  The only way you can know it’s there, is by the way it makes a person behave, when they’ve got the kingdom, in their spirit.

You can’t just look at a person, and be able to tell if the kingdom is within them.  You’ve got to wait until they DO something.  Then you can begin, to be able to tell.  Jesus said in  Mathew 7, verse 20;  “So then you will know them (or, you will recognize them)  by their fruits.”   So even though you can’t see the kingdom, you can see the “produce” of it.

Jesus says that the spiritual kingdom of heaven, may be compared, to a man who sowed good seed in his field.  But then, during the time that the men were sleeping, the enemy came.  It was customary for the owner of a field to have other men who did the sowing and the reaping for him.  So when these men were sleeping, the enemy came and sowed these “tares”, or weeds, in the midst of the good seed.  And then the enemy went away.  In other words, the enemy slipped in, while no one was paying attention, and he sowed the tares, and then he slipped out again without being noticed.

And it went on, un-noticed, until the wheat matured.  Verse 26  said;  “But when the wheat sprang up and bore grain, then the tares became evident also.”   I see that happening in my neighbors fields, every year when they plant.  They get the soil ready, and they sow the seed, and the seed sprouts, and everything looks perfect.  But then when the plants start to mature, that’s when you can see weeds coming up too.  And it’s not that an enemy came and sowed other seeds in my neighbor’s field, it’s just that he didn’t start with a perfectly pure seed to begin with.

But when the word is tampered with, and when it’s “changed”, even when it’s changed ever so slightly, and then you sow THAT word, that’s when you see the tares coming up.

Jesus had told this parable to a multitude of people.  He had just finished telling the parable of the sower, where the seed fell on the various kinds of surfaces.  Some of the seed fell beside the road, and never even got into any soil., and so the birds simply ate up the seed.  And then some fell on rocky soil, and it couldn’t get any good root to sustain itself, and so when it sprouted, the sun just burned it up.  And then some fell among the thorns, and was simply choked out by the those weeds.  And then finally, some of the seed, did indeed fall on good soil, and that seed obviously germinated, and it sprouted, and matured, and yielded a big crop.  Some a hundred fold, some sixty, and some thirty.   That’s  Mathew 13, verses 4 thru 9.

And then in  verses 18 thru 23,  Jesus explains the parable of the sower.  He says in  verse 19,  that the seed, is “the word of the kingdom”.    And he says in  verse 23;  “And the one on whom seed was sown on the good soil, this is the man who hears the word, and understands it;  who indeed bears fruit, and brings forth, some a hundred fold, some sixty, and some thirty.”

So then Jesus is explaining how the word of the kingdom is likened to a seed that you sow.  And He says that when a person hears the word of the kingdom, and understands it, he’s like “good soil”.  And then you begin to see the evidence of the fact that the word has taken root, in that good soil.  And the evidence is the abundance of fruit that gets produced.  That’s exactly how you know, that the kingdom exists within a person’s spirit.   You know it by their fruits.

Then Jesus tells the parable of the wheat and the tares.  And it says in  verses 38 thru 40;  “Then He left the multitudes, and went into the house.  And His disciples came to Him, saying;  Explain to us the parable of the tares in the field.  And He answered and said;  The one who sows the good seed, is the Son of Man.”  That’s Jesus, sowing the word of the kingdom.  That’s what Jesus had said in His explanation of the parable of the sower, that the seed, is “the word of the kingdom”.   And we also know that from  1 Peter 1, verse 23,  which says;  “For you have been born again, not of seed which is perishable, but imperishable, through the living and abiding word of God.”

And then Jesus continues..

As a matter of fact, it’s been established, that the “seed” is the word of God, “the word of the kingdom”.   And it’s also been established that “the one who sows the good seed, is the Son of Man”, that’s Jesus.   And we saw from 1 Peter, that we’re “born again” by this living and abiding “seed”.   So then, we can see that what Jesus is saying, is that “the sons of the kingdom”, are the “produce” of the good seed.

You know how the word “seed” is also sometimes used to mean “offspring”?   Like when the bible talks about the seed of Abraham;  It means the offspring of Abraham.  Well, that word is used in BOTH of these ways in these verses.   “The one who sows the good SEED, is the son of Man”..  “And the good OFFSPRING, these are the sons of the kingdom.”

Then Jesus says, in  verses 38 thru 40;  “And the tares, are the sons of evil, and the enemy who sowed them, is the devil, and the harvest is the end of the age, and the reapers are angels.  Therefore, just as the tares are gathered up and burned with fire, so shall it be at the end of the age.”   In other words, so shall it be, that the sons of evil, which are represented by the tares, shall also be gathered up and burned with fire.

Remember, Jesus is using this parable, to illustrate the nature of the kingdom of heaven.  And even though the kingdom of heaven is a spiritual kingdom, residing within man’s own spirit, this kingdom is allowed to exist and to grow, right alongside the tares of the world.

In  1 Corinthians 5, verses 9 & 10,  the apostle Paul said;  “I wrote you in my letter, not to associate with fornicators.  But not entirely, or in every way, with the fornicators, or with the covetous, and swindlers, and idolaters;  For then you would have to go out of the world.”

So it’s clearly God’s will, that His spiritual kingdom, should remain a part of this physical world.  And there’s good reason for that.  It’s just like Jesus said in  John 3, verse 17;  “For God did not send the Son into the world to judge the world, but that the world should be saved through Him.”

Well, that’s the very same reason that His kingdom should be in the world;  That the world should be saved through word of the kingdom, spread by the sons and daughters, of the kingdom.   The nation of Israel was plagued by such a “separatist” attitude.  They simply didn’t understand their original function;  That of keeping pure, and spreading, the word of God.

And that’s also our function in the world.  The purpose of the sons and daughters of the kingdom, is to keep the commandments of God, and to “go into all the world, and preach the gospel to every creature.”

Our focus has been on how the kingdom of God co-exists along with the people of the world.  And we read in  verse 40;  “Therefore, just as the tares are gathered up, and burned with fire, so shall it be at the end of the age.”   So in other words, all the people of the world will be gathered up, and figuratively speaking, shall be “burned with fire”.

But now listen to  verse 41;  “The Son of Man will send forth His angels, and they will gather OUT OF HIS KINGDOM, all stumbling blocks, and those who commit lawlessness, and will cast them into the furnace of fire.  In that place, there will be weeping and gnashing of teeth.  THEN the righteous will shine forth as the sun, in the kingdom of their Father.  He who has ears, let him hear.”

That’s a pretty loud warning.  “He who has ears, let him hear!”   We sometimes get the feeling that if we’re in the church, then we’re safe.  But it’s not quite so “automatic”.   It’s like it says in  1 Peter 4, verse 17;  “For it is time for judgment to begin with the household of God.  And if it begins with us first, what will be the outcome, for those who do not obey the gospel of God?”

When Jesus said that,  “the Son of Man will send forth His angels, and they will gather, out of His kingdom”;  the words “out of” mean..  “From the center, on out.”   There will be no escaping, the judgment of God.  Unless of course, we are SURE, that we will be found IN Christ, when he comes.

The only way to be “IN Christ”, is to be in a covenant relation with Him.   We’re told in  Hebrews 9:15,  that Jesus is the mediator of a “new covenant”.  To be in that covenant relation with Jesus Christ, we must “put on Christ”..  Galatians 3:27.   And that same verse tells us that in order to “put on Christ”, we must be “baptized INTO Christ”.   Romans 6:3  tells us again, that we are “baptized INTO Christ”.

Unless you’re IN Christ, you have no chance!  Please think seriously about these words.