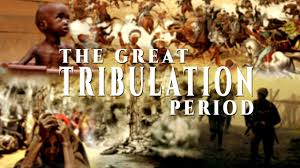 Tribulation and the Bible

Listen to what the apostle John wrote near the end of his life while he was exiled on the island of Patmos.  He wrote, in  Revelation 1:9;  “I, John, your brother and fellow partaker, in the tribulation, and kingdom, and perseverance in Jesus..”

There’s enough tribulation in the world even without being a Christian.  But when you try to live a Christian life, while you’re living in this world, well, your tribulation will be multiplied many times over.  The world doesn’t WANT you to be living as a Christian!

Jesus said to the congregation at Smyrna, in  Revelation 2:9;  “I know your tribulation..”  And in the next verse He said;  “You will have tribulation..”

He said to the congregation at Pergamum, in  verse 13;  “I know where you dwell, where Satan’s throne is..”  That implies tribulation!

Acts 14:22  says that the apostle Paul was;  “..strengthening the souls of the disciples, encouraging them to continue in the faith, and saying;  Through many tribulations we must enter the kingdom of God.”

You’re familiar with the parable of the sower, right?  Well, listen to  Mathew 13:20 & 21;  “And the one on whom the seed was sown on the rocky places, this is the man who hears the word, and immediately receives it with joy.  Yet, he has no root in himself, but is temporary.  And when tribulation or persecution arise because of the word, immediately he falls away.”

Tribulation WILL arise!  God has ordained that it will.  And it will cause some people to fall away.  There’s a war going on, and that’s why we’re told in  Ephesians 6:11;  “Put on the full armor of God.  For our STRUGGLE is not against flesh and blood, but against the rulers, against the powers, against the world forces of this darkness, against the spiritual forces of wickedness in the heavenly places.”

There are, and will always be, spiritual forces that are against Christianity as a whole, and against Christians individually.  The spirit of evil, which is called Satan, does not want you to be a Christian.  And everything in this world will be thrown against you, to either prevent you from being converted, or to cause you to fall away, once you are converted.

“The lust of the flesh, the lust of the eyes, and the boastful pride of life”, are your enemies!   (1 John 2:16).  You want to be popular and well-liked, don’t you?  Well, the world doesn’t LIKE faithful Christianity, it’s not popular.  The world likes lust!  And if you try to control your lusts, the world is going to fight you every step of the way.  Whether you know it or not, you are in tribulation, every day of your Christian life!  If we do NOT face tribulation, we might need to question our faithfulness.

“In the world you will have tribulation!”  “And indeed, all who desire to live godly in Christ Jesus, will be persecuted!”   That’s the way it is, and there’s no escaping it.

It says in  Acts 11, verse 1,  that at one time, Saul himself was “breathing threats and murders against the disciples of the Lord..”   Do you think that there aren’t people doing that very thing today, all over the world?   Talk to brethren in India, or in Africa.  Talk to them in Israel, and Egypt, and through out the middle east.  Talk to them in Russia and China.  Threats and murders, against Christians!  Tribulation!

We who live in the United States, are some of the most blessed people on this earth.  But there are people in the world who want to kill you, simply because you are a Christian!  And I hope and pray that our government would do something to keep those people out of our country.  But it doesn’t look like they will.  And so I hope and pray that our GOD, will do something to protect us individually.

But the fact remains, that “all those who desire to live godly in Christ Jesus, will be persecuted!”   “In this world you will have tribulation”, of some sort, and to some degree, as long as you remain faithful.

You and I live in a world of great tribulation!   “Great” tribulation, not just a little tribulation.  I’ve simply read to you a “handful” of verses that prove that to be a fact.  There’s literally dozens more verses in the new testament that also attest to that fact.

But let me get to the point.  What was the original question, that I began this lesson with?  The question was;  “Does The Bible Teach A Tribulation?”  Well, does it?  It absolutely does!  Over, and over, and over again it does.  Throughout the entire new testament it does.

And one of the verses that I started with was  Revelation 1, verse 9,  which says;  “I, John, your brother and fellow partaker in THE tribulation and kingdom, and perseverance in Jesus!”

Many people think that  Mathew 24:21,  is referring to a great tribulation that will occur after Christians are “raptured” from this earth.  But that’s definitely NOT what it refers to!  In the first place, the lesson we had two weeks ago on the subject of a rapture, showed us absolutely, and without a doubt, that when faithful Christians are taken off this earth, it will be on the LAST day, at the second coming of Christ.  The only tribulation that will follow that event, will be the tribulation that all unfaithful souls will experience eternally, in hell.

The tribulation spoken of in  Mathew chapter 24,  is the tribulation associated with what the bible calls, the “Abomination of Desolation”  (Verse 15)   It was predicted in  Daniel chapter 12,  and it took place between approximately, AD 66 and 70, and was culminated with the utter destruction of the Jewish temple in Jerusalem, of which Jesus said;  “..Not one stone here will be left upon another, which will not be torn down!”  (Mathew 24, verse 2)

Jesus said, in  verse 23,  that when this particular tribulation occurs;  “..If anyone says to you; Behold, here is the Christ, or, There He is, do not believe him!  For false Christs and false prophets will arise, and will show great signs and wonders, so as to mislead if possible, even the elect.”   In other words, Jesus is NOT coming, when this tribulation occurs.   Not right before, and not right after.

Jesus said in  verse 16;  “Then let those who are in Judea, flee to the mountains.”  This tribulation, is limited to the area of Judea, which of course includes Jerusalem and the temple.

So when John spoke of “THE tribulation”, he was referring to a specific tribulation, that Christians experience in the kingdom of God.

Here’s the only other verse in the bible, that speaks of  “The tribulation”, and it’s the same tribulation spoken of in  chapter 1, verse 9.  It’s also found in the book of  Revelation, in  chapter 7, verse 14.  Here’s what it says;  “These are the ones who come out of THE great tribulation..”   The original wording is;  “The tribulation, the great.”

But let me read from  verse 9,  and go through  verse 17,  so that you’ll get the whole context of what’s being said.   So, beginning with  verse 9;  “After these things, I looked and behold, a great multitude, which no one could count, from EVERY nation, and tribes, and peoples and tongues.  Standing before the throne, and before the Lamb, clothed in white robes.  And palm branches were in their hands, and they cry out with a loud voice saying;  Salvation to our God who sits on the throne, and to the Lamb.”

“And all the angels were standing around the throne, and around the elders and the four living creatures.  And they fell on their faces before the throne, and worshipped God saying;  Amen, blessing and glory and wisdom and thanksgiving and honor and power and might, be to our God, forever and ever, Amen!”

“And one of the elders answered saying to me;  These who are clothed in the white robes, who are they, and from where have they come?  And I said to him;  My Lord, you know.  And he said to me;  These are the ones who come out of THE great tribulation, and they have washed their robes, and made them white in the blood of the Lamb.”

“For this reason, they are before the throne of God, and they serve Him day and night in His temple.  And He who sits on the throne shall spread His tabernacle over them.  They shall hunger no more, neither thirst anymore.  Neither shall the sun beat down on them, nor any heat.  For the Lamb in the center of the throne shall be their shepherd, and He shall guide them to springs of the water of life, and God shall wipe every tear from their eye.”

That’s a beautiful description of heaven isn’t it?  And all of those souls in heaven have come out of THE great tribulation, that we ALL face as Christians.  The tribulation IS our life as a FAITHFUL Christian.  “ALL those who desire to live a godly life in Christ, will have tribulation!”

“In the world, you have tribulation, but take courage, I have overcome the world.”  The apostle John said that he was our “brother, and fellow partaker in the tribulation, and kingdom and perseverance in Christ.”   But he overcame that tribulation, and so can we.  We can be among those “who come out of the great tribulation”, with our robes “washed in the blood of the Lamb”.

The tribulation in the book of Revelation is NOT the tribulation that occurred when the temple in Jerusalem was destroyed.  That tribulation was suffered by the Jews who did NOT believe in Christ.  Remember the warning that Jesus gave;  “Then, let those who are in Judea, flee to the mountains!”  (Mat 24:16).  And those that did believe in Christ, DID flee.

Those who have come out of the great tribulation, spoken of in  Revelation 7:14,  are those who have lived a faithful life IN Christ!

Think about how great the tribulation has been for Christians, throughout the history of the church.  Beginning with the stoning of Stephen, in  Acts chapter 7,  Christians have been giving their lives for Christ, just like He gave His life for us.  And the tribulation continues every day, even today.  I would imagine that today, somewhere in the world, someone will give their life for Christ.  Would YOU give your life, if you were faced with that decision?

“In the world you will have tribulation, but be of good courage”,  because Jesus has overcome the world, and so can we, simply by obeying God, and remaining faithful.  Then we will have come OUT of the great tribulation with our robes washed in the blood of the Lamb, and live with God eternally.

May God bless you in your struggle.