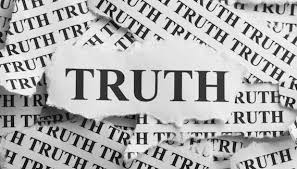 I want to talk today about interpreting the bible.

For example;  Jesus said, in  John 14:6;  “I am the way, the truth, and the life.  No man comes to the Father but by Me.”  That’s a pretty straightforward statement, and we believe that it’s true because the bible says so.  That verse constitutes an absolute truth.  It is absolutely true, that Jesus is the only way to the Father.  And if we were to interpret another verse in such a way as to contradict that truth, then our interpretation of that other verse would obviously be incorrect.  Do you agree?

Can you come to the Father, through Mary, the mother of Jesus?  Catholics say you can, so can you?  No you can’t!  Why not?  Because of the absolute truth of  John 14, verse 6,  that’s why.

So then I couldn’t CORRECTLY, go to another verse, and interpret it in such a way, as to contradict the fact that no one comes to the Father, but by Jesus;  Is that right?

Let me read to you,  Mathew 16, verse 19.  Here’s what Jesus said to Peter;  “I will give you the keys of the kingdom of heaven, and whatever you shall bind on earth, will be bound in heaven, and whatever you shall loose on earth, will be loosed in heaven.”   Now, without spending time actually interpreting that verse, it might SOUND to someone, like Jesus just gave the apostle Peter an awful lot of authority there.   What if I were to interpret that verse to mean that Peter has the authority to ordain, who you can, and who you can not, come to the Father through?   Could I correctly interpret the verse that way?  No I can’t.

There’s two reasons why I can NOT interpret that verse in that way.  First of all, that verse doesn’t SAY that I can come to God through Peter or anyone else.  And the second reason why I can’t interpret it that way, is because  John 14:6  says that I can’t.  No matter what is or isn’t true about the meaning of  Mathew 16:19,  it can not override, or make of no effect, the truth stated in  John 14:6,  that “no man comes to the Father, but by ME”.  By Jesus!

That’s how every single verse in the bible must be interpreted, as absolute truth!  But you can’t read into it, things that it doesn’t say.  Each verse says exactly what it says, and no more and no less, and everything that each verse says, is absolutely true.  And no verse will ever change the truthfulness or factualness, of another verse.

I’d like to get 100% unity on a few more verses of scripture.  The first verse is  1 Corinthians 15, verse 50.  It’s a clear, and simple, and straightforward statement of a truth.  Here it is;  “Now I say this brethren, that flesh and blood cannot inherit the kingdom of God, nor does the perishable inherit the imperishable.”

Does everyone believe that that verse is 100% true?  Do you also believe that no matter what another verse of scripture says, this verse will always be true?

Now, let’s look at another verse.  Luke 24, verse 39;  “See My hands and My feet, that it is I Myself.  Touch Me and see.  For a spirit does not have flesh and bones as you see that I have.”   This verse is saying that at this specific time, the Spirit of Jesus was united with His physical body.   John 20, verse 27,  says the same thing.  Listen;  “Reach here your finger, and see My hands.  And reach here your hand, and put it into My side, and be not unbelieving, but believing.”

So we all agree that on this occasion, Jesus appeared to His disciples in His physical body, right?   Good. Now, listen to  Mark 16, verse 12;  “And after that, He appeared in a DIFFERENT FORM, to two of them, while they were walking along their way to the country.”  Luke also records this incident, in  Luke 24,  beginning with verse 13.    Do you believe this verse, that Jesus appeared to two of His disciples, in a “different form”?  If Jesus appeared in a “different form” then He did NOT appear at this time, in His original physical body, because that would have been in the SAME form.

So then you all believe, that after Jesus’ resurrection, He sometimes appeared in His physical body, but that He, at least on this one occasion, was able to put off that physical body, and appear in a “different form”.  We don’t know what that form was, but we know it was “different” from His original body.  Is that true, that you believe what the bible says there?

Now, do you still believe that flesh and blood CANNOT inherit the kingdom of God?  That truth hasn’t changed any has it?

Here’s the first fact that we’re going to base our conclusion on;  It is a fact, that Jesus could “put on”, and “take off”, and “put on” again, His physical body.  Correct, or not correct?

Here’s the next fact that we’re going to base our conclusion on;  It is a fact, that a flesh and blood body CANNOT inherit heaven.  It CANNOT enter into heaven.   Correct, or not correct?

Ok, now here’s our conclusion;  When Jesus finally ascended into heaven, it was required, that He once again “put off” His physical body, before He entered heaven.   Correct, or not correct?

Now, let’s go to two more verses that we talked about last week.   Mathew 27, verses 52 & 53,  Listen please;  “And the tombs were opened, and many of the BODIES, of the saints who had fallen asleep, were raised;  And coming OUT of the tombs, after His resurrection, they entered the holy city, and appeared to many.”

Do you believe, that those verses are true?   Good, so do I.

But let me make two comments about these verses.  First;  These are the only verses in the bible that say anything about this happening, therefore, this is all the information that we’ve got about it.

Second;  The bible says very clearly, that it was the BODIES, of saints who had died, that were raised.  It says nothing at all about a resurrection of the spirits of those who had died.  Could the spirits of the deceased have been reunited with those bodies?  I suppose it’s possible, but the bible doesn’t say that they were.   We do know from  James 2:26,  that “the body without the spirit is dead”.   But I suppose that God could have made those bodies rise up again with or without the spirit.  It would have been up to God.  But we’re just focusing on the body here anyway.

But we can easily know what DIDN’T happen to those bodies.  Knowing what we know about  1 Corinthians 15, verse 50,  that  “Flesh and blood CANNOT inherit the kingdom of God, nor does the perishable inherit the imperishable”,   we KNOW, without a doubt, that those bodies did NOT go to heaven, because that would have been impossible!   And that truth will never change.

To hold a belief that contradicts that fact, is to say;  I do NOT believe the bible!   And we do not want to be in the position of taking a stand against, what the bible declares to be a fact.

Let’s look at some more bible “facts”.   These facts are absolutely true, and will never change.

We don’t know any more about our future bodies, than theses verses have told us.  That’s exactly why the apostle John wrote in  1 John 3:2;  “Beloved, now we are children of God, and it has not appeared as yet, what we shall be like.  We know that when He appears, we shall be like Him, because we shall see Him just as He is.”

Just for the sake of review, here’s what we do know for a fact;

That’s what God has told us about our resurrection body.  If we disagree with that, then we are rejecting the word of God, and that means that we’re rejecting God Himself.

Thanks for studying the bible with me today.  If you have any comments or questions, please leave them in the space provided below.  May God bless you.