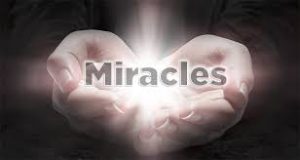 What Qualifies as a Miracle?

To help us understand whether or not miracles occur today, we’re going to look at when miracles have occurred in the past, and WHY have they occurred.

The very first time that the bible records that miracles occurred, was during the creation of the heavens and the earth. For six consecutive days, God performed miracles, as He, through Christ, created all of the physical creation.  But why did God create the heavens and the earth?  Well, since no one else existed at the time, God must have created all things for His own good pleasure.

Genesis 1:31  says;  “And God saw all that He had made, and behold, it was very good..”  It pleased God to create what He had made.   God’s own pleasure, must have been the purpose for all of creation.

Here’s something that we might consider a miracle.  It was when God drove Adam and Eve from the garden of Eden.  Listen to  Genesis 3, verse 24;  “So he drove the man out, and at the east of the garden of Eden, He stationed the cherubim, and the flaming sword, which turned every direction, to guard the way to the tree of life.”   Now that doesn’t sound like a natural occurrence, governed solely by the laws of nature.   But rather, it sounds like a miracle performed by God.  And why did God perform this miracle?  He did it, because of His dis-pleasure with what Adam and Eve had done.

The bible doesn’t record another miracle occurring for 987 more years.  Miracles weren’t an everyday occurrence where they?  In approximately 3107 BC, a man named Enoch, was miraculously taken from this earth, by God.  It says in  Genesis 5:24;  “And Enoch walked with God, and he was not, for God took him.”   Why did God miraculously take Enoch?   It says in  Genesis 5:22;  “Then Enoch walked with God three hundred years after he became the father of Methuselah..”

So then God took Enoch, because Enoch pleased God.  Enoch must have agreed with everything that God said.  God said in  Amos 3:3;  “Can two walk together, unless they be agreed?”  That’s how you please God, by agreeing with everything that he says.  Not very many people do that these days though.  We’re lucky if we can get people to agree with anything the bible says, let alone everything!

The next time a miracle is recorded for us in the bible is in Genesis chapter 7.  And the occasion was when Noah and his family entered into the ark, and God closed the door behind them.  Verse 16.  Verse 11 says;  “In the six hundredth year of Noah’s life, in the second month, on the seventeenth day of the month, on the same day, all the fountains of the great deep burst open, and the floodgates of the sky were opened.”

All this occurred, in approximately 2438 BC, about 669 years after the miracle concerning Enoch occurred.  Again, miracles weren’t an everyday occurrence.   And why did God manipulate the laws of nature, and completely flood the earth, destroying every living creature, except for those who were in the ark?  It wasn’t for God’s pleasure.  But it was because of His DIS-pleasure!

Genesis 6:5 & 6  say;  “Then the Lord saw that the wickedness of man was great on the earth, and that every intent of the thoughts of his heart was only evil continually.  And it repented the Lord that He had made man on the earth, and He was grieved in His heart.”

The next miracle to be recorded in the bible, is in  Genesis chapter 11,  and it concerns the tower of Babel.  We’re not given enough information in the bible to estimate what approximate year this occurred, but it sounds like it was after Noah had died.  It says in  Genesis 9, verse 28;  “And Noah lived three hundred and fifty years after the flood.”   And so we can pretty safely assume that it had been at least three hundred and fifty years since the last miracle occurred.

Remember, this miracle concerns the tower of Babel, and here’s what it says in  Genesis 11:5 thru 9;  “And the Lord came down to see the city and the tower which the sons of men had built.  And the Lord said;  Behold, they are one people, and they all have the same language, and this is what they began to do, and now nothing which they purpose to do will be impossible for them.”

Why did God perform this miracle of scattering the people over the face of the earth, and of confusing their language?  Obviously, God was not pleased with what they were doing, and so He stopped them.  But why wasn’t God pleased?   I believe it was because of the intentions of the people.  It says in  verse 4;  “And they said to one another;  Come let us build for ourselves a city, and a tower whose top will reach to heaven.  And let us make for us a name, lest we be scattered abroad over the face of the whole earth.”

To put it very simply, the people were acting out of pride, weren’t they?  And God doesn’t like pride.  It displeases God.  And so what did God do?  He humbled the people.  He did to them exactly what they didn’t want to happen.  He scattered them over the whole face of the earth.   Mathew 23:12  says;  “And whoever exalts himself, shall be humbled..”   So then, here’s the second miracle that occurred because of God’s displeasure over man’s behavior.

Over a period of a little over 2,000 years, we have five occasions where miracles occurred. Two were for the pleasure of the Lord, and three were because of His displeasure.

Now the bible takes us into what we might call a new period of time.  Genesis chapter 12  introduces us to a man named Abram.  And we’re going to be told about some miracles concerning Abram, and some others people as well.  But we’re going to notice something different about the purpose for the miracles that are going to take place.  I think it would be pretty fair to say, that the miracles that will occur from this point on, will ALL, have ONE underlying purpose behind WHY they occur.

There may be a couple of exceptions along the way, but the one purpose that is going to be common for almost all miracles from now on, is;  The establishment, and the building up of the kingdom of God.  From Abraham on, everything that God causes to happen, is focused on man’s salvation through Christ.  And the miracles that are recorded, are for that one purpose.  Even though there may be  couple of exceptions along the way.

I suppose that you could say that even the miracles that we’ve already considered, have been for that one purpose.  Because all the miracles thus far, have really just “set the stage” for what’s coming next.  The creation of the physical worlds, and of man himself, has simply set the stage for the salvation of man.

The taking of Enoch, was for one man’s salvation, while the preserving of Noah and his family, was for the salvation of eight souls.  But on the other hand, the great flood was for the purpose of judgment, upon the rest of mankind.

So God speaks to Abram, which in itself wasn’t a miracle, because that’s how God used to do things.   Hebrews 11, verse 1  tells us that God;  “Spoke long ago to the fathers, and in the prophets, in many portions, and in many ways.”

So God speaks to Abram, and he tells Abram to leave the country of his birth, and to journey to a land that God was going to show him, and Abram obeys.  And in  Genesis 15, verse 5,  it says;  “And He took him outside (God took Abram outside) and said;  Now look toward the heavens, and count the stars, if you are able to count them.  And He said to him;  So shall your descendants be.”   And verse 6  says;  “Then he believed in the Lord, and He reckoned it to him as righteousness.”

And  verses 10 & 11  say;  “Then he brought all these to Him (to God) and cut them in the midst, and laid each half opposite the other, but he did not cut the birds.  And the birds of prey came down upon the carcasses, and Abram drove them away.”

Now listen to what happened in  verses 11 thru 16;

“Now when the sun was going down, a deep sleep fell upon Abram, and behold, a terror of great darkness  fell upon him.  And God said to Abram;  Know for certain, that your descendants will be strangers in a land that is not theirs, where they will be oppressed four hundred years.  But I will judge the nation whom they will serve, and afterward, they will come out with many possessions.  And as for you, you shall go to your fathers in peace.  You shall be buried at a good old age.  Then, in the fourth generation, they shall return here, for the iniquity of the Amorite is not yet complete.”

Now here comes the miracle;  Verse 17;  “And it came about when the sun had set, that it was dark, and behold, a smoking oven, and a flaming torch, which passed between these pieces.”  When the Lord came down and passed between the halves of the sacrificed animals, He was accepting Abram’s sacrifice, and He was making a covenant with Abram.

The land occupied by all those nations, was given by God, to the descendants of Abram, by a covenant promise.  And the miracle that God performed that night, was the sign, and ratification of that covenant.

And that miraculous sign,  was a sign of salvation for the descendants of Abram.  It was the first, of what would be a long line of miracles with the underlying purpose of bringing salvation to mankind.   And along the way, there’s going to be some miracles performed, pronouncing, and enacting judgment upon certain people, as well as salvation for others.

And Lord willing, we will continue next week.