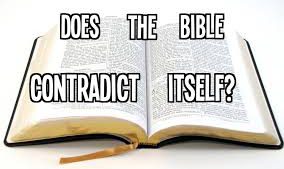 There’s a lot of different reasons that people will give for not believing in the bible.  One of those reasons is the fact that the original writings of the scriptures don’t exist.  All we have to go by, are copies of copies of copies, of the original writings.   Therefore, lots of people don’t trust the reliability of these copies of the copies.  And since man has proved over and over again that he can’t be trusted very well, to not tamper with things, people simply don’t believe that the bible that we have today, is actually the accurate words from God.

People make claims that the bible has been changed hundreds, if not thousands of times, and therefore it’s no longer God’s word, if indeed it ever was.  People think the bible is full of contradictions, and that it’s full of inaccuracies, which prove that it’s not God’s word, because God wouldn’t make so many mistakes.

I was reading several articles, basically written by atheists, about so called “bible discrepancies”, and I noticed right away, that most of the “discrepancies” were simply the result of not understanding what the bible is saying.  A lot of the time, the writer reads things into the scriptures that God really hasn’t said.  Of course, even the majority of so called “Christians” read things into the bible that it really doesn’t say.  So much is “assumed”, when the assumption is really unwarranted.

And so people assume that there are contradictions and mistakes in the bible, when all it boils down to is the fact that they don’t know the bible well enough to understand it.

Let me give you an example of what has been published as a “geographical mistake” in the bible.  You remember when Lot was taken prisoner by a band of marauding kings and their men.  And they were heading back north from where they had come down from, and Abram went after them to rescue Lot.  It says in  Genesis 14:14;  “And when Abram heard that his relative had been taken captive, he led out his trained men, born in his house, three hundred and eighteen, and went in pursuit as far as Dan.”

Now the critics and the unbelievers say;  There’s a blatant error right there.  The land called “Dan” didn’t exist in the days of Abram.  The territory of Dan, was a territory given to the tribe of Dan, one of the sons of Israel, when Israel took over the land of Canaan.   So the bible has made a geographical error, in saying that they went as far as Dan.

Now it’s a fact, that at the time when Abram pursued the army that took Lot captive, that territory of land to the north of the Sea of Galilee, wasn’t called “Dan”.  It was called “Bashan” according to an ancient map of the area that I looked at.  Even the city of Dan, in the northern part of that land, wasn’t called Dan, back then, but it was probably the ancient city of “Laish”, or “Laisha”, which is the name referred to in  Judges 18:7,  and in  Isaiah 10:30.

So, does the bible make a mistake there?  It’s commonly thought that Moses was the writer of Genesis.  But critics say that the area wasn’t given to the sons of Dan, until well after Moses had died, so we’ve found a mistake here.  How do the critics know what God had revealed to Moses about the future?  Or maybe Moses didn’t write the book of Genesis.  It doesn’t matter to me whether he wrote it or not though.  Couldn’t God have inspired someone to refer to that territory as “Dan”, even if it hadn’t officially been given that name yet?

God could have inspired Moses, or some one else for that matter, to use the name “Dan”, even if they knew nothing about the land that was going to be called “Dan”.  Did prophets of God ever speak of things that they didn’t know the details about?  Do you remember what it says in  1 Peter 1:10 thru 12?

“As to this salvation, the prophets who prophesied of the grace that would come to you, made careful search and inquiry, seeking to know what person or time the Spirit of Christ within them was indicating, as He predicted the sufferings of Christ and the glories to follow.  It was revealed to them, that they were not serving themselves, but you, in these things which now have been announced to you through those who preached the gospel to you by the Holy Spirit sent from heaven – things into which angels long to look.”

The point is that even the prophets themselves didn’t always know the details concerning what they were prophesying about.  And if Moses did write the book of Genesis, he might not have known all of the history, or the future, of the territories that he spoke of.

But I think we can see how a lack of knowledge and a lack of understanding of the scriptures, leads to a definite lack of faith.  And sometimes it can even lead to atheism.

Here’s an example of a lack of understanding, of a verse of scripture.  This may sound rather silly, but I just read about someone complaining about this so called “bible contradiction”.  It says in  John 12:14;  “And Jesus, finding a donkey, sat on it;  As it is written;  Fear not, daughter of Zion;  Behold your king is coming seated on a donkey’s colt.”

But  Luke 19:30  records these words of Jesus;  “Go into the village opposite you, in which as you enter, you will find a colt tied, on which no one yet has ever sat.  Untie it and bring it here.”

Luke says the disciples found the colt, but John says that Jesus found the colt.  Is that a contradiction?  It’s rather silly to even question it.  Jesus knew where the colt was, He didn’t have to “find it”.  The disciples “found” the colt, exactly where Jesus had told them it would be.  But here’s something else concerning this occasion.

Well, in reality, there is no contradiction.  What there is, is a slightly poor translation of one of the words, and there’s a simple lack of understanding of what the verse in Mathew is saying.   The word that’s translated poorly, is the simple word “and”.   “They brought the donkey AND the colt.”  The word used there can indeed mean “and”.  But that’s not what it means in this verse.  That word is used over 9000 times in the new testament, and here’s some of the ways it’s used.  It’s used to mean, “and”, and it used to mean “also”, and “even”, and “moreover”, and “indeed”, and “namely”.  Those are some of the more common usages.

So here’s the proper rendering of the verse;  “They brought the donkey, NAMELY, the colt, and they laid on HIM the garments, and He sat on HIM.”   They disciples didn’t bring the donkey AND the colt, but they brought the young donkey, namely, the colt.

People will certainly go to great lengths to try to disprove the bible.  I read a list of probably a hundred so called “contradictions”, and most of them were just a silly as this one.

Do you remember the woman named Jael who drove a tent peg through the skull of a Canaanite named Sisera?  It says in  Judges 4:21;  “But Jael, Heber’s wife, took a tent peg, and seized a hammer in her hand, and went secretly to him and drove the peg into his temple, and it went through into the ground, for he was sound asleep and exhausted, so he died.”

And the scripture says that Deborah and Barak sang a song on that day, because the Canaanites had been slain.  And the words that they sang are given in  chapter 5, verse 2 thru 31.  And  verses 26 & 27  give us these words from the song;  “She reached out her hand for the tent peg, and her right hand for the hammer.  Then she struck Sisera, she smashed his head, and she shattered and pierced his temple.  Between her feet he bowed, he fell, he lay.  Between her feet he bowed, he fell;  Where he bowed, there he fell devastated.”

Chapter 5  is a song!  It’s not a literal description of what happened.  He fell devastated at her feet.  It’s an expression used in a song!  What’s wrong with people?

Now we come to  chapter 2,  where it says, beginning with  verse 4;  “This is the account of the heavens and the earth, when they were created, in the day that the Lord made the earth and heaven.  Now no shrub of the field was yet on the earth, and no plant of the field had yet sprouted, for the Lord had not sent rain upon the earth, and there was no man to cultivate the ground.  But a mist (or a flow) used to rise from the earth and water the whole surface of the ground.”   Sounds like natural springs would flow, doesn’t it?

Now here’s the part that troubles people, beginning with  verse 7;  “Then the Lord formed man of the dust from the ground, and breathed into his nostrils the breath of life, and man became a living being.  (or a living soul, some versions say)  And the Lord planted a garden toward the east, in Eden.  And there He placed the man whom He had formed.  And out of the ground, the Lord caused to grow, every tree that is pleasing to the sight and good for food;  The tree of life also in the midst of the garden, and the tree of the knowledge of good and evil.”

Really, just a simple lack of understanding of the scriptures, is what causes all the problems that people seem to have.  And it’s really just a bunch of excuses, not to follow what the bible tells us.  It’s an excuse to do things our way, instead of God’s way.

One of the fellas who had complaints about all these contradictions, has a website called “The Thinking Atheist”.   I could debate how much thinking actually goes on there.  But I did run across some slightly more “credible” complaints, that do require a little more thinking, in order to get past what may seem on the surface, to be a legitimate contradiction.  But even those can be explained without being any kind of genius.  Just a working knowledge of the bible, and a little common sense is usually all it takes.

Next week I’d like us to consider a couple more “contradictions” though.