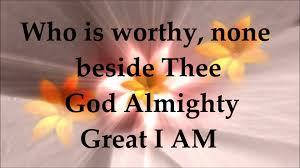 When’s the last time, that you’ve taken some time, to think about, and to appreciate, all that God is, and exactly what makes God, who He is?  That’s what I want us to do today;  Think about all the things that God is.  There’s a song called  “Our God He is alive”.   The chorus says;  “There is a God, He is alive.  In Him we live, and we survive.  From dust, our God created man.  He is our God, the great I Am.”

The bible tells us that God is, the great I Am.  When God sent Moses to Pharaoh, to demand the release of the sons of Israel, Moses said to the Lord, in  Exodus 3, verse 13;  “Behold, I am going to the sons of Israel, and I shall say to them;  The God of our fathers has sent me to you.  Now, they may say to me;  What is His name?  What shall I say to them?”

God says in  verse 12;  “It is I who made the earth and created man upon it.  I stretched out the heaven with My hands, and I ordained all their host.”   Going back to  verse 7,  God is, “The one forming light, and creating darkness. Causing well-being, and creating calamity. I am the Lord who does all these.”

How would you describe God to someone?  What would you tell someone, about what God is like?  There’s lots of scripture verses that you could use to describe God.  To begin with you might say that God never changes.  He’s always the same.  That’s what  Malachi 3:6  says;  “I the Lord do not change.”

Who is God?  God is the one who came to this earth, and took on a human body, and suffered and bled and died for you and me.  That’s who God is.   “For God so loved the world..”  that He came to this world and died for us.  And He continues to do for us every day.

How would you describe God?  You could tell someone how loyal the Lord is.   Deuteronomy 31:6  says;  “..For the Lord is the one who goes with you.  He will never leave you nor forsake you.”

Mathew 5:45  says;  “For He causes His sun to rise on the evil and on the good, and sends rain on the righteous and the unrighteous.”

There are things which God hates.  God hates haughty eyes and a lying tongue, hands that shed innocent blood, a heart that devises wicked plans, feet that run swiftly to evil, a false witness who utters lies, and one who spreads strife among the brethren,  Proverbs 6:17 thru 19.

And there are things which God loves.  God loves righteousness and justice,  Psalm 33:5.  God loves a cheerful giver,  2 Cor 9:7.   God loves sinners.  He commended His love toward us, while we were yet sinners,  Romans 5:8.   The Lord takes pleasure, in those who fear Him, in those who hope in His steadfast love,  Psalm 147:11.

There are things the Lord gives, and there are things He does not give.  God is opposed to the proud, but gives grace to the humble,  James 4:6.    The Lord giveth, and the Lord taketh away,  Job 1:21.   It says in  Ephesians 4, verse 8;  “When He ascended on high, He led captivity captive, and He gave gifts to men.”

And He gave gifts to men.  You could say that one of those gifts is salvation itself.  But the Spirit of Christ also gave gifts to the people in His kingdom.  He gave miraculous gifts that were needed to build up His body, the church.

What else could we say about our God?   In  Job chapter 38,  God Himself names several things that He has done.  Let me name some of them.  God laid the foundation of the earth.  He set it’s measurements, and sunk it’s bases.  God has made the morning stars sing together.  He has enclosed the sea, and set boundaries on it, saying;  “Thus far you shall come, and no farther, and here your proud waves shall stop.”  God commands the morning, and causes the dawn to know it’s place.  God has created the springs of the sea, and the recesses of the deep.  He has set the gates of death, and of deep darkness.  God has established the dwelling of light, and set darkness in it’s place.  He has numbered your days!

He has created the storehouses of the snow and the hail, and He has scattered the wind on the earth.  God brings the rain and the floods, and the deserts and the wasteland.  He makes the seeds to sprout, and He brings the dew, and the frost, and the ice, “when the waters become hard like stone, and the deep is imprisoned”.  He sets the stars and the constellations in their place, and he forms the clouds, and the lightening.  And He has set the life cycles of all the animals, and has provided their food, and their shelter.

And God says in  Isaiah 45:9 & 10;  “Woe to the one who quarrels with his Maker.  An earthenware vessel, among the vessels of the earth.  (That’s what we are, vessels made out of the earth)  “Will the clay say to the potter;  What are you doing?  Or what are you making?  Woe to him who says to a father;  What are you begetting, or to a mother;  To what are you giving birth.”

God is the Potter, and we are the clay.  And we need to allow ourselves to be molded into exactly what God wants us to be.  We don’t question what the Lord is molding us into.  We don’t question what comes our way.  We give thanks for the good things that God gives us, and we use those things to accomplish His will.  And we accept the things that don’t seem to be very good, sometimes they seem to be bad;  But we accept them, because it’s all part of God molding us to be what he wants us to be.  Remember Job’s words from  Job 2, verse 10?  “Shall we indeed accept good from God, and not accept adversity?”  So then we accept the good and the bad, and we endure what we must endure, and we simply keep on following His ways, and following His words, and trusting, that the outcome will be what’s best.  We’re not all going to be identical.   We’re not all going to be blessed with the same things, and we’re not all going to have to endure the same things.  But if we follow God’s instructions in the bible, and if we use the abilities that he has molded into us, and if we allow our experiences to continue to mold us, without using our bad experiences as an excuse to stop following God, then we WILL become exactly what God wants us to be.

As I close here, I’d like you to consider the idea of the word “comprehend”.   That word has about 4 slightly different meanings.  But the primary meaning, is “to take hold of something, as to make it your own”.   You might think of comprehending something, as understanding it.  And that’s right in some cases.  But the primary meaning in this verse, is to seize the Light, and to possess it, and to make it your own.  That’s what the darkness failed to do.

The Light of course is God, and the darkness is the world.  But more specifically, the darkness refers to the minds and the hearts and the spirits, of the people of the world, who don’t possess God in their lives.  God came into a world of souls in darkness, but for the most part, those souls didn’t take hold of God, and didn’t take hold of Jesus Christ, and make Him their own.   They didn’t want to possess the very Spirit that created them.  And the Spirit that sustains them.

How about you?  Do you comprehend the Light of the Life of men?  Have you seized and taken hold of God?  There’s only one way to do it, and that way is through Christ.  Jesus is  “The way, The truth and the Life”.  (John 14:6)  If you would take hold of God, you’ll do it by believing that Jesus was God in the flesh.  Not that he was simply a prophet, or a good man, but that He was God.

I’m not afraid to say that there’s a religious group called the Jehovah’s Witnesses, who aren’t “witnesses” of God at all.  They may think that they’re witnesses to God’s word, but they’re not even that, because they claim that Jesus was simply created by God, and that He was NOT God!   The bible says;  “In the beginning was the Word!”  The Word wasn’t created, the Word is eternal.  “The Word was God”, and the Word IS God!”  “And the Word became flesh, and dwelt among us!”

The only way that you can take hold of God, is to know that no one comes to God the Father, except by God the Son.  (John 14:6)

And you must confess that truth, and you must repent of your sins, and you must be baptized for the very purpose of having those sins washed away, so that God Himself can set you apart from the world, and so that He can add you to His body of the saved.  That’s how you “comprehend” God.  That’s how you seize Him, and take hold of Him, and make Him your own, and possess Him in your soul.  And that’s how you receive the promise from God, of eternal life for your soul, when you are resurrected on the last day.

But of course you must also remain faithful until death.  A person CAN fall away, even after having been forgiven, and having been added to the only church that belongs to Christ.  You can still fall away from salvation, as the result of not remaining faithful.