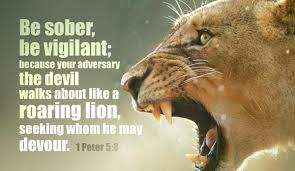 What is the Root of all Evil?

I heard someone suggest that it’s not the devil that we should fear the most, but rather, it’s the love of money.   You might ask;  How did someone even come up with that idea?  Well, they came up with it from reading  1 Timothy 6, verse 10.  The King James reads like this;  “For the love of money is the root of all evil.  Which while some coveted after, they have erred from the faith, and pierced themselves through with many sorrows.”

What about the verse from  1 Peter 5:8  that says;  “Be of sober spirit, be alert!  your adversary the devil prowls about as a roaring lion seeking whom he may devour.”  Sounds like maybe we ought to be afraid of that.  Maybe we shouldn’t be afraid, but the Lord says we need to be sober and alert.  We at least need to be careful.  The bible says, in  James 4:7;  “Resist the devil, and he will flee from you.”   But what if you don’t resist?  That’s when you better start being afraid.

What’s the “father” of the spirit of disobedience?  It’s the devil, it’s satan.  You know, people can believe in Jesus, but still not understand all that there is to understand about the Spirit of God, and the spirit of satan.  And when we tell them about all this, they stumble at the words, and at the ideas that the bible puts forth.  For example, let me read a passage from  John 8, verses 28 thru 59;

“Jesus therefore said; When you lift up the Son of Man, then you will know that I am He, and I do nothing on My own initiative, but I speak these things as the Father taught Me.  And He who sent Me is with Me.  He has not left Me alone, for I always do the things that are pleasing to Him.   Jesus wasn’t giving anyone just an opinion was He?  He was simply telling them the truth from God.   And when we do that, when we simply tell someone the truth, directly from the bible, they say; Oh, that’s just your opinion.  But it isn’t an opinion is it?

I just recently had a discussion with someone who believes in baptism, at least he says he does, but he said;  I won’t tell someone that baptism is “essential” to salvation, because the bible doesn’t use the word “essential”.  So he thought that saying baptism was “essential” was just giving your opinion.   What a mixed up world we live in!

But let’s get back to  John 8, and pick up in  verse 30;  “As He spoke these things, many came to believe in Him.  Jesus therefore was saying to those Jews who had believed Him;  “If you abide in My word, you are truly disciples of Mine, and you shall know the truth, and the truth shall make you free.  They answered Him; We are Abraham’s offspring, and have never yet been enslaved to anyone.  How is it that You say;  You shall become free?”

So, “Jesus answered them;  Truly, truly, I say to you, everyone who commits sin, is a slave to sin.”  So they were enslaved, they just didn’t know it.  “And the slave does not remain in the house forever;  The Son does remain forever.  If therefore the Son shall make you free, you shall be free indeed.”  Jesus is saying;  you are a slave, and you will remain a slave until I set you free.  The Jews used to be the “House of God”.  But if they remained slaves to sin, they weren’t going to remain in God’s house were they?  How could they remain in God’s house?  Jesus would have to set them free, otherwise, if they remained slaevs to sin, they couldn’t remain in God’s house.

So Jesus said, beginning in  verse 37;  “I know that you are Abraham’s offspring, yet you seek to kill Me, because My word has no place in you.”   Jesus wasn’t talking to them as if they were believers was He?  He was still lumping them together with the rest of the Jews who wanted to Kill Him.  So Jesus says to them;  “I speak the things which I have seen with My Father;  Therefore you also, do the things which you heard from your father.”  They didn’t know what He was talking about.  So  verse 39  says;  “They answered and said to Him; Abraham is our father.  Jesus said to them;  If you are Abraham’s children, do the deeds of Abraham.”

“But as it is, you are seeking to kill Me, a man who has told you the truth, which I heard from God;  this Abraham did not do.  You are doing the deeds of your father.”  Jesus was inferring that they had another father, besides Abraham.  “They said to Him; We are not born of fornication, we have one father, even God!”   They’re getting all tripped up here.  First they insisted that Abraham was their father.  Now they say God is their Father.   People do that today; They don’t believe the word says, and so they make up their own meaning for it, and they get all tripped up trying to make things fit together.  But if you don’t simply believe what the bible says, if you keep trying to make your own ideas fit in with what God says, you get things all mixed up.

In  verse 42;  “Jesus said to them;  If God were your Father, you would love Me, for I proceeded forth, and have come from God.  For I have not come on My own initiative, but He sent Me.  Why do you not understand what I am saying?  It is because you cannot hear My word.  You are of your father the devil, and you want to do the desires of your father.  He was a murderer from the beginning, and does not stand in the truth, because there is no truth in him.  Whenever he speaks a lie, he speaks from his own nature, for he is a liar, and the father of lies.”

The devil is the “father of lies”, and he is the “father of the sons of disobedience”, and he is the exact “spirit” of disobedience to God, and the spirit of opposition to God.  When ever we are tempted to sin, whether we’re tempted to tell a lie, or to hold a grudge, or to put something in this world first, before God, or to say or do something unkind to someone else, it’s because the spirit of opposition to God is working in us.  And we’ve got to resist that spirit, so that it will flee from us.

James 1:14  says;  “But each one is tempted when he is enticed, and carried away with his own lust.”  It’s us, allowing the spirit of satan to have a place in our mind, and sometimes in our heart.  We need to be afraid of that.  Remember what Peter said?  “Be of sober spirit, be on the alert.  Your adversary the devil prowls about as a roaring lion, seeking whom he may devour.”  (1 Peter 5:8)

The spirit of evil has power in this world, and it has authority too.  It has the authority to do whatever it is that we will allow it to do.  We better now allow it to spend any time in our hearts or in our minds.  We better resist, we better refuse, we better look to God.  When were tempted is when we better start thinking about our faith.  Remember what we’re told in  1 Corinthians 10:13?  “No temptation has overtaken you, but such as is common to man.  And God is faithful, who will not allow you to be tempted beyond what you are able to bear, but with the temptation will provide the way of escape also, that you may be able to endure it.”  “Submit therefore to God, resist the devil, and he will flee from you.”   (James 4:7)

THE root of ALL evil, is the devil.  The devil  is the father of lies, and the father of disobedience, and the very spirit of opposition to God.  That’s what we need to be afraid of in this world.  The spirit that will keep us separated from God.

But you know what will keep us safe from the devil don’t you?  It’s the fear of God, the reverence of God.  “Fear God, and keep His commandments, for this is the whole of man.”  (Ecclesiastes 12:13)