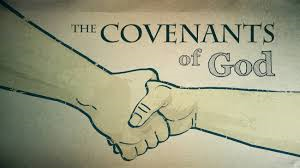 God Has Made Several Covenants With Man

Last week I talked about the old covenant and the new covenant.  And today I want to talk more about all of God’s covenants with man.  There’s a lot of words that are synonymous with the word covenant.  Here’s several of them;  A covenant is the same as an agreement, or a treaty, or an alliance, or a pact.  And it can also mean a pledge (which is the same as a promise), or it can mean a constitution, or an ordinance.  A constitution, or an ordinance, is the same as a law, or a command.  And when you look at it that way, you can see that when God gives a set of laws, or even when He gives just one command, He’s making a covenant.

So with those synonyms in mind, what’s the very first “covenant” that God ever made with man?  Wouldn’t it be in  Genesis chapter 2?   Here’s the covenant, given in  Verses 15 thru 17;  “Then the Lord took the man and put him into the garden of Eden to cultivate it and keep it.  And the Lord God COMMANDED the man saying;  (remember, an ordinance is a covenant) From any tree of the garden you may eat freely, but from the tree of the knowledge of good and evil, you shall not eat!  For in the day that you eat from it, you shall surely die.”

God had just made a covenant with Adam, by saying;  Here’s what I have done for you, and here’s what you need to do for Me.  When God makes a covenant, it doesn’t have to meet with our approval, does it?  Man is not always given a choice as to whether or not he accepts that covenant.  It’s more like what we read in  Psalm 33:9;  “For he spoke, and it was done;  He commanded, and it stood fast.”

But this covenant also had a spiritual side to it.  The spiritual side of the covenant, was the consequences that would follow, if Adam chose not to obey that one ordinance.  And of course, here’s the consequence that was spelled out by God;  “For in the day that you eat from it, you shall surely die.”   Spiritual death was the consequence.  So this spiritual side of the covenant could be called a “treaty”, or “an alliance”.   God and Adam had a spiritual alliance with each other.  They had peace and fellowship with one another, just like when there’s a treaty between two parties.  But physical disobedience by Adam, would break that alliance, or that “peace treaty”, you might say.

Now as long as we’re talking about covenants and alliances, couldn’t we say that God made a covenant between man and woman?  He certainly made an alliance between them.  Genesis 2:23 & 24  says;  “..This is now bone of my bones, and flesh of my flesh.  She shall be called woman, because she was taken out of man.  For this cause a man shall leave his father and mother, and shall cleave to his wife, and they shall become one flesh.”   That’s an alliance!   So God formed this alliance, and God says that no one but Him can break this alliance.  Isn’t that what Jesus said in  Mathew 19:6;  “..What therefore God has joined together, let no man put asunder (or separate).”   Man cannot break the covenant of marriage, only God can!

And another thing to mention about the covenant between a man and his wife, is that this covenant is a physical covenant.  There’s really no direct spiritual implication to the covenant.  Now surely we understand that this union of man and woman, can be a great source of strength to both individuals in their spiritual life.  And we also understand that we will have great anticipation of being reunited spiritually, with that person in heaven.  But the covenant really exists for the physical benefit of the man and woman, which includes the physical and emotional companionship that we all need as humans.  And it exists only for the duration of the man and woman’s physical life.

Now evidently, God had made another covenant with Adam and Eve, and with their sons Cain and Abel, after Adam and Eve were driven out of the garden.  And that covenant had to do with them offering animal sacrifices for the guilt of their sin.  And so we’d probably have to call that a treaty, because God was making peace with them, after they sinned.  But we’re really told anything about that, other than the fact that Cain and Abel did offer sacrifices to God.  So we’ll go on from there, to the next covenant that IS specified in the bible.

In  Genesis 6:17 thru 22,  here’s what it says;  “And behold, I, even I am bringing the flood of water upon the earth, to destroy all flesh in which is the breath of life, from under heaven.  Everything that is on the earth shall perish.  But I will establish My covenant with you, and you shall enter the ark, you and your sons, and your wife, and your son’s wives with you.  And of every living thing of all flesh, you shall bring two of every kind into the ark, to keep them alive with you.  They shall be male and female.  Of the birds after their kind, and of the animals after their kind, of every creeping thing of the ground after their kind.  Two of every kind shall come to you to keep alive.”

“And as for you, take for yourself some of all food which is edible, and gather it to yourself, and it shall be for food for you, and for them.  Thus Noah did, according to all that God had commanded him, so he did.”

This next covenant that God  made, wasn’t made just between God and man, or between man and woman.  This one was made between God and every living thing on the earth.  The covenant, and in this case it’s a pledge, or a promise, is stated in  Genesis chapter 9, and verses 8 thru 17.  Let me read those verses;

So this covenant made by God, is a pledge and a promise, made to every living creature on earth, not just with man.  And I’d like you to notice as we read these next several verses, that there are no stipulations, and no conditions to be met, for this agreement to remain in force.  It’s a two-party covenant, between God and every living creature that He created saved through the ark, but there are no requirements in this covenant, other than the keeping of the promise made by God.  And so this covenant will go on, as long as physical life itself goes on.

Let’s continue reading, beginning with  verse 11;  “And I establish My covenant with you, and all flesh shall never be cut off by the water of the flood, neither shall there again BE a flood, to destroy the earth.”  What God is saying in that verse, is this;  I am establishing My covenant with you, and here is that covenant;  All flesh will never again be destroyed by a flood of water.  That’s the covenant.  It’s really a pledge and a promise, isn’t it?  God is pledging His covenant.  The next verses tells us more about the covenant, but the covenant IS, that God will never again send a flood of this magnitude upon the earth, as to destroy all flesh.

Now,  verses 12 thru 17;  “And God said;  This is the sign of the covenant which I am making between Me and you and every living creature that is with you, for all successive generations;  I set My bow in the cloud, and it shall be for a sign of a covenant between Me and the earth.  And it shall come about , when I bring a cloud over the earth, that the bow shall be seen in the cloud, and I will remember My covenant, which is between Me and you and every living creature of all flesh, and never again shall the water become a flood to destroy all flesh.”

So now, just for the sake of review;  The first covenant ever made by God was a covenant between God and Adam and Eve, in the garden.  A physical covenant with spiritual implications.  The next covenant that God made, was between Adam and Eve themselves, and between all subsequent men and women who unite together in marriage.  Again, a physical covenant, with spiritual implications.  And then there was the covenant that God had evidently made between Himself, and the family of Adam and Eve, regarding the animal sacrifices that they were required to make, to atone for their sins.  A covenant made specifically for spiritual purposes.   And then the next covenant, which was 100% physical, made between God and all living creatures on the earth, until life itself shall end.

We’ll look at more covenants that God has made with man, in our next article, titled  “Understanding God’s covenants With Man – Part 2”