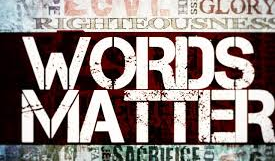 The Words that We Use Make a Difference

If you’ve been listening to the news at all lately, you’ve probably heard this said many times;  “Words matter!”  That’s been said regarding truth and lies.  In other words;  It matters whether the words that you are saying, are true words, or if they are lying words.  And so I think we all have to agree, words do matter.

Words matter even when someone is trying to tell the truth, but they’re not quite understanding the truth completely.   Or maybe they’re simply not understanding how to communicate the truth, accurately.  That’s why it’s so important for us to use the same words that God uses, and to apply the same meaning to them.

A case in point is the fact that the ten commandments, along with the entire old covenant law of Moses, has been completely removed from governing ANYONE, and that the new covenant law of Christ has been established to govern EVERYONE.

I wrote a short article about this subject, and of course I gave several verses of scripture to show exactly what the bible says about it.  And one of the verses that I quoted is  Hebrews 10, verse 9,  which says;  “He takes away the first, in order to establish the second.”   That’s pretty plain and straightforward.  Jesus Christ took away the first covenant for the purpose of establishing the second covenant.  But I had a man respond to me and say that Christ did NOT “take away” the ten commandments, but that they had simply been transferred to the new covenant.  But those aren’t the words that the bible uses to describe the situation.  The bible definitely says that Christ “takes away the first”.  And of course the ten commandments were found within the first covenant.

Now sometimes we will say that nine of those original ten commandments have been re-stated, in the new covenant, but that’s not a completely accurate statement.  Take for instance the commands;  You shall not commit murder, and You shall not commit adultery, and You shall not make false vows.  Those commands have not simply been “transferred” into the new covenant.  But rather, they have been elaborated upon, and changed to a degree, to not only prohibit the act spoken of, but to also prohibit the thoughts and intents involved, as well.

So then, those commandments have not been “transferred” at all, but just like the bible says, they have been “taken away”, and new, more inclusive commandments, have been specified.

Now I suppose that if God had wanted to, He could have left the first covenant in place to govern the Jews, and still have had Jesus come and establish the second covenant to govern the rest of humanity.  But He didn’t do that.  If God had done that, not a single Jew would have ever been saved.  People don’t understand that there was no forgiveness of sins under the first covenant.  So there you would have God’s “chosen people” so to speak;  The very descendants of Abraham, through whom the Christ would come into the world, and they would be the only ones excluded from salvation.  But people don’t understand that, because they fail to accept the exact words of the bible.   “He takes the first away, in order to establish the second.”

What people don’t understand to begin with, and what they argue about, is that the first covenant was given ONLY to the Jews.  But that’s exactly what the bible says.   Jeremiah 31:31 & 32  bears that out when it says;  “Behold days are coming, declares the Lord, when I will make a new covenant with the house of Israel, and with the house of Judah, not like the covenant which I made with their fathers, in the day I took them by the hand, to bring them out of the land of Egypt.”  There was only one nation of people that the Lord our God “took by the hand” so to speak, and brought out of the land of Egypt.  And that nation was the nation of Israel, the nation of the Jews.

Obviously, God didn’t want to have two covenants running simultaneously;  One for the Jew and one for everyone else.  As a matter of fact, God’s whole purpose for the second covenant was to have everyone united, not divided into two groups, but united, for equal salvation.

That’s what the bible says in  Ephesians 2:11 thru 16.   This is such a good reading when it comes to this subject, listen to these verses;

“Therefore remember that formerly, you, the Gentiles in the flesh, who are called ‘uncircumcision’, by the so-called ‘circumcision’, which is performed in the flesh by human hands, that you were at that time separate from Christ, excluded from the commonwealth of Israel, and strangers to the covenants of promise, (the law of Moses) having no hope, and without God in the world.  But now, in Christ Jesus, you who formerly were far off, have been brought near by the blood of Christ.”

The “dividing wall”, which created the “barrier” which in turn created “the enmity”, was in fact the old law of Moses.  It was “the law of commandments, written in ordinances.”  That’s why God didn’t ordain two separate covenants, to be in force at the same time.  Because the very purpose of the second covenant, was to abolish the division between Jew and Gentile, which was created by the first covenant.  And so He abolished the first, “that He might make the two, into one new man, establishing peace.”

And listen to how Paul says that God made that unity come about;  Verse 14;  This is how God made both groups into one new man;  “Having cancelled out the debt of decrees against US, (they weren’t necessarily against YOU the Gentiles, but they were against US the Jews, as well as against the Gentiles) which were contrary to US, and He has taken it out of the way, having nailed it to the cross.”

The law of Moses was “nailed to the cross”!  It was “taken out of the way”!  And Christ “abolished the enmity”!

Forgiveness of sin is at the heart of both laws, and sin is the reason that both laws have existed.   Galatians 3:19  states very clearly, why the old law of Moses was given.  It says;  “It was added because of transgressions..”   That’s sin.  Transgressions, sin, lawlessness, disobedience, it’s all the same thing.  The old law was “added” as the bible says, because of sin.  And of course Jesus stated very clearly why He came to this earth to establish the new law of Christ.  He said in  Luke 19:10;  “For the Son of Man has come to seek and to save that which was lost.”   Man was lost in sin.

Right there we see that there was a time limit, for the law of Moses to exist.  It was to exist, “until the seed should come..”  The seed being Jesus Christ, the seed of Abraham.   And what happened after the seed had come?  What happened was, “He takes away the first, in order that He may establish the second.”

Boy I’ll tell you what;  If God had made it any plainer, we’d have to get us a bunch or two-year olds to teach, just so that we’d have someone here who couldn’t understand this.

The law was “added”.   Just so we understand completely, let’s ask ourselves this;  What was the law added to?  We’re talking about God’s plan of salvation.  And that plan really began with just one man, namely, Abraham.  So God’s plan started with Abraham, and then progressed through Isaac, and then through Jacob, and then through Jacobs twelve sons.  And while Jacobs twelve sons lived in the land of Egypt, they multiplied into basically a nation all their own.  It was the nation, made up of all the offspring of Jacob.  In other words, all the “sons of Israel” made up this nation.

And when God had secured the release of the sons of Israel, from their slavery in Egypt, He brought them out into the wilderness.  And even though they were “God’s people”, all descended from the one man that God had chosen to be “the father of the faithful”, this nation of people was not faithful.   They were sinful, just like everyone else.  And so God added something to that sinful nation of people, to help to curb their sin.  And what God added the them was the law of Moses.  God added His law, to His people.

Now, we are saved by grace aren’t we?   Ephesians 2, verse 8;  “For by grace you have been saved, through faith..”  Well, here’s something interesting about God’s grace.   Galatians 3:19  says that the law of Moses which governed the Jews, and which was basically given to them to save them from their own sinful behavior, “was added because of transgressions..”    Words matter right?  Well, you’d rarely ever even think of this, but let me show you something about the word here that’s translated “because”.

“Because” means..  “on account of, or for the sake of, or because of”.  On account of the transgressions of the people, the law of Moses was added to them, to teach them what sin is, so that they could curb their behavior, so as not to sin as often, right?  So here’s what I find interesting.  The word translated “because, or on account of”, comes from a root word meaning “grace”.

When God added His law to the nation of Israel, he was adding to them His grace.  “For by grace you have been saved.”   Maybe it’s just me, but I find that extremely interesting.  It has always been by God’s grace, and by His love, for sinful man, that His plan of salvation has unfolded.   Because of God’s love for a sinful nation, His grace gave them a law to live by.  So many people think of God’s law as something that binds us, and restricts us.  They feel in prisoned by a law, and so they refuse to follow God’s law.  But God’s law isn’t for the purpose of restricting us.  It’s for the purpose of setting us free, because He loves us.

We usually only think of two covenants, when we think of God’s plan of salvation.  But there have been three separate covenants.  We seem to overlook the first one that came before the covenant with the nation of Israel.  The first covenant was actually made with Abraham.  Listen to  Galatians 3:17;  “What I am saying is this;  The law, which came 430 years later, does not invalidate a covenant previously ratified by God, so as to nullify the promise.”