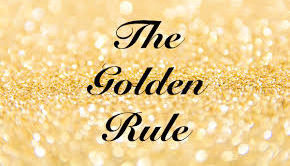 I’m going to read the words of the chorus from that song that’s called, “angry Words”.   And I want to ask you to repeat the words to your self, as I read them.  They have to do with exactly what that scripture reading was all about.

“If you love Me, you will keep My commandments”, Jesus said in  John 14:15.   “And this commandment we have from Him, that the one who loves God, should also love his brother.”

Here’s another simple command from God;  “Do Unto Others, As You Would Have Them Do Unto You”.

That’s what people call “The Golden Rule”.   Jesus said, in  Luke 6:31;  “And as you wish that men should treat you, so also treat them.”  All the different versions of the bible word it a little differently, but they all mean the same thing.  “Do unto others, as you would have them do unto you.”

That sounds like a pretty simple little rule, but is it?  It must be a lot harder than it sounds, because I don’t think it gets done anywhere near, often enough.  Do you think most people actually do..  Do unto others as they would like others to do unto them?   I think that most people, including ourselves, treat others very nicely in casual situations, as long as things don’t impose too much on our personal life.   But when things do get “personal”, you knowhow easy it gets, to be a bit “self-centered”.  A bit “uncaring”, and a bit “unbending”.  You know how it can be.

You know what the problem is right?  And sometimes, treating YOU, the way I want to be treated, doesn’t get ME, what I want.

But God’s word says  “..but with humility of mind, let each one of you regard one another as more important than your self.  Do not look out for your own personal interests, but for the interests of others.”  (Philippians 2:3-4)

If you would like it if someone gave you a compliment, then give them a compliment instead.  Do unto others.

If you would appreciate it, if someone would pray for you, then pray for them.  Do unto others.

How would you like it if a friend gave you some small gift, nothing expensive, just something to say thanks for being a friend?  Would you like that?  Then why don’t you do that, for a friend of yours?  Do unto others.

If everyone did that, it would be inevitable, that it would come back around to you, and you’d get just what you want after all.  And so all we’d have to do, is just be patient, and do unto others.  But you know what?  Even though we know that the world isn’t really going to “help us along” with that..  Why don’t you just “do unto others, as you would have them do unto you, anyhow?  And I think I can guarantee you, (because I know what the scriptures say) that it will all work out for good for you, in the end.

Love your neighbor as yourself.  The Jews one time asked Jesus;  “Who is my neighbor?”  And Jesus answered by telling them a parable.

The Parable of the Good Samaritan

29 But he, desiring to justify himself, said to Jesus, “And who is my neighbor?” 30 Jesus replied, “A man was going down from Jerusalem to Jericho, and he fell among robbers, who stripped him and beat him and departed, leaving him half dead. 31 Now by chance a priest was going down that road, and when he saw him he passed by on the other side. 32 So likewise a Levite, when he came to the place and saw him, passed by on the other side. 33 But a Samaritan, as he journeyed, came to where he was, and when he saw him, he had compassion. 34 He went to him and bound up his wounds, pouring on oil and wine. Then he set him on his own animal and brought him to an inn and took care of him. 35 And the next day he took out two denarii[a] and gave them to the innkeeper, saying, ‘Take care of him, and whatever more you spend, I will repay you when I come back.’ 36 Which of these three, do you think, proved to be a neighbor to the man who fell among the robbers?” 37 He said, “The one who showed him mercy.” And Jesus said to him, “You, go and do likewise.”

Do you see that happening in the world?  Do you see people loving others as themselves, and proving to be a neighbor to those in need?  Sometimes we do, but more often than not, we don’t.

Here’s the really important question;  Do you see it happening in YOUR life, and in YOUR behavior?   Do you love others, as you love yourself?  And do you DO unto others, as you would have them to do unto you?  And do YOU prove, to be a “neighbor”, to those in need?

Have you ever criticized someone, or said something behind their back, when you know full well, that you wouldn’t say the same thing to their face?  Have you ever done that?   Is that how you want people to treat you?  Maybe someone HAS done that to you, and you found out about it.  If that has ever happened to you, then you know how it made you feel.

Sometimes we say things that we just shouldn’t say.  Sometimes we get frustrated, sometimes we get angry, and sometimes maybe we just don’t agree with someone.  And a result, we treat someone in a way that we sure wouldn’t want them to treat us.  But that just goes to show how imperfect we all are.  And it shows how un-loving we sometimes are.

Jesus said in  Mathew 7, verse 2;  “For with what judgment you judge, you shall be judged.  And with what measure you mete, it shall be measured to you.”  That verse fits here doesn’t it?  Do unto others, as you would have them do unto you, because, with what measure you measure to them, the same will be measured back to you.  And give your love, to your neighbor, so that God can measure His love, back to you.

If you were to say things to someone, about another person, but you wouldn’t say those same things to that other person’s face, what do think the reason for that would be?   Would it be that the things you’re saying, have no business being said in the first place?  And would it be that what you’re saying, is hurtful, instead of being helpful?  And would that be a reflection, of the fact, that we don’t love GOD like we should?  But we’ve never acted like that, have we?

God exhorts us, in  Philippians 2:5 thru 7;  “Have this attitude in yourselves, which was also in Christ Jesus, who although He existed in the form of God, did not regard equality with God, as a thing to be grasped, but emptied Himself, taking on the form of a bond-servant, being made in the likeness of men.”