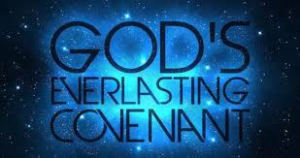 You’ll probably remember from last week, how I said that the bible uses the phrase “everlasting covenant”, in regards to four different covenants that He has made with man.  The first one was the covenant of the rainbow in the sky, and God’s promise to never again destroy the world with a flood of water.  That’s from  Genesis 9, 11 thru 17.

The second “everlasting covenant”, was the covenant that God made with Abraham and with his offspring, concerning the land of Canaan, which God said that he would give to Abraham’s offspring, as an “everlasting possession”.   And that is stated in  Genesis 17, verses 1 thru 8.

The third covenant, was the covenant that God made with King David, and with HIS offspring, and it’s a two-part covenant.  The first part is given in  2 Samuel 7, verses 8 thru 15,  and it has to do with the building of the temple in Jerusalem, by David’s son Solomon;  And the second part of that covenant, is given in  verse 16,  which says; “And thy house, and thy kingdom, shall be made sure, for ever before thee;  Thy throne shall be established forever.”

Four individual covenants, each of which the Lord refers to as, “an everlasting covenant”.

The Law of Moses and the Ten Commandments

For example, the bible says in  Exodus 34, verses 27 & 28;  “And Jehovah said unto Moses;  Write thou these words;  For after the speaking of these words, (that means, after the “substance” of these words, or “according to what these words say) ..I have made a covenant with thee, and with Israel.  And he (Moses) was there with Jehovah, forty days and forty nights;  He did neither eat bread, nor drink water.  And He (God) wrote upon the tablets, the words of the covenant, the ten commandments.”

Those are a couple of interesting verses.  The ten commandments specifically, are called, a “covenant”.  But it’s interesting, that all the rest of the many laws that God proceeded to give to Moses, to give to the people of Israel, are not specifically referred to as a “covenant”, although I can’t see how they WOULDN’T, be considered to be, a covenant.  A covenant, is simply an agreement between two parties.  And God says;  If you obey My laws, I will bless you;  That’s the agreement, and that’s a covenant.

The listing of the ten commandments, takes up fifteen verses of scripture, in  Exodus 20, verses 3 thru 17.   But then it takes the next eleven chapters, for all the other “laws”, that God gave to Israel, to be specified, and elaborated upon.

Things like family relations are specified, and business dealings and business relations.  And the Levitical priesthood, is dealt with in much detail, as is the tent of meeting, which was the tabernacle.  And all the items of worship that go in the tabernacle, as well as the “Holy of Holies”, the innermost part of the tabernacle, where only the high priest could enter into.

So you can see how the belief, that the ten commandments are still in effect, isn’t something that people have “grabbed out of thin air”, but that belief is actually BASED, on what the bible says;  But the problem is, it’s not based on, THE WHOLE, of what the bible says.  And therefore, the result is, a misunderstanding of the purpose, and the longevity, of the “covenant” of the ten commandments.

Now, I’d like you to consider, one of those four covenants, that I mentioned earlier.  The specific covenant that I’m referring to, is the covenant that God made with Abraham, and with his offspring, concerning their possession of the land of Canaan.

The first time that God spoke to Abraham, making mention of this covenant, was in  Genesis chapter 12,  while Abraham was making his journey, from the land of his birth, which was the land of Ur of the Chaldees, and on his way to the land of Canaan.  So let me read to you what God said to Abraham on this occasion..

The bible says, in  Genesis 12, verses 1 thru 4;  “Now Jehovah said unto Abram;  Get thee out of thy country, and from thy kindred, and from they father’s house, unto a land that I will show thee.  And I will make of thee a great nation, and I will bless thee, and make they name great, and be thou a blessing.  And I will bless them that bless you, and him that curses you, I will curse;  And, in thee, all the families of the earth shall be blessed.  So Abram went, as Jehovah had spoken unto him.  And Lot went with him.  And Abram was seventy and five years old, when he departed out of Haran.”

Now God didn’t mention anything here about a “covenant”, but God was indeed making an agreement with Abram, wasn’t He?  God said, if you will do this for Me, then here’s what I will do for you.  Specifically, God says;  “Get thee out of thy country, and from thy kindred, and from thy father’s house, unto a land that I will show thee”

Two Promises;  One Physical, and One Spiritual

That’s what Abram had to do for God.  And here’s what God promised to do for Abram, in return;  God actually made two promises;  “I will make of thee a great nation, and I will bless thee, and make thy name great, and be thou a blessing.  And I will bless them that bless you, and him that curses you, I will curse.”  That’s the first promise that God made to Abram.  Now here’s the second promise..

“And, in thee, all the families of the earth shall be blessed.”   Now, I don’t know if Abram understood at the time, that these were two different promises.   You see, at the time, God didn’t really specify that fact.  But WE know, because of what we learn from the rest of the bible, that indeed it is a fact, that those are two different, and separate promises.

For example;  We learn from the bible, that the “great nation”, that God promised to make of Abram, was the nation of Israel.  And of course, the NATION of Israel, was literally comprised, of the physical sons, of the MAN named Israel, who was originally named Jacob.  And of course Jacob, was the physical grand-son, of Abram.  And God repeated this promise, to Isaac, Abram’s son, and also to Jacob, his grand-son.

Galatians 3, verse 16  tells us;  “Now to Abraham were the promises spoken, and to his seed.  He saith NOT.. (God saith not) ..and to seeds, as of many, but as of ONE;  And to thy SEED, which is Christ.”  It was God’s eternal will, and God’s eternal plan, that the ONE seed of Abraham, through whom ALL the nations of the earth would be blessed spiritually, was Jesus Christ.

You may remember this prophecy, spoken by Isaiah, in  Isaiah 2, verse 2;  “And it shall come to pass in the later days, that the mountain of Jehovah’s house shall be established on the top of the mountains, and shall be exalted above the hills, and all nations shall flow into it.”  All peoples, from all nations, can be the “spiritual seed” of Abraham, through Jesus Christ.  And, they can all be members, of the ONE “spiritual nation” which is called, “the kingdom” of Christ.

Galatians 3, verse 29,  puts it this was;  “And if you are Christ’s, THEN you are Abraham’s seed, heirs according to promise.”  And that, is the spiritual promise, that God made to Abram, at the very same time, that He made the physical promise, to Abram.  Two different promises, one physical, and one spiritual.  One concerning the physical “promised land” of Canaan, and one concerning the spiritual “promised land” of heaven.

And I find this next fact very interesting.  Both promises were made to Abraham, at the same time, but only one of those promises, are referred to by God, as an “everlasting covenant”.  As I pointed out previously, the promise of physical blessings, is spoken of, in  Genesis 17, verses 7 & 8,  with these words;  “And I will establish My covenant between Me and thee, and thy seed after thee, throughout their generations, for an everlasting covenant, to be a God unto thee, and to thy seed after thee.  And I will give unto thee, and to thy seed after thee, the land of thy sojournings, all the land of Canaan, for an everlasting possession, and I will be their God.”

And so, a promise of physical blessings, which actually came to an end long ago, as witnessed by the fact that the nation of Israel had the land of Canaan taken away from them, is referred to by God, as an “everlasting covenant”.  However, a spiritual promise, which actually is still in effect to this very day, and will be in effect until the promise is completely fulfilled in eternal life, is NOT called, an “everlasting covenant”.  As a matter of fact, it’s not even called “a covenant” at all.  But rather, God has chosen to continue to always call it, “The Promise”.   And I think that’s a significant fact.

Here’s what God says, about the relationship of the “Promise” given to Abraham, and “covenants” that came later.  God says, in  Galatians 3, verse 17;  “Now this I say;  A covenant confirmed beforehand by God, the Law, which came four  hundred and thirty years later, does not nullify the Promise, to make it of no effect.”   So then, God is making a clear distinction, between what He calls “the Promise”, and what he calls “a covenant”.

Now once again, don’t misunderstand;  A promise, IS a type of a covenant;  However, THIS Promise, is so significantly different, that God always refers to it as, “The Promise”.  There have been many covenants, even “everlasting covenants”, but this is God’s greatest and highest “Promise”!   And  1 John 2, verse 25  tells us;  “And this IS the Promise, that He has promised us, even life eternal!”  All the earthly covenants, all added up and put together, can’t compare with “The Promise”, of eternal life.

You want eternal life, don’t you?  Well, there’s only one way to receive it;  Obey the covenant that you live under, which is the new covenant, in the blood of Christ, and receive “The Promise”, from God.

Before I finish for today, I want to tell you, that next week, Lord willing, I’ll be talking a little more, about “The Promise” of eternal life.  But I’ll also be talking about the relationship, between the physical “covenant” that God made with Abraham, and his offspring, and the “covenant” of the ten commandments, and the law of Moses.  So that will be very interesting.

And now I’ll close with these words..  “Hear” the word of God;  “Believe” that Jesus is the Christ;  “Confess” your faith in that truth;  “Repent” of your sins, continually;  As often as you may sin, that’s how often you must repent;  And, “Be Baptized” for the forgiveness of your sins;  Be “Born Again” spiritually, through baptism, and then, “Remain Faithful” unto death, and you’ll receive the “crown” of eternal life.

The invitation is yours..