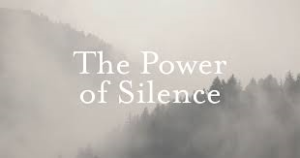 Does Silence Mean Liberty, or Constraint ?

So then first, here’s something that the bible is NOT silent about, concerning the Lord’s supper.  The bible is not silent, concerning the “ingredients”, to be used, in the Lord’s supper.  Jesus gives us the commandment to take unleavened bread, as a symbol of His body, and to take the fruit of the vine, as a symbol of His blood, and to consume these “emblems”, in memory of Him.

Mathew 26, verses 26 thru 28  says this;  “And as they were eating, Jesus took bread, (this was a Passover meal, that Jesus and the disciples were having.  And during the Passover, there was no leaven, in any Jewish household, therefore, there is no doubt, that this was unleavened bread)  So..  “Jesus took (unleavened) bread, and blessed it (He gave thanks for it) and break it, and He gave to the disciples, and said;  Take eat, this is My body.”  (It represents His body.  The disciples surely knew, that that bread they were eating, was not literally, flesh from Jesus’ own body)

Did Jesus Say, One Cup ?

Some people hold to the teaching that we must ALL, drink from ONE cup, when we take the Lord’s supper.  Because they think, that Jesus was saying;  “Drink ye ALL, from this cup.”  But of course, if Jesus had been saying that, then we’d have to have THAT cup, in our possession, wouldn’t we?  But of course that’s impossible, so we can see how unreasonable that conclusion is.

And so those people say; Well, Jesus didn’t mean THAT particular cup, He simply meant from ONE cup.  But we can read the scripture over and over again, and no matter how many times we read it, we see that Jesus doesn’t say anything, about ONE cup.  As a matter of fact, the scriptures are SILENT, about the number of cups to be used.  And so in this case, the silence of the scriptures, gives us the liberty, and the freedom, to choose for ourselves, how many cups we will use, as we drink OF, the fruit of the vine.

So then, if Jesus wasn’t telling us to all drink from the same cup, then what was He saying in that verse?  Well, let’s read it again, but let’s read the next verse along with it, so that we don’t become guilty of taking one verse, out of context.  So here are  verses 27 & 28,  so that we get the proper context;  “And having taken a cup, and having given thanks, He gave to them saying;  Drink of it, ALL of you.  For THIS, in My blood of the covenant, being poured out for many, for the forgiveness of sins.”

Did you hear what Jesus said?  “THIS, is My blood of the covenant..”  In other words, THIS, is a symbol of My blood.  Well, exactly what is it, that is a “symbol” of Christ’s blood?  Is the cup that He was holding symbolic of His blood?  Was the cup painted red or something?   Or, was the fruit of the vine, which was inside the cup, a symbol of His blood?  It doesn’t take a genius to figure it out, does it?

“THIS is My blood of the covenant..”  What does “THIS”, refer to?  THIS, obviously refers to what they were just told to drink of.  Drink Ye   OF, this fruit of the vine.  ALL of you, drink of it!

Who is to Partake of the Fruit of the Vine ?

Now that is something that the bible is NOT silent about.  How many of the Christians are supposed to drink of the fruit of the vine?  Are we at liberty to choose how many of us drink of it?  Jesus said..  “ALL of you, drink of it!”

Have you ever seen the Catholic priest give everyone a little wafer of unleavened bread, at one of their services..  But then not give anyone the fruit of the vine?  The priest would be the only one to partake of the fruit of the vine.  Why is that?  Well, it’s because they don’t have any respect for the word of God, that’s why.  They think they can twist it, and change it, and that somehow they don’t have to obey it.  Well they’re wrong!  They’re dead wrong!

If you were to find yourself in a place where they tried to tell you that you’re not allowed, to partake of both the unleavened bread, and the fruit of the vine, then you better get out of that place fast, before you die spiritually.

Do you think that’s a “bold” statement, that if you don’t partake of the Lord’s supper, on the first day of every week, whenever possible, that you could die spiritually?  Well, I don’t know if it’s “bold” or not, but it’s true.  Now I’m sure that there’s a lot of people that would say that I don’t know what I’m talking about.  And they’d probably say that I’d better shut up about claiming that you’re gonna “die” spiritually, just because you don’t partake of the Lord’s supper.  But what if the bible actually says that?  What if the bible at least, implies that?

Maybe we better investigate it a little more.  What do you think..  Is the bible “silent” about there being a relationship, between partaking of the Lord’s supper, and remaining “alive” spiritually, or not partaking, and actually “dying” spiritually?

Let me ask you this question..  What do you think would be worse, for your spiritual condition;  To not partake of the Lord’s supper at all, or to partake of it, but to make a mockery out of it?  Which would be worse?  Do you remember the passage in  1 Corinthians chapter 11,  where the apostle Paul was rebuking the congregation at Corinth, because they turned the Lord’s supper into a common meal?  They totally made a mockery of it, and they totally ignored the very purpose of it.

Now listen to this next verse,  verse 22;  “What? Have you not homes to eat and drink in?  Or do you despise the congregation of God, and put them to shame, that have not?  In this I praise you NOT!”

The Corinthians were making a common meal out of the Lord’s supper, “eating his own supper first”, the scripture says.  The congregation was supposed to be worshipping God;  But what were they doing?  They were eating and drinking, to satisfy their fleshly lusts, while in the worship assembly!  Paul said; “I praise you NOT!”   He was condemning them.  And they deserved to be condemned.

What’s worse for your spiritual well-being..  Making a mockery of the Lord’s supper, or refusing to partake of it at all?  I’m glad that I don’t have to be the judge of that.  But at least we know that God’s not SLIENT about it.  You be the judge, while you live this life, and God will be the judge later on.

So this topic, “The Silence of the Scriptures”, is a very important topic.  And that’s why I plan to continue on, with a couple more lessons on this topic.  But we’ll, quit for now.  But remember how God has NOT been silent, in regards to His eternal plan of salvation.  We must, hear His word, because there’s no other source of faith.  “So then faith comes by hearing the word of God.”  Romans 10:17.

And we must, truly repent of our sins.  “Unless you repent, you will all likewise perish.”  Luke 13:3.

And we must, be buried with Christ, in baptism, for the forgiveness of our sins, if we want to be saved from those sins.  “And now, why do you delay?  Arise, and be baptized, and wash away your sins, calling on His name.”  Acts 22:16.

The Lord has spoken;  Now it’s up to us to be silent and obey.