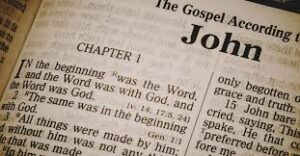 The Logos is God !

Is Christ lesser than God, in power?   Hebrews 1, verse 2  says;  “..Through Whom also He made the world.”   It must have required a lot of power to create the world.  And through Christ, God made the world.   John 1, verse 3  says;  “ALL things were made by Him;  And without Him, was not anything made, that was made.”

Is Christ lesser in authority?   Jesus Himself said in  Mathew 28:18;  “ALL authority has been given to Me, in heaven and on earth.”   ALL authority.   Jesus said in  Mathew 9, verse 6;  “But that ye may know that the Son of man has power on earth to forgive sins, (then he says to the paralytic,) Rise up, take up thy bed and go to thy house.”   The authority to forgive sins!   The scriptures say in  Mark 2, verse 7;  “Why does this Man speak blasphemies like this?  Who can forgive sins but God alone?”   That’s a good question isn’t it?  “Who can forgive sins, but God alone?”   You know the answer don’t you?  No one, but God alone !

Is Christ lesser in importance, or we might say, in preeminence?   Colossians 1:18  tells us that  “..He is the head of the body, the church; Who is the beginning, the firstborn from the dead;  That in ALL things, He might have the preeminence.”

But the Bible has a lot more to say about this Subject..

That statement..  “The Word was WITH God”, might be a little misleading to some people though.  Sometimes when we say that something was WITH something, we’re talking about two different things.  (Like maybe a watch, that comes with a battery)

When the bible says that “the Word was WITH God”, it’s talking about one “aspect” or one “feature” of God, being an integral part of the whole God.  “The Word was with God”.  In other words, the Word of God, is an integral feature of the one complete God, Who is the Father of everything.  And likewise, the Spirit of God, is another integral feature, of the one complete God and Father.    So then God Consists of God the Father, and God the Word, (Who became the Son) and God the Spirit, (Who is the Holy Spirit).

Let’s talk a little more about the word “with”, and what it means.  Sometimes we might say that a woman is “with” child.  One of the scriptures is actually translated like that, in  Mathew 1, verse 18.   Many versions of the bible translate the verse like this..  “Now the birth of Jesus Christ was as follows;  When His mother Mary, had been betrothed to Joseph, before they came together, she was found to be WITH child by the Holy Spirit.”

But what exactly is, the “Word” ?   The Word always existed as Deity, but what is the “Word”?   Is it the written word that we have in the bible?   Well, that certainly is a part of it now, but it wasn’t a part of it back then.  Because there was no bible at the beginning of time;  There was no written word.

So then if the Word that has always existed, wasn’t a written word, was it a spoken word?   God “spoke” the creation into existence, so to speak, didn’t He?   Throughout the first chapter of Genesis, we keep reading the words..  “God said”.   And  Palm 33, verse 9  says;  “For He spoke, and it was done; He commanded, and it stood fast.”  So is the Word, a spoken word?   Actually, the “Word” is much more, than JUST a spoken word.

In  John 1, verse 1,  the original word is “Logos”,  I’m sure most of you already know that.   “Logos”..   But exactly what does “logos” mean?   In the new testament, the word “logos” has a very broad application.  It’s used 330 times, with reference to communication through speech.  It sometimes means, “a discourse”;  Like in  Acts 20, verse 7,  where the scripture says that Paul “discoursed to them until mid-night..”

But in  John 1 verse 1,  “Logos” has a much more specific meaning, than simply a communication or a discourse.  The actual underlying meaning of “logos”, isn’t necessarily the words that are spoken, but rather, it’s the expression of one’s thoughts.   It’s the embodiment of the ideas which exist, in the mind of the one expressing those ideas.

And obviously, since God has existed eternally, so also have His thoughts existed eternally.  Could you not say that the thoughts and ideas, in the mind of God, are the essence of God Himself?   I think you would have to say that.

And these logos, have become symbolic of the entire company.  They represent the very essence of the company, whether it’s McDonalds, or Apple, or Nike, or Google, or Coca-Cola, or whatever it is.   And that’s how it is with the “Logos” in reference to God.  “Logos” is the very essence of God in thought and idea.  The expression of God;  The embodying of the ideas and the mind of God.

In  Hebrews 1, verse 3,  the bible tells us that Christ, (the Logos) “is the radiance of His glory (the radiance of the glory of God) and the exact representation of His nature..”   He’s the “Logos” of God !!

And of course that’s why Jesus Himself said, in  John 14, verse 9;  “..he that hath seen Me hath seen the Father..”  Jesus was the physical representation, of the very mind and thoughts of the Father in heaven.

John 1, verse 14  says;  “And the Logos became flesh, and dwelt among us..”  (The “Logos”, the very thoughts and mind of God, became the very Son of God, Who is the Christ, the Anointed One.  In other words, the Logos, became “the Chosen One”)   And  verse 14  says;  “And we beheld His glory;  Glory as the only begotten of the Father, full of grace and truth.”   Grace and truth IS the essence of God.  Along with of course love and mercy and a few other things.

But the point I want you to focus on, is the fact that the “Logos”, which is Deity, which is God..  became flesh!  God, took on a fleshly body, and lived on this earth, among men.  And men beheld His glory!

Listen to the words, of  Philippians 2:5 thru 8;  “Let this mind be in you, which was also in Christ Jesus;  Who, existing in the form of God, (The Logos existed as God)  But, He “did not consider equality with God something which had to be held on to.   But He emptied Himself, taking the form of a servant, being made in human likeness. (in the likeness of men)  And being found in appearance as a man, (He appeared as a man, but He was God!)   He humbled Himself, and became obedient to death—even death on a cross.”

The almighty God of heaven, humbled Himself (and most of the time we can’t even humble ourselves!)  But God humbled Himself, and took on the “appearance” of a man, though He was GOD!  Christ can make Himself appear in any form He chooses.  He once appeared before Moses as “fire”, in a burning bush.  (Exodus 3, verse 2)  He once appeared before Joshua as “the commander of the army of the Lord”.  (Joshua 5:14)   But He was no less God, each time He appeared.  And then He took on the appearance of a man, and He lived on this earth for about 33 years.  But He was no less God while He walked the earth, than when He created the earth!

Make no mistake about it;  Jesus the Christ, the “Word of God”, the eternal “Logos”, IS the eternal God, with all the power and authority, of God.

This article has 3 Comments