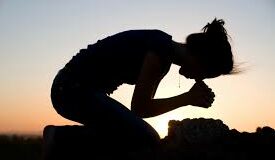 Let me read to you what someone recently wrote..

Yes, I believe it is time to take a knee.

It is time to take a knee and thank the Creator for the food and clothing we take for granted.  It is time to bow and give thanks to the Almighty for the freedom to vote and preach our convictions.  It is time to drop down and bless the name of God for preserving our nation in spite of our complaining.

Yes, it is high time to take a knee.

It is time to take a knee and ask God to forgive us of our pride and selfishness.  It is time to get down on our knees and repent of closing our eyes to the slaughter of the unborn and the perversion of marriage.  It is time to kneel and confess that our biggest problem is forgetting God.

Yes, it is past time to take a knee.

Oh yes, we had better get down on our knees. The day is coming when “every knee will bow” (Romans 14:11). Kneel now or kneel later—that is the fact a spoiled nation must admit before we can get back on our feet.

And now, here’s a little article written by a man named Kerry Duke..

“Oh come, let us worship and bow down; let us kneel before the Lord, our Maker!”  (Psalm 95:6).  A man who was a great preacher of the gospel of Jesus Christ for more than seven decades, and a dear friend of mine, was Denver E. Cooper (1923-2015).  He once shared with me that when he began his preaching career in the 1930s many church people would kneel when they prayed.  Do we do much of that today?  If not, one wonders why.

Another great gospel preacher was Paul the apostle of Christ  (2 Timothy 1:10-11).  In writing to the church at Ephesus, he said: “. . . I bow my knees before the Father . . .”  (Ephesians 3:14).  It has been reported that Abraham Lincoln was once asked by Noah Brooks, a young reporter for a Sacramento, CA, newspaper, about whether he (Lincoln) prayed.  (When was the last time, if ever, we heard a member of the Press ask a question like that?)  Lincoln responded to the young reporter’s question with the acknowledgment that from the moment he became President, he prayed every day  (cf. Moore 184).  Lincoln further said,  “I have been driven many times to my knees, by the overwhelming conviction that I had nowhere else to go”  (Scribner’s 340; cf. Moore 482).

Physical posture in prayer can be significant because such may reflect one’s attitude of reverence, or the lack thereof.  “The bodily attitude during prayer . . . reflects the soul’s attitude toward God.  Kneeling expresses humiliation and lowly supplication”  (Lenski 489).

It is obvious there is no exclusive physical posture for acceptable prayer. However, in addition to being an actual physical posture, “on our knees,” as a metaphor, can powerfully remind us of our need for God.  It can reflect the soul’s attitude toward God.  It can be illustrative of foundational fundamentals, concerning man’s relationship to God.

A POSTURE OF IDENTITY

Within this phrase “on our knees” is the implication of what actually does distinguish humans from all other creatures on Earth.  Literally, and figuratively, humans are able to kneel in prayer.  The ultimate mark of distinction is not the physical positions of standing upright, or down on all fours.  It is the capacity within, which includes the ability to worship and pray, that makes humans ultimately different.  This includes “the image of God”  (Genesis 1:26-27)—the imago dei.   What a profound doctrine!  As James Orr affirmed in a classic book, The Christian View of God: “. . . The oldest declaration in the Bible about man . . . implied in every doctrine of the Christian system” is “man made in the image of God” (142).

God miraculously made the human body from dust (Genesis 2:7, 21-23).  Matthew Henry eloquently described it in the following: “Man was not made of gold-dust, powder of pearl, or diamond dust, but common dust, dust of the ground”  (5).  Humans—male and female—are “fearfully  and wonderfully made”  (Psalm 139:14),  with the miracle that produced woman, resulting from God causing a deep sleep to fall on Adam, removing a rib from Adam, from which He made a woman,  Again, Henry describes it wonderfully, because such is wonderful!

Woman was made of a rib out of the side of Adam; not made out of his head to rule over him, nor out of his feet to be trampled upon by him, but out of his side to be equal with him, under his arm to be protected, and near his heart to be beloved. (7)

The human body is an absolute masterpiece! Henry Ward Beecher said,  “God made the human body . . . exquisite and wonderful . . . a study for one’s whole life. . . . If an undevout astronomer is mad, an undevout physiologist is even madder”  (63).   However, the body is only one-third of man’s existence. Man has a body but also a spirit and soul  (1 Thessalonians 5:23; Hebrews 4:12).  Longfellow correctly concluded:  “Dust thou art, to dust returnest, Was not spoken of the soul” (qtd. in Watson 125; cf. Ecclesiastes 12:7). From my youth I recall the experience of hearing the Hebrew and Greek scholar, Hugo McCord, say: “There is something in man that didn’t come from the barnyard!”  The Holy Scriptures say it better:  “He has made everything beautiful in its time. Also, He has put eternity into man’s heart . . .” (Ecclesiastes 3:11, ESV).  “On our knees” is a reminder of our metaphysical nature.

THE PROTECTOR OF LIBERTY

Within the phrase “on our knees” there is also the implication which serves as the protector of true freedom.  The most remembered statement of Thomas Jefferson within The Declaration of Independence of the original thirteen united States of America is:  “We hold these truths to be self-evident, that all men are created equal, that they are endowed by their Creator with certain unalienable Rights, that among these are Life, Liberty, and the pursuit of Happiness.”  In his Notes on the State of Virginia, Jefferson asked:  “Can the liberties of a nation be thought secure when we have removed their only firm basis, a conviction in the minds of people that these liberties are the gift of God?”

“On our knees” implies the absolute foundation of freedom. The Founders of America affirmed and defended the proposition that liberty and morality are self-evident absolutes, which objectively reside in the reality of God.  As there can be no life without God  (Acts 17:25-28), it also is the case that liberty and morality are meaningless without the absolute and objective reality of God.

Whittaker Chambers has been called “the most important 20th century defector from Communism”  (Buckley 79). He has also been called the “most influential” writer to impact the thinking of the 40th President of the United States—Ronald Wilson Reagan  (Kengor 76).  It was Chambers’ memoir, Witness, that held such high estimation in Reagan’s mind that he is reported to have kept copies of it on the bookshelves at all of his places of residence. Concerning  freedom, Chambers wrote the following passage that was one of many from him that exercised remarkable influence on President Reagan:

. . . God alone is the inciter and guarantor of freedom.  He is the only guarantor. . . . Political freedom as the Western world has known it, is only a political reading of the Bible. . . . Religion and freedom are indivisible.

. . . There has never been a society or a nation without God.  But history is cluttered with the wreckage of nations that became indifferent to God, and died.

Faith in God, for the Founders of America, was “not a threat to civil society but rather vital to the survival” of that society and its freedom (Levin 34).  This is why it is the case, that attacks on faith in God, are attacks on the existence of civil society, and the liberty or freedom of its citizens.  “On our knees” is the protector of freedom.  A nation that becomes indifferent to God and prayer will eventually collapse.

THE PERCEPTION OF DEITY

The Bible affirms,   “ . . . The invisible things of God, since the creation of the world are clearly seen, being  perceived through the things that are made, even His everlasting power and divinity, that they may be without excuse:  Because that, knowing God, they glorified Him not as God neither gave thanks; but became vain in their reasonings.”  (Romans 1:20)

Through the perception of empirical facts  (i.e. “things that are made”)  we can also perce   The word perceived (or understood) in the text of  Romans 1:20,  is translated from a form of the Greek word noeo which involves “a purely intellectual process, ‘attentive thought which takes note of what is seen and, by means of which the observer apprehends  before him’    It is the result of “rational reflection or inner contemplation”

“The invisible is seen as something recognized.  Knowledge of the infinite God is reached through the finite order”  The writer Varghese, summarized it well when he wrote:  “This is a perception rooted as much in common sense, as in a fundamental insight, that the existence of finite being is . . . unintelligible without . . . an infinite Being”.

The perception of the reality of God, through “the things that are made” should have caused them,  and us, to glorify God and be thankful.  “Let us come before His presence with thanksgiving. . . . Oh come let us worship and bow down;  Let us kneel before the Lord, our Maker!”  Psalm 95:2, 6).  “On our knees” should be the result of the perception of Deity from “the things that are made”  (Psalm 95:3-5).

Following the Union victory in what remains arguably the bloodiest battle of the Civil War—Gettysburg—Abraham Lincoln confided in General Daniel Sickles with the following:  “I went into my room and got down on my knees in prayer.  Never before had I prayed with as much earnestness. . . . I felt I must put all my trust in Almighty God . . . the burden was more than I could bear”

There is the sense in which prayer and thanksgiving should be activated regularly and continually in our lives. The Bible says, “Pray without ceasing, give thanks in all circumstances, for this is the will of God . . .”  (1 Thessalonians 5:17-18).  Jesus taught that we “ought always to pray and not lose heart”  (Luke 18:1).  Paul exhorted the Christians in the church at Ephesus to be “praying at all times . . . with all perseverance”  (Ephesians 6:18).  Again,  “Do not be anxious about anything, but in everything by prayer . . . with thanksgiving let your requests be made known to God”  (Philippians 4:6).

However, is it not the case that there are signal moments in life when it may be more obvious to us that we need to be “on our knees” in prayer?  Could it be that the Thanksgiving season of 2020  is one of those more obvious times?  “On our knees” exemplifying the posture of identity as creatures made in the image of God;  “On our knees” protecting our God-given freedom and liberty;  “On our knees” affirming our perception of Deity—all  “for such a time as this”  (Esther 4:14).

On Your Knees, America!