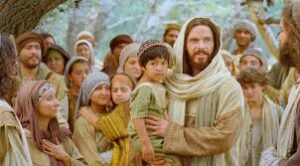 Blessed be the “Little Ones”

I’m going to be reading several verses of scripture today, and all of them except the first one, will contain the words of Jesus.

A few weeks ago we talked about the idea of guardian angels.  Some people believe that each one of us has a guardian angel sent to protect and to serve us.  While others don’t believe in specific so called “guardian angels”.   But most people who know the bible even fairly well, are familiar with  Hebrews 1, verse 14  which speaks of angels, and says;  “Are they not all ministering spirits, sent forth to minister for them who shall be heirs of salvation?”   And of course that’s a rhetorical question, meaning that it requires no answer, because the answer is built into the question.  The answer is..  YES OF COURSE,  all angels are ministering spirits.  And they are sent by God, to minister, or in other words, to serve, those who will inherit salvation.  And of course those who will inherit salvation, are Christians..  Faithful Christians.

And so that verse reveals to us at least ONE of the duties, and purposes of angels.  They minister to the needs of Christians.  But we’re not told exactly HOW those angels minister to Christians.  Do they at times protect us from physical harm?  Do they sometimes protect us from spiritual harm?  How exactly do angels serve us?  That’s just one of those things that God doesn’t reveal to us, and so we need to simply accept by faith, that God has indeed provided us with some kind of ministering help, from angels.

But I want to bring your attention to another verse which speaks of angels, and that verse is  Mathew 18, verse 10,  where Jesus says;  “See that you do not look down on one of these little ones;  For I say to you that their angels in heaven continually see the face of My Father who is in heaven.”

Now that verse typically makes a lot of people think that little children have guardian angels.  But of course we need to always keep in mind, that the bible never uses the term “guardian” angels, and so people often want to go a bit beyond exactly what the bible says.  But at any rate, the point is, that the scriptures tell us for sure, that these “little ones” do in fact have angels, who minister to them.  Just like  the verse in  Hebrews tells us that ALL angels are ministering spirits, ministering to faithful Christians.

But all of that is really just a lead-in to what I want to talk about here today.  What I want to ask you to focus on, is the phrase “little ones” from  Mathew 18:10.   Most people automatically think that “little ones” refers to children.  But I believe that when the whole context, the whole account of what Jesus is teaching, we’ll find that the phrase “little ones” doesn’t really refer to children.  But rather, it simply refers to meek and humble believers, who have submitted themselves to Jesus, like little children.

So then let’s go back to the beginning of  Mathew chapter 18,  and I’ll read, beginning with  verse 1.   The scripture says;  “At that time the disciples came to Jesus and asked;  Who then is the greatest in the kingdom of heaven?  And Jesus called a little child unto Him, and set him in the midst of them, and said;  Verily I say unto you, Except ye be converted,  (unless you change your attitude.  Unless you have a change of heart)  and become as little children, ye shall not enter into the kingdom of heaven.”

Now Jesus IS speaking about little children here.  Young, innocent, and humble children.   Jesus says in  verse 4;  “Whosoever therefore shall humble himself as this little child, the same is greatest in the kingdom of heaven.  And whoever receives one such child, in My name, receives Me.”

So Jesus used a little child as an example, to teach His disciples, (and us) a lesson in humility and innocence.  But now in  verse 6,  He makes a slight shift in His wording, and a shift in who He’s talking about.   In  verse 6,  Jesus is going to make an analogy, between those innocent children, and those who believe in Him;  His disciples.    As we know from the scriptures, little children have not yet reached what we call, “the age of accountability”, because they haven’t matured enough, and therefore don’t understand enough, to be true “believers”.

And so now as Jesus continues His teaching, His focus is going to shift from the child that He used as an example a minute ago, to those who ARE old enough, to believe in Him.  And Jesus is now going to use a phrase, that compares these believers, to innocent children.  And so let’s listen to what Jesus says..

“But whoever causes one of these LITTLE ONES, who BELIEVE in Me, to stumble, it would be better for him to have a heavy millstone hung around his neck, and to be drowned in the depth of the sea.”   And so Jesus doesn’t use the word “child” or “children” in this verse, but rather, He uses the phrase “little ones”.   But He goes a step further, and He qualifies these “little ones” as those who “believe in me”.    Jesus is now talking about believers, not young children who are still innocent because of their young age.   But He refers to these believers, as “little ones”, because they have HUMBLED themselves, and they have BECOME like children, by SUBMITTING themselves, to Jesus.

The word translated as “little ones” in this verse, is also used in  Mathew 10, verse 42.   But that verse says nothing about children;  Nor does the context surrounding that verse.  But rather, that verse, and it’s context, speaks specifically of disciples of Christ..  Believers.

Let me read a couple of verses from that passage.   Jesus says, in  Mathew 10:39 thru 42;  “Whoever finds his life will lose it, and whoever loses his life for My sake will find it.  He who receives you, receives Me, and he who receives Me, receives the One who sent Me.  Whoever receives a prophet, because he is a prophet, will receive a prophet’s reward;  And whoever receives a righteous man, because he is a righteous man, will receive a righteous man’s reward.  (and now listen to verse 42)  And if anyone, gives even a cup of cold water, to one of these little ones, because he is My disciple, truly I tell you, he will never lose his reward.”   A “little one”, is a disciple of Christ.

Now let me return to  Mathew 18,  and hear what Jesus has to say about “stumbling”, and one who causes a “little one” to stumble.

And now Jesus gives us an illustration, of the danger of stumbling, and of importance of spiritual life, and of the insignificance of the flesh.  Jesus says in  verses 8 & 9;  “If your hand or your foot causes you to sin, (some versions say, “stumble”) cut it off and throw it away.  It is better for you to enter life crippled or lame than to have two hands and two feet and be thrown into the eternal fire.  If your eye causes you to stumble, (or sin) pluck it out and throw it from you.  It is better for you to enter life with one eye, than to have two eyes and be cast into the fiery hell.”

Woe to anyone, or anything, that causes a believer in Christ, to sin!   That’s what Jesus is saying.  And now here’s  verse 10  again;  This is where we began;  “Take heed, that you despise not, one of these little ones;  (one of these humble believers.  One of these the least)  For I say unto you, That in heaven their angels do always behold the face of my Father which is in heaven.”  ALL believers, have angels in heaven!

The phrase “despise not” is being likened, to causing them to stumble.  “Despise” means to look down upon, and to have contempt for, and to treat with no regard.  And that kind of treatment might indeed cause an immature believer, to stumble and sin!   And so Jesus says in  verse 11;  “For the Son of man is come to SAVE that which was lost!”   Jesus came to this ugly world, and He was crucified, so that we might be forgiven;  And woe to anyone who causes someone who Jesus died for, to sin again!

Here’s how much Jesus cares about each and every one of us;   Verses 12 thru 14;  “What do you think?  If a man has a hundred sheep, and one of them goes astray, will he not leave the ninety-nine on the hills and go out to search for the one that is lost?  And if so be that he find it, verily I say unto you, he rejoices more of that sheep, than of the ninety and nine which went not astray.  Even so, it is not the will of your Father which is in heaven, that one of these little ones (one of these who believe in me) should perish.”

Jesus is talking about believers!  And He continues to talk about believers, in  verses 15 thru 18, when He speaks about bringing an erring brother or sister, back again.  And so He says;  “If your brother sins against you, go and tell him his fault, between you and him alone.  If he listens to you, you have gained your brother.  But if he does not listen, take one or two others along with you, that every charge may be established by the evidence of two or three witnesses.  If he refuses to listen to them, tell it to the church. And if he refuses to listen even to the church, regard him as you would a pagan or a tax collector.”

And so Jesus has begun His teaching, by using a little child, as an example, of what kind of people the kingdom of God is made up of.  And then He draws the comparison between that little child, and the “little ones” who had come to believe in Him.   And he talks about stumbling, He talks about sin.  And He teaches us the value of spiritual life, and the insignificance of the flesh.

And so, will you humble yourself?  Will you submit to Jesus, and obey Him?  Will you be just as humble and trusting, and innocent, as a little child?

Will you hear God’s word?  Will you believe that Jesus is the Christ, the Son of the living God?  Will you confess your faith in Him, and repent of your sins, and be baptized for the forgiveness of those sins, and continue faithful, even unto death?