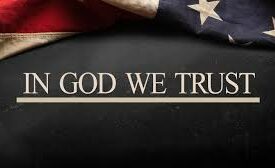 The History of..  In God We Trust

You’re only going to get one verse of scripture tonight, and that will be at the very end of the lesson.  But I think the lesson will be interesting, and maybe informative, and hopefully, profitable anyway.

The motto, IN GOD WE TRUST, was placed on United States coins largely because of the increased religious sentiment existing during the Civil War.  Secretary of the Treasury Salmon P. Chase received many appeals from devout persons throughout the country, urging that the United States recognize the Deity on United States coins.  From Treasury Department records, it appears that the first such appeal came in a letter dated November 13, 1861.  It was written to Secretary Chase by . . . M. R. Watkinson, Minister . . . from Ridleyville, Pennsylvania, and read:

Dear Sir: You are about to submit your annual report to the Congress respecting the affairs of the national finances.

One fact touching our currency has hitherto been seriously overlooked. I mean the recognition of the Almighty God in some form on our coins.

You are probably a Christian. What if our Republic were not shattered beyond reconstruction? Would not the antiquaries of succeeding centuries rightly reason from our past that we were a heathen nation?  What I propose is that instead of the goddess of liberty we shall have next inside the 13 stars a ring inscribed with the words PERPETUAL UNION; within the ring the allseeing eye, crowned with a halo; beneath this eye the American flag, bearing in its field stars equal to the number of the States united; in the folds of the bars the words GOD, LIBERTY, LAW.

This would make a beautiful coin, to which no possible citizen could object. This would relieve us from the ignominy of heathenism. This would place us openly under the Divine protection we have personally claimed. From my hearth I have felt our national shame in disowning God as not the least of our present national disasters.

To you first I address a subject that must be agitated.

As a result, Secretary Chase instructed James Pollock, Director of the Mint at Philadelphia, to prepare a motto, in a letter dated November 20, 1861:

Dear Sir: No nation can be strong except in the strength of God, or safe except in His defense. The trust of our people in God should be declared on our national coins.

You will cause a device to be prepared without unnecessary delay with a motto expressing in the fewest and tersest words possible this national recognition.

It was found that the Act of Congress dated January 18, 1837, prescribed the mottoes and devices that should be placed upon the coins of the United States.  This meant that the mint could make no changes without the enactment of additional legislation by the Congress.  In December 1863, the Director of the Mint submitted designs for new one-cent coin, two-cent coin, and three-cent coin to Secretary Chase for approval.  He proposed that upon the designs either OUR COUNTRY; OUR GOD or GOD, OUR TRUST should appear as a motto on the coins.  In a letter to the Mint Director on December 9, 1863, Secretary Chase stated:

The Congress passed the Act of April 22, 1864.  This legislation changed the composition of the one-cent coin and authorized the minting of the two-cent coin.  The Mint Director was directed to develop the designs for these coins for final approval of the Secretary.  IN GOD WE TRUST first appeared on the 1864 two-cent coin.

Another Act of Congress passed on March 3, 1865.  It allowed the Mint Director, with the Secretary’s approval, to place the motto on all gold and silver coins that “shall admit the inscription thereon.”  Under the Act, the motto was placed on the gold double-eagle coin, the gold eagle coin, and the gold half-eagle coin.  It was also placed on the silver dollar coin, the half-dollar coin and the quarter-dollar coin, and on the nickel three-cent coin beginning in 1866.  Later, Congress passed the Coinage Act of February 12, 1873.  It also said that the Secretary “may cause the motto IN GOD WE TRUST to be inscribed on such coins as shall admit of such motto.”

The use of IN GOD WE TRUST has not been uninterrupted.  The motto disappeared from the five-cent coin in 1883, and did not reappear until production of the Jefferson nickel began in 1938.  Since 1938, all United States coins bear the inscription.  Later, the motto was found missing from the new design of the double-eagle gold coin and the eagle gold coin shortly after they appeared in 1907.  In response to a general demand, Congress ordered it restored, and the Act of May 18, 1908, made it mandatory on all coins upon which it had previously appeared.  IN GOD WE TRUST was not mandatory on the one-cent coin and five-cent coin.  It could be placed on them by the Secretary or the Mint Director with the Secretary’s approval.

Most of our country’s founding fathers, believed in God, and in the bible.  The Declaration of Independence, which was written in 1776, contained four specific references to God.

First there is this statement;  “The laws of nature, and of nature’s God, entitle the United States to independence.”

Next we read this very well known statement;  “All men are endowed by their Creator with certain unalienable rights.”

And then there’s this statement;  “Congress appeals to the Supreme Judge of the world, for the rectitude of our intentions.”

And finally we read;  “The signers, with a firm reliance on the protection of divine Providence, pledge to each other their lives, fortunes, and sacred honor.”

And as we can see from the history of the phrase “In God we Trust” on our currency, that at least through the 1950’s, that same sentiment pretty much was shared by the majority of people in the United States.   I’d venture to say that possibly even through 1976, that sentiment was shared by most Americans.  And so for over 200 years, from 1776, until beyond 1976, this country enjoyed the majority support, for Christianity.  But change was taking place.

We read a few minutes ago that in 1956, the Congress of the United States declared that “In God We Trust” should be considered to be the national motto!   But I’d say that a mere forty four years later, by the year 2000, we had nearly half the people of this country no longer in agreement with that “national motto”.  And now today, another twenty years later, we have seen an actual BAN, of the word God, being used in the government, and in schools, and in I don’t know how many other places.

And our new Congress, has passed a resolution that while speaking in Congress, it’s no longer proper to even use any word that would specify one gender or another!  I don’t know how their even going to hold conversations with each other.  They can’t say father or mother, or son or daughter, or niece or nephew.   They’ve completely lost their minds!

But let me get back to God.  They want “In God We Trust” taken off of our currency!  I suppose they think they can trust in themselves!

Now, you might find it interesting, that although the declaration of Independence, contained multiple references to God, the US Constitution, doesn’t have any references to God.  But I read one man’s explanation for that, and here’s what he said;

“Whereas the Declaration explained and justified a rebellion to secure God-given rights, the Constitution is a blueprint for stable and effective republican government in a free country.  The Preamble to the Constitution declares that its purposes are “to form a more perfect Union, establish Justice, insure domestic Tranquility, provide for the common defense, promote the general Welfare, and secure the Blessings of Liberty.”  These are wholly secular objects; religious references are extraneous in a document drafted to further them.”

So I suppose that makes sense then, and I can understand the omission of any reference to God in the Constitution.

But let me share with you this fact about “constitutions”.   Here’s what I just recently read on this subject..

“Most state constitutions – 34 of them – refer to God more than once.  Of the 116 times the word appears in state constitutions, eight are in the Massachusetts constitution, and New Hampshire and Vermont have six references each.  Perhaps surprisingly, all three of these states are among the least religious in the country today, according to a 2016 Pew Research Center analysis.”

Now listen to this fact..  “A handful of state constitutions explicitly prohibit, those who do NOT believe in God from holding public office. However, these bans have not recently been enforced, because it is generally assumed that they violate the U.S. Constitution’s prohibition, on requiring religious tests for those holding public office.”

But I assume that you’re all aware of the fact that even though the US Constitution prohibits, one’s religious beliefs from becoming a “test” so to speak, for a candidate holding office, it is also a FACT, that the democrats have indeed MADE it a test regardless of what the constitution says!   They haev made it a test, that if you DO believe in Christianity, that you’re not eligible to hold public office!   They have voted against judicial candidates, strictly because of the fact, that they held Christian beliefs!   Black-balled, in the United States, for professing Christianity!

Let’s be reminded of a scripture from the bible.   It’s  Romans 13, verse 1;  “Everyone must submit himself to the governing authorities, for there is no authority except that which is from God.  The authorities that exist, have been appointed by God.”   And if the country that we live in has been appointed by God, then surely as Christians, we have the responsibility to do all we can, to make it a nation that God would be proud of, and that He won’t simply want to destroy, like He’s destroyed so many nations before us.