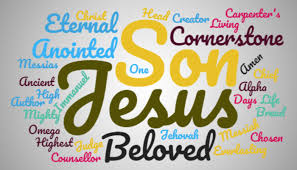 The Names of Jesus

The prophet Isaiah wrote, in  Isaiah 9, verse 6;  “For unto us a child is born, unto us a son is given: and the government shall be upon his shoulder:  And his name shall be called Wonderful, Counsellor, The mighty God, The everlasting Father, The Prince of Peace.”

That verse gives us five names, that God has given for Jesus Christ.  Let’s listen to those names again;  His name shall be called..  Wonderful, and Counsellor, the Prince of Peace, the mighty God, and listen to this last one;  The everlasting Father.   “For unto us a child is born, unto us a Son is given..  And His name shall be called the everlasting Father!   Other versions say;  “The eternal Father”.

Are you surprised at that name?  The Son, shall be called “the everlasting Father”, the “eternal Father”!    Try to remember that, the next time someone tells you how “distinctively different” the Father and the Son are.  The Son shall be called the mighty God, the eternal Father.

But my subject isn’t about the “Oneness of the Father and the Son, but it’s about the names that the bible has given to Jesus the Christ.   And of course, “the Christ” is one of those names.   Mathew 16:16  says;  “Thou art the Christ, the Son of the living God.”

While that one verse in Isaiah, gives five different names for Jesus, the book of Mathew actually gives at least 35 different names and designations for our Lord Jesus.  The name “Lord”, being one of them.  And as I said, some of them aren’t specific names, but rather, are designations, referring to Jesus.

Let me read to you these 35 names and designations that are used in the book of Mathew.  And these are words and names, in the order that they appear, beginning with  Mathew 1, verse 1.   And here’s the names..

Jesus Christ, Son of David, Son of Abraham.  That was all in  verse 1.

Then, the names Christ, Son, Jesus, and Immanuel.  Those are all in  Chapter 1.

Then in  Chapter 2;  King of the Jews, Ruler, Child, Nazarene.

Chapter 3;  Lord, and My beloved Son.

Chapter 12;  The Lord of the Sabbath, servant, and My beloved.

Chapter 21;   King, Prophet, Jesus of Nazareth, a Stone, and the Chief Cornerstone.

And in  Chapter 27,  Jesus is called, the King of Israel.

You’ll remember that Isaiah said;  “His name shall be called Wonderful..”   Here’s what Alexander Campbell wrote about that name Wonderful..

The Savior’s inspired names all have a meaning. Each one of them designates some peculiar characteristic, or office, or work of the Messiah. Since this is the case, we may expect that some great truth underlies the names, which the evangelical prophet gives to the Redeemer.
“His name shall be called Wonderful.”  There are many obvious reasons for this name. Passing by all others, there is one which seems to have especial weight. Jesus is called Wonderful, on account of the strange contrasts, and wide extremes, seen in him, and in his history—contrasts and extremes which appear to be direct contradictions.

There are extremes in the Savior’s names. On one page of inspiration he is called the “man Christ Jesus;” on the next he is called “our Lord and Savior Jesus Christ.” At one time he calls himself “the Son of Man;” at another time, “the Son of God.” We are told he is “the child born, the son given;” and yet with the same breath we are told that he is “the Mighty God, the Everlasting Father, the Prince of Peace.” He is Jehovah, God over all, and blessed forever, and yet he is a servant of servants. He is the same yesterday, to-day, and forever, the ever living and ever unchanging one, and yet he is the crucified and buried Redeemer. If Jesus is appropriately called by all these diverse names, He must (indeed) be Wonderful!

Two authors, named Hurlburt and Horton, wrote a  book called..  The Wonderful Names of Our Wonderful Lord, in which they discuss 365 such names and titles, for the Lord Jesus Christ.   In the work titled  The Names of Jesus, and author named Towns, lists 675 names and titles of Jesus Christ with the accompanying Scripture reference for each.   Now I’m sure that many of those are simply variations of one another, but that’s still an amazing fact of the scriptures.  That there are so many designations, given to the One called Jesus.

Someone wrote that there are at least five different areas of designation, which all the various names of Jesus can be categorized into.  And these areas of designations are.. (1) salvation. (2) deification. (3) coronation, (4) anticipation and (5) instruction.  There is a sense, in which each name, can be classified as being more closely connected to one area of designation, above the others.

For example;  The most commonly used name in the bible, for our Lord, is Jesus.  But many times the name Jesus is used in combination with other names, such as Jesus the Christ, Jesus Christ the Son of the living God, and Jesus the prophet, and Jesus, king of the Jews.

The Greek word from which the English word Jesus is derived is Iesous, and it is equivalent to the Hebrew Yesua, from which we get Joshua.  “Jesus. the Greek form of ‘Joshua,’ means.. “God saves” (2). The name Jesus was once a common and popular name among the Jews in the Greek world, but its usage became rare near the end of the first century (Stevenson 111-12). The name became unique to One Person (i.e. Jesus from Nazareth of Galilee).

Matthew tells su that the name Jesus was pre-determined by Divine will, to be the name of the Messiah King. An angel of the Lord spoke to Joseph, the husband of Mary, of whom Jesus was born, and the angel commanded Joseph to give the baby the name Jesus. Matthew reported the angel’s words as follows:  “. . . And she will bring forth a Son, and you shall call His name JESUS, for He will save His people from their sins”  (Matthew 1:21).  Mary gave birth to the Child, Joseph was obedient to the heavenly instruction and  “. . . He called His name JESUS”  (Matthew 1:25).

The name Jesus, wonderfully and powerfully, evidences that He is savior.  One commentator said;  “That the meaning of the name was thoroughly well known at this period, is attested to by the Alexandrian Jewish exegete and philosopher of religion, Philo, when he interprets Joshua’s name in Greek as;  Iesous soteria Kyrion,   which translated means;  JESUS, MEANS SALVATION THROUGH THE LORD”

Jesus means Savior, but He is Savior, because He is Deity. He is the DIVINE King.  Among the names, titles used for Jesus, are those designations that relate to His deification (i.e. His glorification as God). One such designations, is the name, Immanuel  (Mathew 1:23).   Concerning Immanuel, Matthew affirmed that the birth of Jesus was a fulfillment of the prophecy of Isaiah that said,  “Behold a virgin shall be with child, and bear a Son, and they shall call His name Immanuel,’ which is translated, ‘God with us”  (again, Matthew 1:23).  Immanuel is the term of incarnation. God came in the flesh to be with man  (John 1:14).  There is great significance, in the name Immanuel, as well as in the name Jesus.

In s discussion of the designation, Son of God, and its related titles (i.e. Son, My Beloved Son, Son of the living God), the commentator Warfield says, that in some respects, “the most remarkable” utterance “in the whole compass of the four Gospels” is  Matthew 11:25-27.   Here Jesus says:  “I thank You, Father, Lord of heaven and earth, because You have hidden these things from the wise and prudent and have revealed them to babes. . . . All things have been delivered to Me by My Father, and no one knows the Son except the Father.  Nor does anyone know the Father except the Son, and he to whom the Son wills to reveal Him”

Likewise, as Warfield says this:  The Son can be known only by the Father, in all that He is, as if His being were infinite, and as such inscrutable to the finite intelligence;  And His knowledge alone—again as if He were infinite in His attributes—is competent to compass the depths of the Father’s infinite being.  HE WHO HOLDS THIS RELATION TO THE FATHER CANNOT CONCEIVABLY BE A CREATURE, created by God, but rather, God Himself!

Although the phrase “son of man” occurs frequently in the Old Testament (i.e. Psalms 8:4; 80:17; Ezekiel: 90 times), however, it is believed that the primary source, for the Messianic designation Son of Man, is the following passage from the prophet Daniel, in  Daniel 7, verses 13 & 14;

“I was watching in the night visions, and behold, One like the Son of Man, coming with the clouds of heaven! He came to the Ancient of Days, and they brought Him near before Him. Then to Him was given dominion and glory and a kingdom that all peoples, nations, and languages should serve Him. His dominion is an everlasting dominion, which shall not pass away, And His kingdom the one which shall not pass away.”

In light of the contextual flow of New Testament Messianic teaching, it seems rather obvious that the above passage is a clear reference to the ascension, coronation, and exaltation of King Jesus. With the theme—The King and His Kingdom—Matthew contains information that is closely connected to the kingdom, and rule of the Son of Man, from the Daniel passage.  The high priest, before whom Jesus appeared in trial and judgment, demanded,  “I adjure You by the living God that you tell us if You are the Christ, the son of God”  (Matthew 26:63). Jesus answered,  “It is as you said.  (in other words, YES, I am the Christ, the Son of God!)  “Nevertheless, I say to you, hereafter you will see the Son of Man sitting at the right hand of the Power, and coming on the clouds of heaven”  (Matthew 26:64).  Jesus said;  “The Son of Man”, is the King on His throne, and will apportion to men their eternal destinies.  (Matthew 25:31-46).

Although both the deity and majesty of Matthew’s King are manifested in the designation Son of Man, there is also another important aspect to this favorite expression of Jesus.  A commentator named Stalker, eloquently summarized it when he stated:

. . .The figure in Daniel, being of heavenly origin, and engaged in high and solemn fellowship with the Ancient of Days . . . would correspond with His consciousness of pre-existence.   The name [Son of Man] suited His purpose of concealing His messianic claims, while it expressed them to Himself, and hinted them to His disciples.

But, it seems to me, the deepest reason for His choice of this name, must have been the admirable expression which it gives to His connection with the human race.  That the sense of His identity with all mankind, was one of His master-sentiments, requires no demonstration. With whatever is high and noble in man’s nature or destiny, He was in intimate sympathy;  And His compassion reached down to everything that is painful or pathetic in the human lot.  HE IS THE BROTHER OF ALL, THE MAN OF MEN. This is  ONE OF THE TWO POLES ON WHICH HIS MESSIAHSHIP RESTS. WITHOUT THIS CONNEXION WITH THE RACE, AND THIS UNIVERSALITY OF SYMPATHY , HE COULD NOT HAVE BEEN THE MESSIAH.