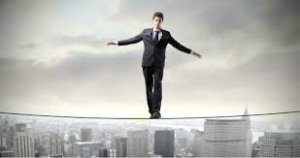 One of the questions that I received here on the website was, “How do we balance our repentance with the level of our sin?”

I’m sure the thought behind that question was that if you have sinned a lot, you must repent a lot.  And vice-versa;  If we only sin a little, we only need to repent a little.    And so the question is, “How do we know if we’ve repented enough for the level of our sin?”

This kind of thinking does indeed make sin and repentance a “balancing act”.   But I know that’s not the way God wants us to view sin and repentance.  And the reason I know that, is because of what God’s word says.  Repentance isn’t a “balancing act”, but rather it’s a desire to stop sinning, and a decision to stop sinning.  Without having the desire in our hearts, and without being willing to make that decisive commitment, to completely TURN from our sin, there IS no forgiveness!

We can’t fool God can we?  We can fool ourselves, but we can’t fool God.   Galatians 6, verse 7  tells us;  “Do not be deceived, God is not mocked.  For whatever a man might sow, that also he will reap.”   Unless we’ve made that commitment in our heart, we’re only deceiving ourselves to think that we’ve been forgiven.

But man tends to “categorize” sin, thinking this sin is worse than that sin, and so they think some sins require more repentance than others.  But God doesn’t view one sin as being any worse than another.  As a matter of fact, the bible says, “For whoever keeps the whole law, and yet stumbles in one point, he has become guilty of all.”   (James 2:10)

And of course that doesn’t mean that just because we broke one law, that we’ve broken each and every law that exists.  But what it means is that by breaking ANY of the laws of the covenant, we have broken the covenant!   It doesn’t matter which specific law that you’ve broken, you’re guilty of breaking the covenant.

That’s a fact that most people either don’t know or don’t want to acknowledge.  Most people want there to be a little more “leyway” without feeling so guilty.  But God’s word is what it is.  If we stumble in even one point, we are guilty of all!”  Well then it’s easy to see how “we all fall short of the glory of God”.   (Rom 3:23)

Now there’s no doubt that some people sin more often than others, simply because many people don’t care if they sin.  And many might care, but they don’t want to restrict themselves from what they might consider to be, “the fun things” of this life, even though the bible might condemn those things.  But it really doesn’t matter “how much” we’ve sinned.  The fact of the matter is,  “For all have sinned and fall short of the glory of God.”   (Romans 3:23)  And we all need the forgiveness of God!  And the “good news” is, that thanks be to God, that,  “The grace of God has appeared bringing salvation to ALL men.”   (Titus 2:11)

Why Does God Give Laws ?

I’m going to start by reading  Romans 5:20,   “And the Law came in, that the transgression might increase, but where sin increased, grace abounded all the more.”  (sin and transgression are the same thing)

So God gave Law, so that sin could increase?  Interesting verse, isn’t it?

It says in  Romans 5:13,   “..But sin is not IMPUTED when there is no law.”  It’s not that people weren’t sinning before the law came, it’s just that before God gave a LAW, people didn’t KNOW that they were sinning.

But listen to what God says about salvation from sin..  God says in  Galatians 3:16,   “Now the promises were spoken to Abraham and to his seed.  He does not say;  And to seeds, as referring to many, but rather to ONE; And to YOUR seed, that is Christ!”  God told Abraham, in  Genesis 12:3,  “..And in YOU, all the families of the earth shall be blessed.”   So in Abraham’s seed, (in his offspring) salvation would be offered to ALL the families of the earth.  Not just to one nationality, but to all families!  And Christ IS that “seed of Abraham” in whom salvation is offered to everyone.

Now, in  Galatians 3, verse 17,   God is going to make a contrast, between this promise of salvation, and the Law of Moses.   Here’s what God says;  “What I am saying is this;  The Law, which came 430 years LATER, (later than the promise, After the promise) does not invalidate a covenant previously ratified by God, so as to nullify the promise.”    So God is saying that salvation is NOT according to the Law of Moses, and it never was!  It has ALWAYS been the result of a “promise”, which is conditional upon FAITH in God’s word, and on our OBEDIENCE to that faith.  It’s interesting though to notice, that there were actually two covenants in force at the same time.  One covenant was the covenant of promise, that was given to Abraham, and to his offspring, (which includes all those who would become sons of Abraham through faith in Christ) and the other covenant was the one given specifically to the nation of Israel, Abraham’s physical offspring.

Here’s  Galatians 3, verse 18,   “For if the inheritance is based on Law, it is no longer based on a promise!  But God has granted it to Abraham by means of a PROMISE.”   That’s pretty easy to understand isn’t it?  Salvation is a promise, given to all those who are of the same kind of FAITH, as Abraham was.  Namely, a faith that OBEYS the instructions of God.   “By FAITH, Abraham OBEYED..”   (Hebrews 11:8)    “By FAITH, Abraham OFFERED up Isaac..”   (Hebrews 11:17)

Why was the sin of Adam and Eve “imputed” against them?  Obviously because God had given Adam a law,  “But of the tree of the knowledge of good and evil, YOU SHALL NOT EAT!”  That was a “Law”!    Gen 2:17

Laws were given so that we would know our sin, and so that we could have the opportunity to repent of our sin.   Galatians 3:19  asked;  “Why the Law then?  And the answer is..   “It was added because of transgressions, having been ordained through angels by the agency of a mediator, until the Seed would come, to whom the promise had been made.”   And of course as  verse 16  had said;  Jesus Christ was that seed of Abraham, to whom the promise had been made.

Repentance needs to characterize our lives, just like faith and obedience needs to characterize our lives.   Repentance, a change of mind, that results in a change of behavior.   A turning from sin, and a turning to God.  Not a part way turning, but a full turn around.  Not a balancing act, so much turning, for so much sin.  But a full turn, a full change, a full decision.  We want full forgiveness, don’t we?  We don’t just want to be partially forgiven.  We want to be fully forgiven.  And that’s exactly what God promises us!

John wrote in  1 John 1, verse 9;  “If we confess our sins, He is faithful and just to forgive us our sins, and to cleanse us from ALL unrighteousness.”

Actually, there are three things that are “balanced out” in God’s word.  First, we’re “completely sinful”, because “if we stumble in one point, we’re guilty of all!”   (James 2:10)   Second,  We are “completely forgiven” when we repent of our sins.   “..He is faithful and just to forgive us our sins, and to cleanse us from ALL unrighteousness.”   And third,  our “faith is completed” when we have believed and obeyed God’s word.  “And as a result of the works (works of obedience) faith was completed”   (James 2:22)

Only God can complete this “balancing act”, through Jesus Christ.  His word makes it clear, what we need to do, to balance our sin with His forgiveness.  Believe His word, obey His commands, and completely turn FROM the world, and turn TO God.

“Do not be conformed to this world, but be transformed by the renewing of your mind. Then you will be able to test and approve what is the good, pleasing, and perfect will of God.”  (Romans 12, verse 2)

“Now, if we have DIED with Christ, we believe that we shall also LIVE with Him.  Knowing that Christ, having been raised from the dead, is never to die again; death no longer is master over Him.  For the death that He died, He died to sin, once for all; but the life that He lives, He lives to God!  Even so, consider yourselves to be dead to sin, but alive to God, in Christ Jesus.  Therefore, do not let sin reign in your mortal body, that you should obey it’s lusts!  And do not go on presenting the members of your body to sin, as instruments of unrighteousness, but present yourselves to God, as those alive from the dead, and your members as instruments of righteousness to God.”   (Romans 6:8-13)