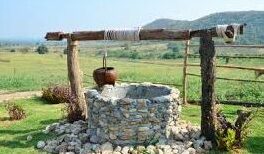 Jesus is a Well of Living Water

I’d like to read to you from  John chapter 4,  and I’ll begin with  verse 1;  “When therefore the Lord knew how the Pharisees had heard that Jesus made and baptized more disciples than John,  (Though Jesus himself baptized not, but his disciples,) He left Judaea, and departed again into Galilee.  And He had to pass through Samaria.  So He came to a city of Samaria called Sychar, near the parcel of ground that Jacob gave to his son Joseph;  And Jacob’s well was there. So Jesus, tired from His journey, was just sitting by the well.  It was about the sixth hour.”  (It was about noon)

“There came a woman of Samaria to draw water.  Jesus said to her;  Give Me a drink.  (For His disciples had gone away into the city to buy food)  Therefore the Samaritan woman said to Him;  How is it that You, being a Jew, ask me for a drink since I am a Samaritan woman? (For Jews have no dealings with Samaritans.)  Jesus answered and said to her;  If you knew the gift of God, and who it is who says to you, ‘Give Me a drink,’  you would have asked Him, and He would have given you living water.”   (Jesus kind of ignored her statement about Jew and Samaritan didn’t He?  To bad more people can’t ignore things like that)

“She said to Him;  Sir, You have nothing to draw with and the well is deep;  Where then do You get that living water?  Are You greater than our father Jacob, who gave us this well, and drank from it himself, as did his sons and his livestock?  (Have you got some water that’s better than the water in this well?)   Jesus answered and said to her; Everyone who drinks of this water will thirst again;  But whoever drinks of the water that I will give him, shall never thirst;  But the water that I will give him, will become in him a well of water, springing up to eternal life.”

The water of Jacob’s well, along with every other well with good water, will keep a person alive for a few days, won’t it?  Maybe four days, isn’t that about how long you can go without getting more water?   You might say that good pure drinking water has certain qualities.  And of course those qualities are beneficial to our bodies, and they keep our bodies healthy, and functioning, and they keep us alive, for a little while.  But then those qualities get used up, and they need to be replenished, and you’ve got to go back to that well again, for more water.  And then in a few more days, it’s back to the well.

Some of our bibles will use the word “everlasting”, instead of the word “eternal”.  Or you could even use the term “never ending”.   Isn’t that what “eternal” means?  “Everlasting” and “never ending”.   But the phrase “eternal life” or “everlasting life”, is really talking about the character or quality of that life.  It’s life that will last throughout the ages.  And it’s really being contrasted with this life that we live right now, which is so brief and fleeting.  Christ came to give us life, that will last though the ages of time, and even beyond!   It’s truly “eternal”.

“But whoever drinks of the water that I will give him, shall never thirst;  But the water that I will give him, will become in him a well of water, springing up to eternal life.”   That’s the character and quality that we want, isn’t it?    And so, the Samaritan woman was in a quandary, she was perplexed;  And so she asked;  “Where then do You get that living water?  Are You greater than our father Jacob, who gave us this well, and drank from it himself, as did his sons and his livestock?”

Well, needless to say, Jesus is indeed greater than Jacob.  Even though Jacob was kind of exalted by God, name was changed to Israel, and his offspring was made to be a great nation.   Yet all Jacob was able to give, was the water that was at the bottom of that well that Jesus and the Samaritan woman stood by.

Remember what we’re told in  1 Corinthians 10, verses 3 & 4?   Paul was writing about the Israelites in the wilderness.  And he said;  “They all ate the same spiritual food, and drank the same spiritual drink;  For they drank from the spiritual rock that accompanied them, and that rock was Christ.”

Do you remember when Moses provided water for the whole congregation of Israel, out there in the wilderness?   Here’s what we read in  Numbers 20, verses 10 thru 13;  “Then Moses and Aaron gathered the assembly in front of the rock, and Moses said to them;  Listen now, you rebels, must we bring you water out of this rock?    Moses was getting pretty “puffed up” wasn’t he?   “..must WE bring you water out of this rock?”   As if it was Moses or Aaron who was supplying the water.   And so the scripture says;  “Then Moses raised his hand and struck the rock twice with his staff, so that a great amount of water gushed out, and the congregation and their livestock were able to drink.”

“But the LORD said to Moses and Aaron, “Because you have not believed Me, to treat Me as holy in the sight of the sons of Israel, therefore you shall not bring this assembly into the land which I have given them.”   How did Moses not “believe” God?   Well, he basically went beyond the word of God, didn’t he?   God had told Moses, in  verse 8;  “Take the staff; and you and your brother Aaron assemble the congregation, and SPEAK to the rock before their eyes, that it shall yield its water.  So you shall bring water for them out of the rock, and have the congregation and their livestock drink.”

But that’s not what Moses and Aaron did.  No, they didn’t speak any words at all to the rock.   Moses spoke to the people of Israel, but he didn’t speak to the rock.  He disobeyed God, and he went beyond what God had told him to do, and God said that Moses didn’t “believe”.   And so once again, we see it illustrated in the bible, that disobedience, is unbelief!   Exactly like we’re told in  Hebrews 3: 18 & 19.

The people of Israel couldn’t enter the promise land because of their disobedience (Heb 3;18)  And  verse 19  says;  “So we see that they were not able to enter because of unbelief.”   And that’s exactly what kept Moses himself out of the promised land.

But that was evidently quite a rock, that gushed out enough water to fill the needs of all the people of Israel, AND their livestock!   That must have been an absolute “flood” of water!  But no matter how special that rock was was, it was just a rock, in one specific location, out there in the wilderness.  It was God who made it gush forth with that water.  But yet I have to imagine that the water that God brought forth from that rock, was just like the water of Jacob’s well.   It was physical water, and it’s “quality” was short lived.

In  Revelation, we’re given a picture of a river, of water of life.    Revelation 22, verse 1,  says;  “Then he showed me a river of the water of life, clear as crystal, proceeding from the throne of God and of the Lamb.”    That kind of reminds me of the words of  John 15:26,  where Jesus said;  “But when the Helper comes, whom I shall send to you from the Father, the Spirit of truth, who proceeds from the Father, He will testify of Me.”

When Moses struck the rock out in the wilderness, he disobeyed God.  And he paid the consequence;  Moses wasn’t permitted to enter the promised land.  So then, the moral of the story is..  If you want to enter God’s promised land, don’t strike the rock.  Don’t disobey God.  Just talk to God the Father, and pray for the water that Jesus gives, to become a well of water within you, springing up unto eternal life.