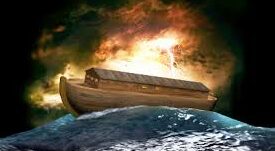 When Did Miracles Occur ?

In last week’s lesson on miracles, I pointed out that miracles have never been an every day occurrence.  And as a matter of fact, there have only been specific periods of time, when any miracles did occur.  And last week I talked about the very beginning of time, when the first miracles occurred, during the creation.

And I also mentioned that after those six days of creation, the scriptures don’t speak of another miracle occurring, for another 987 years.  And the scriptures don’t give much of a description of the event, but rather, there’s just one verse that mentions it.  And that verse is  Genesis 5, verse 24,  and it speaks of a man named Enoch.

But when God took Enoch, that was no everyday, “act of nature” was it?  No, that was God Himself stepping in, and taking Enoch, miraculously.  You might say that Enoch was “raptured”.  He was snatched up off this earth, and never experienced what we might call, a “natural death”.  But rather, God simply “took him”.  The scriptures don’t tell us exactly HOW it happened, but simply that it did happen.

Was Enoch taken up in such a dramatic fashion?  Or did he simply disappear one day?   We don’t know.  But we do know that God’s hand, intervened in the life of Enoch, and God took him, 987 years after the creation.

Do you remember my lesson on the ages of the patriarchs, and how their lives were so long, and how a lot of the patriarchs were contemporary with one another, even though they may have been born centuries apart.  Well, Adam and Enoch were contemporaries for 308 years, before Adam died.  And Adam only missed the departure of Enoch, by 57 years.  But when I think about miracles, and when they occurred, I don’t know if Adam ever did witness a miracle.  Unless you could say that he “witnessed” his own creation, or maybe the creation of Eve.  But anyhow, that’s pretty interesting.

But 1656 years after the creation of the world, when Noah was 600 years old, God deemed it necessary to perform a miracle.  And we might even say that a succession of miracles occurred.  We’re told in  Genesis 6, verses 5 & 6;  “The LORD saw that the wickedness of man was great in the earth, and that every intention of the thoughts of his heart, was only evil continually.  And the LORD “consoled Himself”  that He had made man on the earth, and it grieved Him to His heart.”

Did you notice that I used two words there in  verse 6  that you’re typically not used to hearing?  The Lord “consoled Himself”.  You’re probably familiar with the KJ version, which says..  “It REPENTED the Lord, that He had made man on the earth.”  To “repent”, means to change your mind.  And so the meaning would be, that God changed His mind about creating man, that He was evidently “sorry” that He’d done that, and that He wished He hadn’t made man to begin with.

1 Peter 1:19  says that Christ was..  “..foreordained before the foundation of the world..”   Ephesians 3;11  says;  “This was in accordance with the eternal purpose which He carried out in Christ Jesus our Lord.”   And  Ephesians 2:10  says;  “For we are His workmanship, created in Christ Jesus for good works, which God prepared beforehand, (before the creation) that we should walk in them.”  So then before God even created man, He created and ordained His plan of salvation for man.

So then are we to accurately conclude, that when God viewed the wickedness of man, that He was then “sorry” that He had ever come up with this eternal plan?  Should we think that God “changed His mind”, as if it were a big mistake to create mankind?

Or does it sound a bit more reasonable, to think that maybe the words “repented” and “regretted”, are not the very best words to use, to help us understand the mind and heart of God?  I think that’s a much more reasonable conclusion.  Maybe that verse could be better translated, than the way we’re used to seeing and hearing it.

Once again, here’s the way I originally read that verse to you, just a couple of minutes ago..  I’ll just go ahead and read both verses,  Genesis 6, verses 5 & 6;  “The LORD saw that the wickedness of man was great in the earth, and that every intention of the thoughts of his heart, was only evil continually.  And the LORD “consoled Himself”  that He had made man on the earth, and it grieved Him to His heart.”   Do you know what goes hand in hand, with grieving?  Consolation does, to ease the grief.

I am suggesting to you, in all reasonableness, that God was not “sorry” over His eternal plan for mankind.  God obviously knew “from eternity” what man’s conduct would be at this point in time, as well as man’s conduct throughout ALL time!

And so there was no need for repentance, and no need for any regrets;  But what there was need for, was some consolation.  And don’t think that I’m just grasping at thin air with the word “consolation”.  Because I want you to listen to the meaning, of the original ancient Hebrew word, from the old testament writings..

The word is..  “way-yin-na-hem”, which means.. “to feel sorry”, (or sorrowful) or “to console oneself”, or to “comfort oneself”.   In  Genesis 24, verse 67,  the word is translated “comforted”.   The verse speaks of Isaac, after his mother Sarah had died.  And here’s how that verse reads;  “Then Isaac brought Rebekah, into the tent of Sarah his mother, and he took Rebekah, and she became his wife, and he loved her.  So Isaac was COMFORTED after his mother’s death.”

Here’s what  Genesis 38:12  says;  “And in the process of time, Judah’s wife, the daughter of Shua, died;  And Judah was COMFORTED..”  Some versions say..  “After the period of grieving”, which lets us know WHEN the comforting came.  But the point is..  “Judah was comforted.”

And that’s exactly what God did, before He brought the flood upon the earth;  He comforted Himself, probably with the knowledge of His own eternal plan for mankind.  And with the knowledge, that this was what needed to happen, at this point of time.  Did God feel sorrowful that it had to be this way?  I’m sure that He did.  But did the Lord repent, and change His mind over creating man?  Surely NOT!  Did he “regret” this part of His eternal plan?  Surely NOT!

But now let’s get back to the miracle that occurred 1656 years after creation.  “The LORD saw that the wickedness of man was great in the earth, and that every intention of the thoughts of his heart, was only evil continually.”  And so God Himself decided to step in, and intervene in all that wickedness, in a pretty dramatic, and spectacular way;  because as we know, this was all a part, of the eternal plan.

(The way the world is going right now, It kind of makes you wonder if it’s not time to intervene again.  But that’s another topic.)

But you know what’s interesting, about the miraculous events that Noah witnessed, and was a part of?  What’s interesting is how God used “nature” to bring about all the miracles that occurred during that time.  But still, I’d have to say, that it was all quite “miraculous”.

Was the coming of all the animals, and of every creature that creeps on the ground, two by two, to load into the ark, a miracle?  I don’t know for sure;  You can decide.  How about when God Himself, closed the door of the ark, behind Noah and his family;  Was that a miracle?  And how about the rains that fell for forty days and nights?  Surely the laws of nature, were, shall we say, “manipulated” a bit.   What about the “fountains of the deep” opening up, and gushing forth the water that helped flood the earth?  Was that a miracle?  It hadn’t ever happened before!   Nor had all that rain ever happened before.

You know, I don’t know if it had ever rained before, or not.  We’re told in  Genesis 2, verses 5 & 6,  in the very beginning of time..  “Now no shrub of the field was yet in the earth, and no plant of the field had yet sprouted, for the LORD God had not sent rain upon the earth, and there was no man to cultivate the ground.  But there went up a mist from the earth, and watered the whole face of the ground.”

That so called “mist” that watered the earth, was that the morning dew?  I don’t know.  But God did water the earth.  And then God did create a man to cultivate the fields.  Genesis 2, verse 7  says;  “Then the LORD God formed man from the dust of the ground and breathed the breath of life into his nostrils, and the man became a living being. ( a living soul)

And God did cause all the plants and trees to grow.  Genesis 2, verses 8 thru 10  tells us;  “The LORD God planted a garden toward the east, in Eden; And there He placed the man, whom He had formed.  And out of the ground, the LORD God made to spring up every tree that is pleasant to the sight, and good for food.  The tree of life was in the midst of the garden, and the tree of the knowledge of good and evil.  And a river went out of Eden to water the garden;  And from thence it was parted, and became into four heads.”

Genesis 7, verse 11  says;  “In the six hundredth year of Noah’s life, in the second month, on the seventeenth day of the month, on that day all the fountains of the great deep burst forth, and the windows of the heavens were opened.”  Sounds like a miracle!

Was it a miracle, that Noah and his family, and all the animals, survived on the ark, and evidently remained perfectly healthy, for over a year’s time.  Was it a miracle that the ark itself, survived the torrential downpouring and flooding?  I don’t know that Noah was any “master ark builder”, but that must have been quite the ark!   Do you thinking the cruise ships of today could sustain that kind of pounding, for forty days and forty nights?  I wonder.

We don’t know if Noah was a “master ship builder”, but we do know that Noah “found favor in the sight of Jehovah”   (Genesis 6, verse 8)   And it was that “favor” that “grace of God” that saw Noah and all the others through.  I think we could say..  It was the providence of God, being manifested miraculously, through the means of nature.   1 Peter 3:20  puts it this way..  “..when once the longsuffering of God waited, in the days of Noah, while the ark was being prepared, wherein few, that is, eight souls, were saved by water.”

“Saved by water”!   Sound familiar?  It should.  Because  1 Peter 3:21 & 22  says;  “Corresponding to that, (corresponding to Noah being “saved by water”) baptism now saves you!  Not the removal of dirt from the flesh, but an appeal to God for a good conscience, through the resurrection of Jesus Christ, who has gone into heaven and is at the right hand of God, with angels, authorities, and powers subject to Him.”

Water alone didn’t “save” Noah and his family;  But when Noah decided to obey the command of God, and get into that ark, water was the means, by which Noah was saved from destruction.  I’m sure you’ve heard the saying..  “whatever floats your boat”.  Well, water definitely “floated the boat” that Noah was in.  And corresponding to that, water “floats the boat of salvation” today, for all will obey the commands of God.