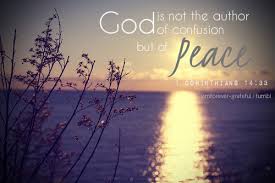 God is not the Author of Confusion

In  1 Corinthians 14, verse 33,  we read these words;  “For God is not the God of confusion, but of peace.  As in all the congregations of the saints.”   The word “confusion” in that verse, is synonymous with “disorder” and “instability”.  What does disorder and instability lead to?  It leads to confusion.  Instability and disorder and confusion, doesn’t come from God.  It comes from the world!

The world is without a doubt, “confused”.  It’s in an almost constant state of disorder, and it seems to get worse all the time.  Although I’m fairly sure that it’s always been this way.  Confused, and in a state of disorder.

But God has given us a way out of all the confusion, and out of all the disorder, and all the instability, throughout the entire world.  And of course that way out, is Jesus Christ and His word.  Jesus is the “Rock” in an unstable world.  Jesus is the “direction” and the “purpose” that we need, in the midst of a disorderly world.  And Jesus provides peace and understanding, in the midst of a confused world.

And..  “I am the life!”   There is really NO confusion, about WHO gives us life, and WHERE that life is found, and the WAY we find it, and even the STEPS we take, in finding it.

The scriptures actually tell us, precisely WHY, there are so few, who are unable to find eternal life.  It’s because there’s an adversary, that makes it difficult, to find the narrow path.  We can think of that adversary, as a quite natural “force”, that permeates this entire world.  A “force” that God allows to “roam the earth”.

But mind you..  Just as James so clearly states, this isn’t some “outside force”.   But rather, it’s a “force” that’s right there inside of us;  And that “force”, that “roaring lion” so to speak, is unleashed, you might say, by our OWN lust.  That’s what the God of heaven says.  Our own lusts, waiting for the opportunity, seeking to devour ourselves, and others.

Let me direct your attention to  Galatians 5, verses 14 & 15;  “For the whole law, is fulfilled in one word:  (in other words, in this one decree)   “You shall love your neighbor as yourself.  But, if you keep on biting and devouring one another, watch out, or you will be consumed by one another.”   Consumed by our own lust!

Did you know that one’s own lust, is a “force” that has blinded the understanding, of the majority of people in the world.  It blinds the understanding of those who are UNWILLING to believe;  But whose own selfish desires, suppress the truth.  It’s the one’s whose carnal desires, are stronger than any spiritual desire they might have;  And so their own lust, blinds them to the truth, and it keeps them from being saved.   it keeps them living in sin.

The scriptures tell us in  2 Corinthians 4, verse 4;  “The god of this age, has blinded the minds (in other words, “the understanding”) of unbelievers, so they cannot see the light of the gospel of the glory of Christ, who is the image of God.”

The “light of the gospel” is there.  It’s throughout the whole world.  And it lights the path for everyone.  As we’re told in  John 1, verse 4;  “In Him was life, and the Life was the Light of men.”

However..  As we’re told in  verse 5;  “The Light shines in the darkness, and the darkness did not comprehend it.”   They didn’t understand it, and they didn’t accept it.  And they still don’t.  Why?  Because.. “The god of this age, has blinded the minds of unbelievers, so they CANNOT SEE, the light of the gospel of the glory of Christ, who is the image of God.”

And who is the “god of this age”?  Well, the “god of this age”, is..  “the god of this world”.   The word “age” in this verse, refers to the “age” while this world exists.  It doesn’t refer to some specific, and distinct period of time, in the history of the world.  But rather, it refers to ALL time, THROUGHOUT the history of the world!  That word “age”, means “perpetuity”  And “Perpetuity” is just like the word perpetual”, it just keeps going on, and on, and on;  Until the end of time.

I like the way King Solomon describes the “perpetuity of the world”, in  Ecclesiastes 1, verses 4 thru 10;  “A generation goes, and a generation comes, but the earth remains forever.  The sun rises, and the sun goes down, and hastens to the place where it rises.  The wind blows to the south and goes around to the north; around and around goes the wind, and on its circuits the wind returns.  All the rivers flow into the sea, yet the sea is never full;  To the place from which the streams come, there again they flow.  All things are wearisome; Man is not able to tell it. The eye is not satisfied with seeing, Nor is the ear filled with hearing.  That which has been, is that which will be; And that which has been done, is that which will be done. So there is nothing new under the sun.  Is there anything of which one might say, “See this, it is new “?  Already it has existed from ancient times which were before us.”

The “perpetuity of the world” and all things in it.  Of course, even “perpetuity” will someday end.   2 Peter 3:10  tells us;  “But the day of the Lord will come as a thief;  In the which the heavens shall pass away with a great noise, and the elements shall be dissolved with fervent heat, and the earth and the works that are therein shall be burned up.”

And then, at the end of time, when this world finally stops turning, when it’s dissolved with fervent heat”, then, the “god” of this world, will also come to an end.  But until that time, it “rules” this physical world.   Because that’s what a “god” does;  It “rules”.

Listen to this passage from  1 Corinthians 3, verses 1 thru 3;  “But brothers and sisters, I could not address you as spiritual people, but as people of the flesh, as infants in Christ.  I fed you with milk, not solid food, for you were not ready for it.  And even now, you are not yet ready.  For you are yet carnal:  For whereas there is among you envying, and strife, and divisions, are you not carnal, and walk as fleshly men?”

The result is instability.  The instability of divisions, of envy and strife.  Of gossiping, and of jealousy and  backstabbing.  And of pride and arrogance.

What is the “god” of all these fleshly works?  Of all this confusion and instability and disorder?   It’s not the God of heaven.  It’s the “god of this world”.  It’s satan, it’s the devil, it’s our own fleshly lusts!  It’s the spirit of a worldly, and fleshly, and carnal person.

But here’s what faith in God leads us to do;  Here’s what living by “the Spirit” produces..  “But the fruit of the Spirit, is love, joy, peace, patience, kindness, goodness, faithfulness, gentleness, self-control; Against such things there is no law.”  (Galatians 5:22 & 22)