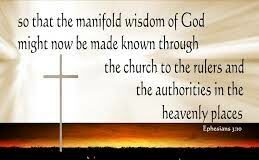 Principalities and Powers in the Heavenly Realm

Last week I spoke about the meaning of  Ephesians 3, verse 10.  And that verse specifically  has to with the fact, that it is a part of God’s eternal plan, that, as that verse phrases it..  “the manifold wisdom of God, should be made known by the church.”  In other words, Christians are the “vehicle” so to speak, that God has chosen to make His will known to the world.

2 Corinthians 4, verse 7  uses a different analogy to basically say the same thing.  That verse says;  “We have this “treasure”, in earthen vessels.”

Of course the “earthen vessels” being spoken of, are Christians.  But let me read  verses 6 & 7  together..  “For God, who said; “Let light shine out of darkness,” has shone in our hearts, to give the light, of the knowledge of the glory of God, in the face of Jesus Christ.  But we have this treasure in earthen vessels, (some versions say, “in jars of clay”) so that the surpassing greatness of the power will be of God and not from ourselves.”

It reminds me of   1 Corinthians 1:27,  where it says;  “But God has chosen the foolish things of the world, to shame the wise; God chose the weak things of the world, to shame the strong.”  And He chose weak Christians, to spread His word.  Let me read the whole passage surrounding that verse.  I’ll start with  verse 18,  and I’ll go all the way thru  verse 29;    “For the message of the cross, is foolishness to those who are perishing, but to us who are being saved, it is the POWER of God.  (hold on to that idea of the “message of the cross”, being “the power of God”)  For it is written; “I will destroy the wisdom of the wise, and the discernment of the discerning I will thwart.  Where is the wise man?  Where is the scribe?  Where is the philosopher of this age?  Has not God made foolish, the wisdom of the world?”

“For since in the wisdom of God, the world through its wisdom, did not know Him, God was pleased through the foolishness of what was preached, to save those who believe.  For Jews demand signs, (miracles)  and Greeks seek wisdom, but we preach Christ crucified, a stumbling block to Jews, and foolishness to Gentiles.  But to those who are called, both Jews and Greeks, Christ the power of God, and the wisdom of God.”

“For the foolishness of God, is wiser than men;  And the weakness of God, is stronger than men.  For consider your calling, brothers:  Not many of you were wise according to worldly standards, not many were powerful, not many were of noble birth.  But God chose the foolish things of the world to shame the wise;  God chose the weak things of the world to shame the strong.  God chose what is low and despised in the world, even things that are not, to bring to nothing, things that are, so that no human being might boast, in the presence of God.”

And  verse 30  says;  “And because of Him you are in Christ Jesus, who became to us, wisdom from God;  Righteousness and sanctification and redemption, so that, as it is written, “Let the one who boasts, boast in the Lord.”

And so to me at least, all of that is really a detailed commentary, of what we read from  2 Corinthians 4:6 & 7;  “For God, who said; “Let light shine out of darkness,” has shone in our hearts, to give the light of the knowledge of the glory of God, in the face of Jesus Christ.  But we have this treasure in earthen vessels, so that the surpassing greatness of the POWER, will be of God and not from ourselves.”

“Let light shine out of the darkness”.  That’s sounds like an analogy, to the creation of the world, where  Genesis 1, verses 2 & 3  says;  “The earth was without form and void, and DARKNESS was over the face of the deep. And the Spirit of God was hovering over the face of the waters.  And God said, “Let there be light,” and there was light.”

And so that is the physical counterpart, of “spiritual” light and darkness, where it says in  John 1, verse 5;  “The Light shines in the darkness, and the darkness did not comprehend it.”

But those who are “the called” do comprehend that light.  Listen to  2 Corinthians 4, verse 6  once again;  “For God, who said; “Let light shine out of darkness,” has shone in our hearts..”   The light of God does shine in our hearts, doesn’t it?  And the result is, it gives us..  “the light, of the knowledge of the glory of God, in the face of Jesus Christ.”

There was a time, when the light of God, came into the world, in a miraculous fashion.  It came through the Son of God, being born of a virgin.  But it doesn’t come into people’s hearts in a miraculous fashion today.  No, it comes into our hearts, It “shines in our hearts”, through the written word of God, no doubt shown to us, by a Christian.  That light comes to people today, “in earthen vessels”.

Let me say something about the phrase..  “in the face of Jesus Christ.”   “The light of the knowledge of the glory of God”, shines in our hearts, “in the FACE of Jesus Christ.”   That simply means..  in the “person” of Jesus Christ.  In the “manifestation” of Jesus.  Or you could say, “in the presence” of Jesus Christ.  That what that word “face” means.  Is Jesus Christ “present” with us?  Obviously Jesus is not here physically, but spiritually, He’s always present.  It’s kind of like what Jesus told His apostles, in  Mathew 18:20;  “For where two or three are gathered together unto My name, there am I in their midst.”  But that doesn’t mean He’s not also with you when you’re alone, all by yourself!   He’s with us always, inspirit, AND in word.

“The light of the knowledge of the glory of God, shines in our hearts in the “person” AND in the “presence” of Jesus Christ.

And do you know how the rest of the world can have the light of God shine in their hearts?  It’s through our faces, in other words, through our “person”, and through our “presence”, as we speak the word, and most especially, as we LIVE the word.

But what is the phrase, “the manifold wisdom of God” specifically referring to?  Is it simply the fact that God’s wisdom is all encompassing?  Or does it refer to something more specific?  Something more “fundamental” to our salvation?  “The manifold wisdom of God”, which has been left to the church, to show to the world, refers to God’s eternal plan of salvation.  It refers to this “treasure that we have in earthen vessels”.  And it refers to “the light that shone in our hearts”.   It refers to the “unsearchable riches of Christ”.  It refers to “the light, of the knowledge of the glory of God, in the face of Jesus Christ.”

It refers to all those things, because they’re all the same.  It’s the gospel of Christ, “the gospel of your salvation”.  (Ephesians 1:13)

Remember last week, how I talked  about the word “principality”?

Last Sunday evening, I gave an example of how that word is used in scripture, 95 % of the time.  The example is  Jude verse 6.  And it says;  “And the angels which kept not THEIR FIRST ESTATE, but left their own habitation..”   “Their first estate”, that’s the meaning;  That which is primary, and is fundamental, and foundational.  God gave the angels, a “principality” to observe and to remain within, but some angels left that “principality” and were cast out, because of it!

Jesus said in  Mathew 28:18;  “All authority in heaven and on the earth, has been given to Me.”   What do you think?  Do you think the gospel of Jesus Christ has authority?  It certainly does!

Now, let me point something out about  Ephesians 3, verse 10.   And this holds true with many many verses of scripture.  Our brother Ed Watts, (Beckie’s father) pointed out to me, many years ago, how that the sentence structure of Greek writing, is different than the sentence structure of our English writing.  In other words, the Greek places nouns and verbs and adjectives, in a different order than we do in English.

And an example he gave me, was that if we were to write..  “Susan and I went to the store yesterday”,  the Greek sentence structure might have it this way..  “The store, yesterday, Susan and I went.”   So you see what I mean, right?

But let me give you an example from an actual verse of scripture.  The scripture will be  2 Peter 2:9,  and you’re probably familiar with this verse.  And this will be from the KJV because the KJ has this worded more accurately than a lot of other versions have it.  So here is  2 Peter 2, verse 9;  “The Lord knoweth how to deliver the godly out of temptations, (out of trials) and to reserve the unjust, unto the day of judgment, to be punished.”

But now listen to the very odd sounding sentence structure of that verse, in the original Greek..  “Knows the Lord, the devout out of temptation to deliver, the unrighteous then, unto the day of judgment, to be punished, to keep.”

That’s rather awkward, isn’t it?  And so translators “rearrange” the words, into proper English sentence structure.  But sometimes, translators do a better job than other times, because sometimes, their own personal interpretation of scripture, influences how they decide to phrase it.

So now with that being said, I’m going to read  Ephesians 3, verse 10,  from the NASB, which phrases it in a fairly common manner.  And after that, I’m going to read it in the way that I believe it SHOULD be phrased, (because it’s the ONLY way it makes good sense) and because it gives us a much clearer understanding of what God is saying.

So then, here’s the “more common” way that you’re used to hearing it..  “So that the manifold wisdom of God, might now be made known through the church, to the rulers and the authorities in the heavenly places.”   And let me point out one more thing here..  Where it says, “TO the rulers”,  the word “TO” has been added by the translators.  It’s not in the original text.  The original simply says..  “principalities and authorities”, or “principalities and powers”.   “Rulers” is a poor choice of words here, and the word “to” doesn’t belong there at all.

And so hers’s the way to properly phrase that verse, so that it not only makes sense, but so that we can understand the simplicity, of what God is saying..

I’m going to read  verses 9 and 10;  “And to bring to light for EVERYONE, what is the plan of the mystery, (that’s the gospel)  hidden for ages in God, who created all things, so that now, through the church, the manifold wisdom of God should be made known, the principalities and powers, in the heavenly realm!”

So you can easily see, that the words “principalities and powers” are being used as a description, of the manifold wisdom of God;  The gospel of God, is absolutely and without a doubt,  the “principality and power” of salvation.

And so I hope you’ll come away today, with a little better understanding of at least this one, very misunderstood verse of scripture.