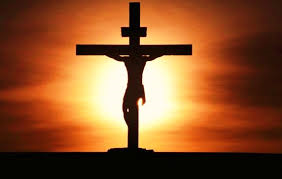 I suppose we could simply say..  Because that’s what God has ordained.  As we quote quite often,  Acts 4, verse 12  says;  “Neither is there salvation in any other:  For there is none other name under heaven, given among men, whereby we must be saved.”  God has ordained it, and therefore, that’s the way it is!  Salvation in no one else.  If you’re going to be saved, it will be by Jesus Christ.  If there was to be a sacrifice for sin, it would be the sacrifice of Jesus Himself.

Now don’t let this next verse throw you off, or confuse you;  But  Hebrews 10, verse 5  says this;  “Therefore, when Christ came into the world, He said:  Sacrifice and offering You did not desire, but a body You prepared for Me.”

Well, what are we to conclude from this statement?  That God DIDN’T want Jesus to become the “perfect sacrifice”?  No, it was indeed God’s will, and His command that Jesus become the perfect “Lamb of God”.   Jesus Himself said in  John 4:34;  “..My food is to do the will of Him who sent Me, and to accomplish His work.”

We know what Jesus accomplished on this earth, don’t we?   Three of the final words that Jesus spoke as He gave His life on the cross, were..  “It is finished!”   (John 19, verse 30)  Jesus had truly accomplished, and finished, the work that God the Father willed, that He should accomplish, upon this earth.  The work of becoming the “perfect sacrifice for sin”.

So then why does the bible say that.. “Sacrifice and offering You did not desire” ?

Those words from  Hebrews 10, verse 5,  are actually quite similar to  Psalm 40, verse 6;  That verse says;  “Sacrifice and offering You did not desire, but my ears You have opened.  Burnt offerings and sin offerings, You did not require.”

And  Psalm 51, verse 16  reaffirms that fact;  “For You do not delight in sacrifice, or I would bring it;  You take no pleasure in burnt offerings.”

So then what DOES our God desire, if it isn’t sacrifice and burnt offerings?  I think  Micah 6:6 through 8  explains it very well;  “With what shall I come before the LORD, when I bow before the God on high?  Should I come to Him with burnt offerings, with year-old calves?  Would the LORD be pleased with thousands of rams, with ten thousand rivers of oil?  Shall I present my firstborn for my transgression?  The fruit of my body, for the sin of my soul?  He has told you, O man, what is good;  And what does the LORD require of you, but to do justice, and to love kindness, and to walk humbly with your God.”

“He has told you, Oh man, what is good”   I suppose that’s why  Psalm 40, verse 6  says;  “Sacrifice and offering You did not desire;  But my ears You have opened.  Burnt offerings and sin offerings, You did not require.”  God has opened our ears too.  God has told us, through His word what He truly desires.

In other words, God desires righteousness, rather than sacrifice.  But since man has always failed, at righteousness, sacrifice became a necessary “ingredient”, you might say.

When  Hebrews 10, verse 5  says that “Sacrifice and offering You did not desire”,  the scripture is referring to the sacrifices of the old covenant law of Moses.  The preceding verses tell us that fact.   I read some of this, this morning, but it’s worth reading again, so that we get the context of that statement in  verse 5.   So here are  verses 1 thru 5,  so we get the full meaning..

“For since the law has but a shadow of the good things to come, instead of the true form of these realities, it can never, by the same sacrifices, that are continually offered, every year, make perfect, those who draw near.  Otherwise, would they not have ceased to be offered, since the worshipers, having once been cleansed, would no longer have any consciousness of sins?  But in these sacrifices, there is a reminder of sins, every year.  For it is impossible, for the blood of bulls and goats, to take away sins.  THEREFORE, when Christ came into the world, He said: Sacrifice and offering You did not desire;  But a body You prepared for Me.”

So you might ask at this point..  What did preparing a body for Jesus accomplish, that the animal sacrifices of the old law, could not accomplish.  Well, the next two verses answer that question.  (verses 6 & 7)  Here’s what it says;  (and this is as if Jesus were speaking)  “In burnt offerings and sin offerings, you have taken no pleasure.  Then I said;  Behold, I have come to do your will, O God, as it is written of Me, in the scroll of the book.”

And again, once again;  “Although He was a Son, He learned OBEDIENCE by the things He suffered; and having been made “PEFECT”, He became the source of salvation, to all those who OBEY Him.”

What did God accomplish, by preparing a body for Jesus Christ, when He entered this world?  God created the opportunity, for a human being, namely Jesus the Christ, to live a totally righteous life, a life with NO sin, just like what God truly desires!   That’s what a body, for Jesus accomplished.

It enabled Jesus, to become the “High Priest” described in  Hebrews 4:15;  “For we do not have a high priest who is unable to sympathize with our weaknesses, but one who in every respect, has been tempted just as we are, yet without sin!”   That’s what a body for Jesus accomplished.

None Righteous, No Not One

In  Romans 3:10 thru 12,  God inspired the apostle Paul to write these words,  “None is righteous, no not one;  No one understands, No one seeks for God; ALL have turned aside; Together they have become worthless; No one does good, not even ONE.”

And our God had already said the very same thing, way back in  Psalm 14:1 thru 3,   “The fool says in his heart, there is no God.  They are corrupt, they do abominable deeds, there is none who does good.  The Lord looks down from heaven on the children of man, to see if there are any who understand, who seek after God.  They have ALL turned aside; together they have become corrupt; There is none who does good, not even ONE.”

But now, Jesus Christ, in His body, became that ONE who actually DID fully understand, and fully seek God, and who fully, lived righteously, until His dying day!

From “being about His Father’s business”, in  Luke 2:49,  to 40 days of fasting in the wilderness  ((Mathew chapter 4, and Luke chap 4),  to  His 3 1/2 year ministry, where “the Son of man had no place to lay His head”,  Luke 9:58,  to His hours of being scourged, with whips made of leather, with shards of bone and metal laced into it, that ripped the flesh, to His hours of pain and agony upon the cross, Jesus “learned obedience, by the things that He suffered”.

Yet, in all that He was obedient in, He was still, without sin!  Knowing full well, the suffering that lay ahead, Jesus prayed to His Father and said, “..Nevertheless, not My will, but Thine be done”.  Luke 22, verse 42.

What made Jesus “perfect” was the fact that He was indeed, “..tempted in all things, as we are, yet without sin”.  For Jesus to have been “tempted”, He obviously had a “choice”, just like we have a “choice”.  Our choice is, exactly the same as His choice was;  To obey God, no matter what the trial, no matter what hardships may come because of that obedience, OR, refuse to do God’s will, so that we can do our own will instead.

Listen to this passage, from  Hebrews 2:14 thru 17;  “Since therefore the children share in flesh and blood, He himself likewise, partook of the same things, that through death, He might destroy the one who has the power of death, that is, the devil, and release those who through fear of death, were all their lifetime, subject to bondage.  For clearly He does not give help to angels, but He gives help to the descendants of Abraham.  THEREFORE (For this reason) He had to be made like His brethren in every way, so that He might become a merciful and faithful high priest, in service to God, in order to make atonement (some versions use the word “propitiation”) for the sins of the people.”

And  verse 18  says;  “For since He Himself was tempted, in that which He has suffered, He is able to come to the aid, of those who are tempted.”  And that’s all of us!

Do you think Jesus WANTED  to suffer death on the cross?  Of course He didn’t!  He was a MAN, and He felt the same PAIN we feel.  He felt the same EMOTIONS we feel.  The same TEMPTATIONS we feel!  But,  Philippians 2:8  says,  “And being found in appearance as a man, He humbled Himself by becoming obedient to death, even death on a cross!”  Do some research as to what “death on a cross” was like, and I’m sure you’ll come away with a deeper appreciation, for what Jesus has done for you and I.  And I’m sure that you’ll appreciate, His obedience, to the will of God.

Who but Jesus Christ could live a sinless life?  Who but Jesus Christ has that kind of love, for you and I?  “Greater love has NO one, than this, that a man lay down His life for His friends”.   John 15:13.  And  Verse 14  tells us;  “YOU are My friends, IF you DO whatsoever I command you.”    Righteousness, that’s what God desires.

Will You Do What Jesus Commands?

God has commanded us to DO certain things, just to become Christians.  Things that we MUST do, before our sins can be forgiven., and before we can be added to His church, the body of Christ.  God has done His part, Jesus has done His part.  Here is your part, and my part…

BE BAPTIZED for the forgiveness of your sins.  Jesus said in Mark 16:16,  “He who has believed and has been baptized, shall be saved.”   “Repent AND let each one of you be baptized, in the name of Jesus Christ, FOR the forgiveness of your sins, and you shall receive the gift of the Holy Spirit.”  Acts 2:38.   “And now, why do you delay?  Arise and be baptized, and wash away your sins, calling on the name of the Lord.”  Acts 22:16.

REMAIN FAITHFUL unto death.  We are promised by Jesus, in Rev 2:10,  “Be faithful unto death, and I will give you the crown of life.”

So after becoming a Christian, we still must KEEP doing all that He has commanded us to do, in living as Christ would live, and leading others to becoming Christians also.  It’s called, “keeping yourself unspotted from the world”, in  James 1:27.

Straight From The Word Of God

He was the only ONE, but He died for ALL

“For while we were still helpless, at the right time, Christ died for the ungodly.  For one will hardly die for a righteous man, though perhaps for the good man, someone would dare even to die.  But God demonstrates His love toward us, in that while we were yet sinners, Christ died for us.  Much more then, having been justified by His blood, we shall be saved from the wrath of God, through Him.  For if while we were enemies, we were reconciled to God through the death of His Son, much more, having been reconciled, we shall be saved by His life.”    Romans 5:6-10

Thanks for studying with me.  May God bless you with a greater understanding, and a greater love, each time you read His word.  Please, if you have any questions or comments, let me know, so that we can talk about these things, and let God direct us in finding the answers.