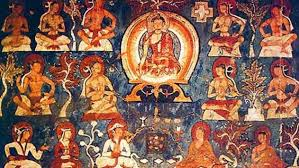 Speaking of Human-ism, here’s a definition of religion, from a purely humanistic point of view ..  “a pursuit or interest to which someone ascribes supreme importance”.  Whatever is most important to you, would be your religion.  For the philanthropist, his/her religion could be an attempt to relieve all pain and suffering from the world.  That would be a very noble pursuit of interest, or a very noble “religion”.

But on the other hand, there have been other people, whose main pursuit was to eliminate everyone who has a different opinion than theirs.  Wasn’t that Hitler’s “supreme pursuit”?  That’s Humanism at it’s highest level.

But here’s a few definitions of religion, that I want us to focus on today..

“The belief in, and the worship of, a superhuman controlling power”

“Belief in, or worship of, or obedience to, a supernatural power or powers, considered to be divine, or to have control of human destiny”.

“Fear and reverence of a god or gods, which consists in ceremonies, and disciplines”.

You’ve probably heard people say..  “I’m not religious, but I’m spiritual”.  As if there’s something “wrong” with being religious.  Being “religious” is simply having reverence for God.  And I suppose, to some people, that’s wrong.  But really, what people have against religion, is the “discipline” part of it.  But the fact remains, that if you’re going to have reverence for God, then you must discipline yourself.  And you must discipline yourself, according to God’s precepts, not according to your own fanciful ideas.

But basically, your “religion” is your belief about God, and your response to that belief.  So in that respect, even atheism is a “religion”.  It’s how a person feels about the existence of God.

Now here’s the bible definition of religion..  In  James 1, verse 27;  we’re told that “This is pure and undefiled RELIGION, in the presence of God;  To visit orphans and widows in their affliction, and to keep one’s self, unspotted, (or unstained) from the world”.  The Greek word translated “religion” in that verse, pretty much means exactly what those definitions say.

Thayer’s Lexicon phrases it like this..  “Fear of the God.  The worship of God, which consists of ceremonies”.   Strong’s concordance says..  “Reverence or worship, of the gods”.

So according to  James 1:27,  “pure and undefiled reverence of God”, consists at least in part, of keeping yourself free from sin, and in caring for those who can’t care for themselves.   And exactly how would caring for those in need, be considered reverence of God?  Well, Jesus put it this way, in  Mathew 25, verse 40;  “Truly I say to you; To the extent that you did it for one of the least of these My brethren, you did it for Me.”  That is reverence for God.

Now  James 1:27  doesn’t say anything about ceremonies or rituals, but it does speak of discipline.  Discipline in obeying the word of God, so as to keep ourselves “unspotted by the world”.  And the discipline of “visiting” those in need.

Now the word translated as “visit” quite literally means..  “to look upon, to inspect, to examine with the eyes”.  But in this verse, the meaning goes beyond that.

Are you familiar with the term, “Hebraistically”?  Hebraistic, or Hebraistically, means having to do with the Hebrew nation and culture.  James, who wrote this verse, was a Hebrew, a half-brother of Jesus.

And so to a Hebrew like James, and therefore “Hebraistically”, this word “visit” means..  “to look upon, in order to help or to benefit”.  (In other words, not just to “look” upon something, and inspect it.  But to “look” at it, with the intent to provide help and benefit)  “To look after, to care for, to provide for”.  “To furnish the things which are necessary”.  That’s what the scriptures means by the word “visit”.

Don’t you think that the parable of the good Samaritan is to an extent, an example of “pure religion”?   It’s certainly an example of “visiting” the needs of someone.

Of course Jesus told this parable in response to the question..  “Who is my neighbor?”   And so after telling the parable, Jesus asked;  “Which now of these three, thinkest thou, was neighbor unto him that fell among the thieves?”  And the man replied by saying;  “..He that shewed mercy on him.  Then said Jesus unto him;  Go, and do thou likewise.”  In other words, go and exercise “pure religion”.

That’s pure and undefiled religion, in the presence of God the Father!   Loving God, which of course means keeping His commandments, which also of course amounts to keeping oneself unspotted from the world, and loving your neighbor as thyself, and “visiting” their needs.

“Fear of God, and worship, which consists in ceremonies, and disciplines”.

Don’t we “discipline” ourselves to do “certain” things, almost every day?  And to NOT do certain other things?

Isn’t that what “keeping yourself unspotted from the world” would be?   Disciplining yourself to do certain things, and to NOT do other things.

We better make it a “ritual”   “To keep ourselves unspotted from the world”.

We better be disciplined enough, to “NOT be conformed to this world, but be transformed by the renewing of your mind.”  (Romans 12:2)

What do you think is the oldest religion that there is?

The most common answer that I’ve found to that question, is Hinduism.  Many people believe Hinduism is about 5,000 years old, and so they place it as older than Judaism which can be traced back about 4,000 years, if you go back to Abraham.  But Abraham didn’t practice Judaism, did he?  But Abraham had a religion.

What was Abram’s religion?  It really didn’t have a name did it?   But when you think about it, Abraham’s “religion” was God’s word.  Everything that God ever told Abram to do, was Abram’s “religion”.  What about Noah, who was born almost a thousand years before Abram?  Noah’s religion was the same as Abram’s religion.  Their religion was GOD.  What about Adam and Eve, who were the first people to ever exist, and their sons Abel and Seth?  (you notice I didn’t include Cain there)  The “name” of those people’s religion, was “God and His word”.  It didn’t need a “proper” name.   But you might say, the name of all of these people’s religion was, “Obedience to God”.  That was their religion, “Obedience to God”.   And they “lived it” in their everyday lives.  And so their religion wasn’t just a “name”, but rather, it was their “life”.

Aside from specific rituals that these men engaged in, directed specifically toward God..  and by that I mean, aside from the sacrifices that they all offered to God, what did their religion consist of?  Don’t you think that part of their religion was to keep themselves unspotted by the world.  That’s the reason God gave them laws to live by.  So that they could obey those laws, and remain unspotted by the world.

As a matter of fact, God specifically stated, that was the reason He gave the Law of Moses, was to keep the people “unspotted”.

Paul wrote in  Galatians 3:19,  “Why the Law then?  It was added because of transgressions.”  The people were sinning, so God gave them a law, so that when they obeyed it, they wouldn’t sin.  Doesn’t that make perfect sense?

God did the very same thing for Adam and Eve, and for Noah and his wife, and for Shem and Ham and Japheth and their wives, and for Abraham and Sarah, and for Isaac and Rebecca, and for Jacob and Rachel, and Leah.  He give them “rules” to follow.  Rules that basically separated them from the world.  Rules that kept them “unspotted by the world”.

Remember Enoch?  We know that God gave Enoch laws, because “Enoch walked with God”.  Enoch obviously walked in obedience to God,  according to those laws which God gave him.   Genesis 5:22.   You can’t “Walk with God” unless God tells you HOW to walk with Him.

Now, besides the specific sacrifices they made to God, and besides keeping themselves unspotted by the world, what else do you think their religion consisted of?  I’m sure it must have been to love the Lord thy God with all thy heart and with all thy soul, and with all thy mind, and to love thy neighbor as thyself.  After all, isn’t that precisely what loving God amounts to?  Jesus Himself said;  “If you love Me, you will keep My commandments.”  (John 14, verse 15)

God has many attributes, and one of them is, that He is consistent.  God has always been consistent.  We’re told in  Malachi 3:6,  “For I am the Lord, I do not change!”

And the bible says the same about Christ;  “Jesus Christ is the same yesterday, today, and to the ages.”  Hebrews 13:8.

We might typically say that we are of the “Christian religion”.  But really, we’re simply of the religion of GOD.  Just like Adam was, and Noah, and Abraham, and Isaac, and Jacob, and king David, and Jesus, and the apostles, and everyone who has ever followed God’s word.  We’re all of the one religion of God.  One body of believers;  One body of “obeyers”.

Is that a word..  “obeyer”?  I don’t know, but that’s what you’ve got to be, if you’re gonna be a part of God’s religion.  You’ve got to be one of the people who obeys His laws.  That’s what religion IS!  It’s not just a concept in your mind.  It’s a way of living your life.

The oldest religion in the world, is the religion of the only God that there is..  The God of heaven and earth.

And in order to be saved, through God’s religion..

And if you will do those things; God will add you to His body of “believers”, and of “obeyers”, and then one day, He’ll give you an eternal home in heaven.

May God bless you in the study of His word, and in the obedience to His religion.  It’s the oldest religion in heaven and on earth.