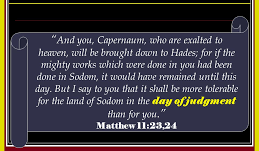 In our previous study, we had looked at an example of how hades was used in a figurative way, in  Mathew 11:23,  where Capernaum, who was “exalted to heaven” would be “brought down to hades”.

Now we’re going to see how hades is again used in a figurative sense in the story of the rich man and Lazarus, from  Luke 16:19-31.  We’ll just examine a few verses from that story.

Luke 16:19-20,   “There was a certain (by the way; the word “certain” in the original text, is an indefinite pronoun, which means.. some man, any man.  It does NOT mean a specific man)  So then..  “There was an indefinite rich man, and he was clothed in purple and fine linen, and lived in splendor every day.  And there was a certain (again, indefinite) beggar, named Lazarus (the name Lazarus means.. “one who God helps”) who was laid at his gate and was full of sores”.   From these first two verses of the story we have without a doubt, a depiction of one person who is quite exalted in his living condition, and one who is quite humbled, in his living condition. 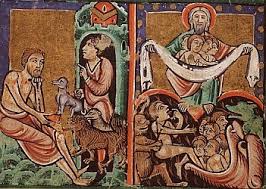 V-22  tells us..  “Now it came about that the beggar died and was carried away by the angels to Abraham’s bosom..”   There’s the humble being exalted.   “..And the rich man also died and was buried..”  There’s no being carried away to Abraham’s bosom here, and no being exalted.   V-23  says,  “And in hades, he lifted up his eyes being in torment, and saw Abraham far away, and Lazarus in his bosom.”   There’s no doubt here, this man had been humbled!   He used to be “rich” and was “dressed in purple and fine linen, and he lived in splendor every day”.  But now, he was in torment in “hades”, the humble realm of the unseen!

Listen to the contrast given in this next verse..

V-25  says this about these two men;  Speaking to the rich man..  “..Child, remember that during your life, you received your good things, and likewise Lazarus bad things.  But now he is being comforted here, and you are in agony.”

Now, has there been a “role reversal” here or what?  Has the exalted one been humbled?  And has the humbled one been exalted?  There’s no denying, that no matter what else you believe this story to be teaching,  it IS teaching that “He who was exalted has been humbled, and he who was humbled, has now been exalted.”

It will be up to you, to make up your own mind about the rest of the meaning of the story about the rich man and Lazarus.  Ask yourself though..  Does your interpretation contradict other scriptures, with a scene of punishment and reward in hades, or is there another explanation for it’s meaning, is hades simply used figuratively here?

Hades will be cast into the lake of fire

The final book of the bible, the book of Revelation, tells us that at the end of time, hades will give up the souls (the living, unclothed spirits) that are in this unseen realm, and how the hadean realm itself, will be cast into the lake of fire. 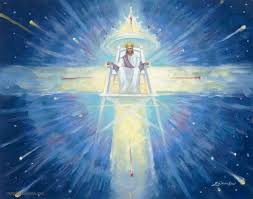 “And I saw a great white throne, and Him who sat upon it, from whose presence earth and heaven fled away, and no place was found for them.”   V-11.  (the present heavens and earth will be done away with, because they will have served their purpose..  2 Peter 3:7).   “And I saw the dead, the great and the small, standing before the throne, and the books were opened; And another book was opened, which is the book of life.  And the dead were judged from the things which were written in the books, according to their deeds.   V-12-13.  (Does that sound familiar?  Isn’t that exactly what we read about earlier, how we will be judged and recompensed at the judgment day?)   “And death and hades were thrown into the lake of fire.  This is the second death, the lake of fire.”  V-14.   (The first death is when one’s spirit is separated from their physical body.  The second death will be when one’s spirit is separated from God eternally, if their name is not in the book of life)  And if anyone’s name was NOT found written in the book of life, he was thrown into the lake of fire.”   Separation from God!   V-15.

When all the dead are resurrected at the judgment day, in other words when hades gives up all the dead that are in that realm, then there will be no further need for hades.  And since all souls will have been resurrected, DEATH will have been overcome, and so there will be no need for death either.  So then, death and hades will both be thrown into the lake of fire.  Just like..  “earth and heaven fled away, and no place was found for them.”   Everything that relates in any way with the physical, will be done away with.  The physical heavens and earth, physical death itself, and even the spiritual realm where spirits lived, who were separated from their physical bodies.

But until that time comes; Hades is the unseen realm where spirits DO live, after being separated from their bodies at death.  It’s a very humble state, where the spirit is unclothed.  But it doesn’t really matter that we’ll be unclothed, because the condition of our spirits while in hades is likened to sleep.  Remember what we had read from  1 Cor 15:51..  “We shall not all sleep, but we shall all be changed.”  We (our spirits) shall not all be separated from our physical bodies before Christ comes again.  Some people will still be alive (physical body, and spirit, together) at his coming. 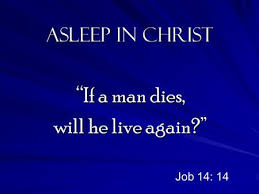 So, once again, who are  “those who have fallen asleep”?  Well obviously, they are the living spirits that have been separated from their bodies at death.

Some people believe that it’s the body that sleeps, not the spirit.  But the scriptures say otherwise.

Secondly, remember how it’s not the physical body that will be resurrected, but rather a spiritual body?   1 Cor 15:44.   “It is sown a natural body, it is raised a spiritual body.”

Third,  We just read in  1 Thess 4:14,  that God,  (Jesus Christ)  “will bring with Him, those who have fallen asleep in Jesus”.   Jesus is coming to gather the saved, who are the members of His kingdom, and deliver that kingdom to the Father in heaven.   1 Cor 15:24  says,  “Then comes the end, when He delivers up the kingdom to the God and Father..”   So just think for a second..  Is Jesus going to gather up a bunch of decaying bodies and try to deliver them up to the Father?   Of course not.  Remember  1 Cor 15:50..  “Flesh and blood cannot inherit the kingdom of God!”   So then, what exactly IS Jesus going to “gather up”, which is “asleep” in Jesus?  Simple common sense will tell you, it’s the spirits of those who have died, that are “asleep”.  That’s what Jesus is going to deliver to the Father.  Not the bodies, but the spirits!

Those who have fallen asleep, are said to be “in Jesus”.  “In Jesus”, or “in Christ”, is a phrase that means to be in a covenant relation with Jesus, and therefore to be in a saved condition.  Our bodies are never in a covenant relation with Jesus.  Our bodies will not be “saved” for anything.  It’s impossible for our bodies to be a part of the spiritual kingdom, that is  “not of this realm”,   John 18:36.  Our bodies are not in a saved condition.  It’s our spirits, that are “in Jesus”.  Our spirits are “in Christ”.

Our bodies are NOT who we are!  Our SPIRITS are who we are.  The body is called our “tent”, and our “house” and also our “clothing”, in  2 Cor 5:1-4.   If WE are “in Jesus”, it’s our SPIRITS that are being referred to.  If WE are brought with Jesus, unto God, it’s our SPIRITS that are being referred to.  When the dead “in Christ” shall rise, it’s not our physical bodies that will be rising, it’s our SPIRITS, in a spiritual body that will rise..  1 Cor 15:42.   Remember, death is the separation of body and spirit.  The term, “the dead in Christ”, obviously refers to the separated spirits, who are “in Christ”.

When our spirits are separated from our physical bodies, they will return to God who gave them.  God will safely “keep” them in the spiritual unseen realm called hades.  It will be a humble existence, where we will be “unclothed”, and in a condition likened to “sleep”. 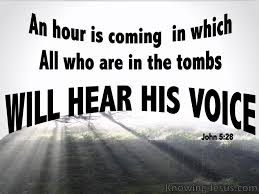 THEN, at the resurrection day,  “Thou will call, and I will answer!”   Job 14:15.   It won’t be our body answering, it will be our spirit that answers the call from God.

Please leave your comments or questions below.  I’d be very happy to hear from you.  Any comments, questions, or criticisms are welcome.