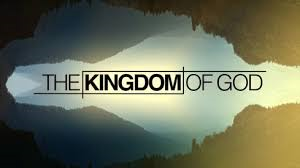 Two phrases that are used repeatedly in the new testament are;  “the kingdom of heaven”, and  “the kingdom of God”.  Both phrases are used to refer to the very same thing.  That only makes sense, since the dwelling place of God, is heaven.  (“the heaven of heavens”, or “the highest heaven”.  There’s two more phrases that always refer to the same thing)

It’s interesting to notice, that the old testament never uses a phrase that’s the exact equivalent, to “the kingdom of heaven”.   But it does speak about God and a kingdom.  Here’s what it says in  Psalm 22:28;  “For the kingdom is the Lord’s, and He rules over the nations.”   And then again in  Psalm 145:13,  it says;  “Thy kingdom is an everlasting kingdom, and Thy dominion, throughout all generations.”

The word translated “everlasting” can mean either “of long duration”, or it can mean “of antiquity”.  Antiquity refers to something from ancient times.   Listen to that verse, if we go ahead and use the word “antiquity”.  “Thy kingdom is from antiquity (it’s ancient) and Thy dominion, from generation to generation.”  In other words;  God’s kingdom is from as far back as you can go, and it extends as far forward as you can go.   You could well say, It’s eternal.

So then God has always had a kingdom.  And the word “kingdom” means that God has always had dominion, and rule, over everything.  Kingdom means, rule and dominion.  But it wouldn’t quite be accurate, to say that the reference to God’s “kingdom”, or to His “domain” and His “rule”, in the old testament, refers to the same thing as the phrases “the kingdom of God”, and “the kingdom of heaven”, that we read of in the new testament.

When the Psalms say;  “The kingdom is the Lord’s”, and “Thy kingdom is from antiquity”, those are what we might call “generic statements”.   They speak of God’s dominion and rule over everything, from eternity, and until eternity.  But when the new testament speaks about “the kingdom of heaven”, and “the kingdom of God”, it’s speaking about something much more specific.  It’s not talking about just the fact, that God has always ruled, and will always rule.

Here’s the first one;  Daniel 2:44  says;  “And in the days of those kings, (Daniel had been given a vision about some kings that would arise in the future)  So, “In the days of those kings, the God of heaven will set up a kingdom, which will never be destroyed..”  Verse 47  says;  “..the great God of heaven has made known to the king, what will take place in the future..”  So then again, the kingdom that is being prophesied about, did not exist at that time, but it would be “set up by God”, in the future.

Here’s the next prophecy;  Daniel 7:14,  Daniel once again prophesied about a kingdom that would come in the future.  Here’s what he said;  “And I kept looking in the night visions, and behold, with the clouds of heaven, one like a Son of Man was coming.  And He came up to the Ancient of Days, and was presented before Him.  And to Him was given dominion, glory, and a kingdom.  That all the peoples, nations, and language might serve Him.  His dominion is an everlasting dominion, which will not pass away, and His kingdom is one which will not be destroyed.”

So then again, a kingdom is being prophesied about.  It didn’t exist yet, but God was promising, that it would come in the future.

Now let’s get into the new testament, and notice some things that we’re told by God, about this kingdom, that’s been promised.   First, let’s go to  Mathew 3, verse 2.  John the Baptist is preaching, and he says;  “Repent, for the kingdom of God is at hand!”  The kingdom of God was not there yet.  It hadn’t appeared yet, and it hadn’t been established yet, but it was at hand.  In other words, it was near.

In  Mathew 6:13,  Jesus prayed to the Father, and He said;  “Thy kingdom come”.  It wasn’t there yet, but it was coming.   And here’s the first recorded time for us, that Jesus used the phrase “the kingdom of God”.  It was in  Mathew 6:33,  where He said;  “But seek ye first, the kingdom of God, and His righteousness, and all these things will be added unto you.”  The kingdom’s not here yet, but when it comes, you need to be seeking IT, above everything else.

But we can’t take the words “upon you” to mean that the kingdom was there, at that time, because in  Mathew 16:28,  Jesus told the people listening to Him;  “Truly I say to you, there are some standing here, who will not taste death, until they see the Son of Man coming in His kingdom.”   So Jesus still speaks about the kingdom as something that has yet to come.  And this time, He speaks of it as “HIS kingdom”.

Now, all of these verses nail down the fact that the kingdom had not come yet.  It was still in the future.  But now listen to  Luke 17, verses 20 & 21.  Now having been questioned by the Pharisees as to when the kingdom of God was coming, he answered them and said;  The kingdom of God is not coming with signs to be observed.  Nor will they say, Look, here it is, or there it is.  For behold, the kingdom of God IS within you.”

I think it would be a mistake to interpret that verse as meaning that the kingdom was presently, within the people that Jesus was speaking to.  First of all, that would contradict so many other verses that say the kingdom was still in the future, but that’s not the only reason why I don’t think that would be a correct interpretation.

When Jesus said those words, he was speaking directly to some Pharisees.  Let me read  verse 20  once again;  “Now having been questioned by the Pharisees..  (the KJV uses the word “demanded”.  The Pharisees were demanding an answer.  The word actually means to interrogate)  So, “The Pharisees interrogated Him, as to when the kingdom was coming, He answered them and said..”

Thayer’s Greek Lexicon suggests that instead of saying, that the kingdom is “within you”, it may be more accurate to translate that as, the kingdom is “in your midst”.  For something to be “in your midst”, is different than for something to be “within you”.   Something could be in our midst, here today, but that doesn’t mean that it’s inside of us.  This lectern here, is “in our midst”, but it’s not inside of us.

When Jesus and His apostles were gathered together for the Passover meal, there was a traitor in their midst, wasn’t there?  There was, but he wasn’t inside of everyone.  So then if Thayer’s is correct, and the proper translation of  Luke 17:21,  is that the kingdom of God was “in your midst”, in the midst of those Pharisees that Jesus was speaking to, what did He mean?   In what way was the kingdom in their midst?

Listen to this verse.  This is the very last time that Jesus said anything about the kingdom.  This was just hours before He was crucified.   Jesus said, in  Luke 22:18,  while He was eating the Passover meal with His apostles;  “I will not drink of the fruit of the vine from now on, until the kingdom of God comes.”

The kingdom, is the complete “body” of those who are called out of the world, isn’t that right?   Acts 2:39  says;  “For the promise is for you, and your children, and for all who are far off, as many as the Lord our God shall CALL to Himself.”   God calls, and we answer His call with obedience, right?

Once again;  God calls us out of the world, we receive His call by obeying His commands, and transfers us out of the world, and into the kingdom of His beloved Son, which is His body of the saved.  Just like Jesus said to Peter, in  Mathew 16:18;  “I will build My body of the called out..” (the church).  And  verse 19  says;  “I will give you (Peter) the keys to the kingdom of the heavens.”

So then Jesus wasn’t the kingdom, but He was going to “build” His kingdom.

Let’s go back to the thought of “the kingdom is in your midst”.  What was in the midst of those Pharisees?  The kingdom hadn’t come yet, so how could it be “in your midst”?   Acts 20:28  speaks of  “..the called out of the Lord, which He purchased with His own blood.”   Jesus hadn’t shed His blood yet, He hadn’t purchased the body yet, therefore it hadn’t come yet.   So then what was in the midst of the Pharisees?

The kingdom of God being in their midst, had to be a figure of speech, an analogy, we have no other choice but to realize that.  Something else, had to be representing the kingdom.  Since the kingdom hadn’t literally come yet, what was Jesus alluding to, when He said, it’s in your midst?

Well, this verse is very much like the verse from  Mathew 12:28,  where Jesus said;  “The kingdom of heaven is upon you.”   It was “upon them”, and it was “in their midst”.   That sounds about the same doesn’t it?  And that’s because those statements ARE saying just about the same thing.   I can’t tell you, that I can prove, what Jesus meant by saying that the kingdom was in their midst.  But here’s what I can tell you.

The Pharisees asked Jesus;  “When is the kingdom of God coming?”   And Jesus answered and said;  “The kingdom is not coming with signs to be observed;  Nor will they say;  Look, here it is, or There it is.  For behold, the kingdom is in your midst.”  If you’re going to enter the kingdom, you’re going to enter it through Me!   “I am the door”, Jesus said, in  John 10, verse 9;  “If anyone enters through Me, he shall be saved, and go in and out , and find pasture.”