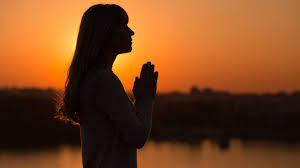 This will be at least a two-part lesson, this week and next week.  Today I’d like to talk about, What is prayer?  Next week I want us to consider what prayer is NOT.

But for now, what is prayer?  Prayer is simply talking to God.   There’s nothing mysterious about prayer, and there’s nothing complicated about it, or hard to understand, it’s simply you, talking to God.  Literally the word “prayer” means.. “an exchange of wishes.”  It’s not a “recital”, where you simply memorize something, and then recite it back to God.  (but I’ll get into that next week.

Philippians 4, verse 6   tell us;  “Be anxious for nothing, (don’t be full of worries and cares, and anxiety, over anything)  but in everything, by prayer and supplication, with thanksgiving, make your requests be made known to God.”

Philippians 4, verse 7,  says that when you do make our requests known to God, through prayer and supplication, with thanksgiving, then, “..the peace of God, which surpasses all understanding, shall guard your hearts and minds in Christ Jesus.”

In other words, when you give all your worries to God, then YOU, can be at peace, instead of being all full of anxiety, and stressing out, over things that probably, you can’t control anyway.   1 Peter 5, verse 7  says;  “Casting all your worries upon Him, because He cares for you.”

Our Father and our Friend

But we need to remember, that when we’re talking to our Father in heaven, we’re talking to God!   And so naturally we talk with respect, the respect that’s due to the Almighty creator of everything that exists.  But you know, I think that the bible pretty clearly implies, that we should consider God to be our friend, as well as our Father.

Of course when you read the whole context of  James chapter 2,  you see that there’s a definite implication involved, with the word “believed”.  The implication is that because of Abraham’s belief, or in other words, because of his faith, he obeyed exactly what God had told him to do.   Verses 20 thru 22  tells us;  “But will thou know, O van man, that faith apart from works is barren.  (or “dead” as some versions say)  Was not Abraham our father, (James was addressing the Jews there.  Abraham was “the father” so to speak, of the Jews)  “Was not Abraham, our father, justified by works, in that he offered up Isaac his son, upon the alter?”  (Why did Abraham offer up Isaac on the alter?  Because God told him to)  Thou seest that faith was working with his works, and by the works, faith was perfected, and the scripture was fulfilled, which saith;  And Abraham believed God, and it was reckoned to him as righteousness, and he was called the friend of God.”

You see, Abraham wasn’t really any more righteous, than you or me.  But he was obedient to what God told him to do, and maybe he was more obedient than you or me.  Maybe we need to work some more, on our obedience.  But whatever the case may be in that respect, the point is, that even though Abraham was weak and erring, just like we are, his obedience to the words of God, was “reckoned to him”, it was counted to him, as if he were righteous, in the absolute sense of the word.

All of us have failed, and at times continue to fail, at living a completely righteous life before God, and before our fellow man.  But thanks be to God, that if we do our very best to obey what His word in the bible tells us to do, and if we absolutely obey what the lord has told us to do, in order to be forgiven of our sins, then that obedience will be “reckoned to us” as if we were righteous.  Just like Abraham’s obedience was reckoned to him, as if he were totally righteous, even though he wasn’t.  That’s quite a plan that God has isn’t it?  Thanks be to God, for Jesus Christ, right?  Because Christ made it all possible.

And so, if we, because of our faith in God, will obey everything that He tells us to do, then we too will be considered to be “a friend of God”.  It wouldn’t make sense to think anything otherwise.

So now, let’s get back to the subject of prayer.  Talking to God, as our creator, the Almighty God, and as our Father, and also as our friend.  And remember what Jesus said, in  John 15, verse 14;  “And you are My friends, if you do the things which I command you.”

We don’t want to be afraid when we talk to God.  We want to feel comfortable, and we surely want to feel confident that He’s going to hear our prayer, and accept our prayer, and that He’ll consider our requests.   The bible says in  John 9:31;  “We know that God heareth NOT sinners, but if any man be a worshipper of God, and does His will, him He heareth.”

And let me say something about that phrase, “..if any man be a worshipper of God”.   That is not a reference to assembling together for worship.  The King James, and a couple other versions use the word “worshipper”, but the real meaning of the word is..  to be devout, and pious, and God-fearing.  If we truly are “devout Christians”, and if we truly are “God-fearing”, we will assemble for worship, every first day of the week.  But if we’re truly “God-fearing”, then we’ll do a whole lot more than that.  We will do His will in everything that we do.

“We know that God does not hear sinners, but if any man is God-fearing, and does His will, God will hear HIM.”   That verse is pretty much just a repeat of  Ecclesiastes 12, verse 13,  which tells us what our very purpose in life is.  “This is the end of the matter, when all has been heard;  Fear God, and keep His commandments, for this is the whole of man.”   That is the whole duty of man;  It’s the whole purpose of man.  To be “God-fearing”, to be devout, to do exactly what God has told you to do, as written in the bible.

And when we do that, when we fulfill our purpose, Then we know, that God hears our prayers.  And then we have confidence.  Then we can talk to God, as our Father, and as a friend, talks to a friend.

Hebrews 4:16  says;  “Let us therefore draw near with boldness, unto the throne of grace, that we may receive mercy, and may find grace to help in time of need.”   We don’t need to be afraid to talk to God, but we can have confidence, and even boldness, as the scripture says.  And what that means is that we can have assurance, and we can speak our mind.  It means that we can be absolutely frank and candid, in expressing our feelings.

And we can’t forget one of the most important parts of that verse;  And that part is..  “with thanksgiving”.

When we talk to God, we can talk about a lot of things, like I’ve already mentioned;  Our needs, our desires, our wishes, our hopes and our dreams.  But we need to always remember to give God our thanks, because that seems to be a crucial part of an acceptable prayer.  “..by prayer and supplication, with thanksgiving”

Psalm 107, verse 1  says;  “O give thanks to Jehovah, for He is good.  For His lovingkindness endureth forever.”

And what about Psalm 9, verse 1;  “I will give thanks unto Jehovah, with my whole heart.  I will show forth all Thy marvelous works.  In other words, I will acknowledge all that God has done.   Verse 2  says;  “I will be glad and exult in Thee.  (to “exult”, means to rejoice)  “I will be glad and rejoice in Thee;  I will sing praise to Thy name, O Thou, Most High!”

Listen to what happened, in  2 Chronicles 5, verses 13 & 14;  “It came to pass, that when the trumpeters and singers were as one, to make one sound to be heard, in praising and thanking Jehovah;  And when they lifted their voice with the trumpets and cymbals and instruments of music, and praised Jehovah, saying;  For Hs is good, for His lovingkindness endureth forever, that then the house was filled with a cloud, even the house of Jehovah, so that the priests could not stand to minister, by reason of the cloud;  for the glory of Jehovah filled the house of God!”

And when we do remember to thank God, then He tells us that we can feel free to ask Him for the things that we want.  “By prayer and supplication, with thanksgiving, let your request be made known to God, and the peace of God..  will guard your heart, in Christ Jesus.”

Colossians 4, verse 2,  tells us to “Continue steadfastly in prayer, watching therein, with thanksgiving.”

To be “watchful”, or “watching therein” as the scripture says, means.. to be awake and alert, and to be vigilant, and to be careful, and active, and speaking metaphorically, it means to be “alive” in prayer, all while maintaining an attitude of thankfulness.

If you would continue steadfastly in prayer, and be “alive in prayer”, you’ll most likely, also stay alive spiritually. But of course if our prayer life dies, we also, will most likely die.

I’ve talked today about what prayer is.  Next week, Lord willing, I want to talk about, what prayer, is NOT.   And I’ll also talk about some specifics, concerning how we should pray.  So please plan to be here next week, as we study a little deeper, about prayer.