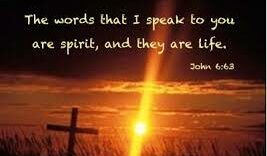 Exploring Some Similarities Between the Spirit of God, the Word of God, and the Son of God ?

I thought it would be interesting to explore some of the similarities, between the Spirit of God, the Word of God, and the Son of God.   I heard a little saying the other day, that goes like this..   “The Spirit of God, uses the Word of God, to make us more like the Son of God.”    So I thought that was a kind of cute saying, and an interesting way of looking at it.  But let’s go ahead and read some verses of scripture, and see what God actually says.

The Spirit of God

And let’s begin with  Genesis 1, verses 1 & 2;   “In the beginning, God created the heavens and the earth.  The earth was formless and void, and darkness was over the surface of the deep;  And the SPIRIT OF GOD, was moving over the surface of the waters.”  The Spirit of God, was “settling Himself” so to speak,  over the earth, and preparing to have His influence upon it.  God had already created the heavens and the earth, evidently through His own Spirit, and now His Spirit was about to “shape” and “refine”, what He had created.

But on top of that,  Hebrews 1, verse 2  says;  “But in these last days, He (God) has spoken to us by His Son, whom He appointed heir of all things, through whom also, He made the worlds.”   So then who exactly did create all that has been created?  Was it the Spirit of God, or was it the Word of God, or was it the Son of God?  The only answer would have to be..  Yes, it was all three.  Or, are the three, all one?   We learn from  John 1, verse 14,  that the Word of God, is the same as the Son of God!   And so the only question that would remain, is..  Is the Spirit of God, also the same as the Son of God?

Now, I might mention, as you no doubt already know, there is only one, Spirit of God.  Right?

Ephesians 4, verse 4  tells us;  “There is one body, (the body of Christ) and one Spirit, (the Holy Spirit of God) just as also you were called in one hope of your calling.”   Verses 5 & 6  go on to say;  “One Lord, (the Lord Jesus Christ) one faith, (the faith in the Word of God) one baptism, (baptism in water, for the forgiveness of sins; That was the only baptism that existed any longer, when this verse was written)  one God and Father of all;  Who is over all, and through all, and in all.”

But let’s get back to the fact, that there is only one, Spirit of God.   1 Corinthians 12:13  says;  “For in one Spirit, we were all baptized into one body..”   There’s that one Spirit, and one body, and one baptism again.  “Whether Jews or Greeks, slave or free, and we were all given one SPIRIT to drink.”  One “SPIRIT” to drink.  That’s an interesting way to phrase it.

God uses the words “eat” and “drink”, figuratively, to represent the partaking of, and the sharing of, God’s blessings, which are given, through the SPIRIT of God.

For example, in   1 Corinthians 10, verse 3,  speaking of Israel as they wandered through the wilderness, the scriptures says;  “They all ate the same spiritual food.”

Here’s what Paul delivered unto us;  “..That the Lord Jesus on the night in which He was betrayed, took bread;  And when He had given thanks, He broke it and said;  This is My body, which is for you;  Do this in remembrance of Me.  Likewise also the cup, after having supped, saying;  This cup is the new covenant in My blood;  Do this, as often as you might drink it, in remembrance of Me.”   (1 Corinthians 11:23 thru 25)   Have you then “partaken” of the Lords supper then, when you read those words?  I don’t think so.   You might have learned about the Lord’s supper, but you haven’t “partaken” of it yet.

Remember what we’re told in  James 1:22;  “But be ye doers of the word, and not hearers only, deceiving your own selves.”   That’s how you partake of God’s Word.  And that’s how you “partake” of the Spirit of God!

“FOR,  they drank, (they “partook”)  from the spiritual rock, that accompanied them;  And that rock, was Christ.”   Christ is THE “spiritual rock”.   Just like the song says;  “On Christ the solid Rock I stand;  All other ground is sinking sand”.

“But everyone who hears these sayings of Mine, and does not DO them, will be like a foolish man, who built his house on the sand:  And the rain descended, and the floods came, and the winds blew, and beat upon that house, and it fell!  And great was the fall of it!”

And great was the fall, of all but two persons, out of an entire generation of Israelites, who were saved from their Egyptian bondage, only to perish in the wilderness, because they did not DO, what the Word of God commanded.  “And with whom was God angry for forty years?  Was it not with those who sinned, whose bodies fell in the wilderness? And to whom did He swear, that they would never enter His rest?  Was it not to those who disobeyed?  So we see that they could not enter in, because of unbelief.”   (Hebrew 3:17 thru 19)  Unbelief, is the absence of trust in God’s word, which results in disobedience to God.

Ask yourself this..  Who was the leader of the nation of Israel, throughout that 40 years of wandering in the wilderness?  It was Moses, right?  And whose Word was guiding Moses, as he guided the people?  It was the Word of God, right?.  And who IS the Word of God?  The Word of God, is of course, Christ, the “Spiritual Rock”.

And in  verse 26  Jesus says;  “But the Helper, the Holy Spirit, whom the Father will send in My name, He will teach you all things, and bring to your remembrance all that I said to you.”

And Jesus also said, in  John 16, verse 13;  “But when He, the Spirit of truth comes, He will guide you into all the truth;  For He will not speak on His own initiative, but whatever He hears, He will speak;  And He will disclose to you what is to come.”

Do you see the preeminence of the Father?  All three are dependent upon the Father.   Now  Colossians 1, verse 18  tells us;  “And He (Christ) is the head of the body, the church, who is the beginning, the firstborn from the dead, that in all things He may have the preeminence.”   But who gave Christ all that preeminence?  Well it was the Father of course.

Do you remember what Jesus said about the Holy Spirit, in  John 16:13..   He said, the Helper, the Spirit of truth,  “..will not speak on His own initiative, but whatever He hears, He will speak..”   And  Jesus had said, in  John 12:49;   “For I did not speak on My own initiative, but the Father Himself who sent Me, has given Me a commandment as to what to say, and what to speak.”

They all come forth from within the Father, who is above all, and through all, and in all.  And no one speaks of His own initiative;  But speaks only, as He has been directed from the Father.

The Spirit GIVES life, and the Son IS the life, and the life is IN the Word;  IF we will hear the Word, and believe that Jesus is the Christ, the Son of God.  And if we will confess our faith in Him, and repent of our sins, and be baptized for the forgiveness of our sins, and remain faithful unto death.  Then we will have that life.

The invitation is yours, as we stand and sing our closing hymn.