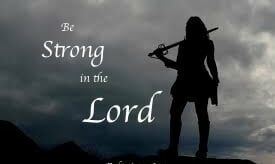 Grow Strong in the Lord!

Ephesians 6:10  says;  “Finally, be strong in the Lord and in His mighty power.  Put on the whole armor of God, that ye may be able to stand against the wiles of the devil.  For our struggle is not against flesh and blood, but against the rulers, against the authorities, against the powers, of this world’s darkness;  And against the spiritual forces of evil, in the heavenly realms.  (in the spiritual realms)
1 John 5, verse 4  tells us;  “For whatsoever is born of God overcomes the world;  And this is the victory that overcomes the world, even our faith.”    Faith is the victory, that overcomes the world.
See if you agree with these next few statements that I saw the other day..
“Faith in God, is like the muscles in our body.  A muscle has to be pushed to it’s limit of endurance, in order to build more strength.  If we don’t increase the stress training , the muscle will not grow.  In the same way faith must be tested to its limit of endurance, in order to expand and grow.”
“We can not stand still, in trying to increase our spiritual strength.  We as believers, can either be progressing, or regressing, in our maturity at any given time.  No status quo here !!!!  Still it takes time to develop strong and enduring faith.”
“Most of us can no more trust God for big things, without ‘faith training’, than we can go out and run a marathon, without physical training.”
What do you think?  Do you think that’s true?
James 1, verses 2 thru 4  tell us;  “Consider it all joy, my brethren, when you encounter various trials, knowing that the testing of your faith, produces endurance.  And let endurance have its perfect result, so that you may be perfect and complete, lacking in nothing.”
The “testing of your faith”.  That’s “strength training”, for our soul;  “The testing of your faith”.   Pushing your faith to the limits, so that it can be stronger each time.  Able to endure more, and more, and more, until you can endure anything that comes your way.
For a few Sunday evenings, we were studying about how suffering can benefit us spiritually.  And the author of the work that we were studying from, was stressing the fact that it is actually God’s providence, that allows us to suffer tribulations!   God’s providence!   You probably think of God’s providence as taking tribulations away!   You probably don’t view God allowing tribulations, as a part of His providence.
But trials, and temptations, and tribulations, all test our faith, don’t they?  I would say they do;  They do test our faith!   And  that’s exactly why James wrote, in  James chapter 1;  “Consider it all joy, my brethren, when you encounter various trials;  Knowing, that the testing of your faith, produces endurance.
In other words, LET there BE trials and tribulations for us to endure, so that we can grow in faith.  And so that our faith can grow in endurance.  Let there be tribulations, and trials, and temptations.  Let ’em come!   Because God says;  “No temptation has overtaken you, but such as is common to man;  And God is faithful, who will not allow you to be tempted beyond what you are able;  But with the temptation will provide the way of escape also, so that you will be able to endure it.”   1 Corinthians 10, verse 13.
Let ’em come, because that’s how we grow!   Just like the muscles in our body grow stronger and stronger, when they’re stressed, and when they’re used hard, and when they’re tested;  So does our faith grow, when our faith is used, and when it’s tested.
When is the last time you really had to “use” your faith?   In other words;  When is the last time you really had to rely on your faith, to see you through something?  Maybe, you’ve had to “use your faith” to keep you from sinning somehow.   Maybe you’ve been tempted to say, or do something that you know is wrong, and you really had to fight yourself to not say or do it.  Our fleshly nature, and so many times our pride, makes it awfully easy to sin.  And it takes a lot of faith to overcome that.  We probably need to be using our faith a whole lot more than we do.
Listen to what the apostle Paul wrote, about our tendency to sin so easily;  About the predicament that we’re in, in life..  I’m going to read from  Romans chapter 7,  beginning with  verse 9;  “I was once alive apart from the Law;  But when the commandment came, sin became alive, and I died.”   Were we ever “alive apart from the law” of God?  Weren’t we all “alive apart from the law”, before we reached the age of accountability?  Yes we were.

But then we became amenable to the law, because we became of the age where we could know, and understand clearly, the concept of law, and of God’s authority, and of sin.   And we became sinners, didn’t we?  So let’s continue with what Paul wrote, starting now with  verse 10;  “..and this commandment, which was to result in life, proved to result in death for me.  (The law results in death, instead of life, because we disobey it)  For sin, taking an opportunity through the commandment, deceived me, and through it, killed me.”