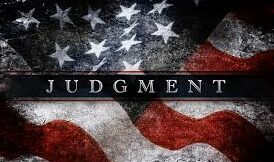 “Moreover the word of the LORD came unto me, saying;  And you, son of man, thus says the Lord GOD, to the land of Israel;  An end!   The end is coming on the four corners of the land.”   God said that to Israel, in about 570, maybe 580 BC.  But when we read it today, is that what God is saying to us?

“And Mine eye shall not spare thee, neither will I have pity:  But I will recompense thy ways upon thee, and thine abominations shall be in the midst of thee, and ye shall know that I am the LORD!”  (Exclamation point!)  “This is what the Lord GOD says:  Disaster! An unprecedented disaster;  Behold, it is coming!”   With the way things are going in our country, it makes me wonder, if it’s not already here.

“Your doom has come to you, O inhabitant of the land. The time has come, the day is near;  Tumult, rather than joyful shouting on the mountains.”

Does anyone remember the story of Nebuchadnezzar, in  Daniel chapter 4?   God’s prophet Daniel interpreted a dream for king Nebuchadnezzar, and here’s what the interpretation was, beginning with  verse 25;  “You will be driven away from mankind, and your dwelling will be with the beasts of the field.  You will feed on grass like an ox, and be drenched with the dew of heaven, and seven times shall pass you by, until you acknowledge that the Most High rules over the kingdom of mankind, and gives it to whom He wishes.  And inasmuch as they gave the command to leave the stump and roots of the tree, your kingdom shall be assured to you, after you come to know that Heaven rules.”

And then Daniel says this to the king, in  verse 27;  “Therefore, O king, let my advice be acceptable to you;  Break off your sins by being righteous, and your iniquities by showing mercy to the poor.  Perhaps there may be a lengthening of your prosperity.”

So Nebuchadnezzar was given fair warning.  And he was given the advice of a faithful man of God, but he didn’t listen.  And so the story continues in  verse 29,  with these words;  “At the end of the twelve months, he was walking about the royal palace of Babylon.  The king reflected and said;  Is this not Babylon the great, which I myself have built as a royal residence, by the might of my power, and for the glory of my majesty?”

Nebuchadnezzar was king over a great empire.  I really can’t imagine what living in a time like that would have been like.  But you know, it makes me think;  We sure used to live in a great country, didn’t we?  A country in which the majority of people loved, and respected God.  I don’t imagine it was like that in the Babylonia.  But we used to live in a country in which the majority of people believed in the morality of the bible, and for the most part, lived like it.   A country that stood for freedom, and rights, for the people.  The common every day citizens of the country.

Sure there were problems, nothing was ever perfect, but didn’t we have it good in this country?  I know that I sure had it good growing up.  And I imagine you did too.  I don’t mean that my family had lots of money or anything.  On the contrary actually;  My mother had to got to work to support us when my sister and I were still in grade school.  We family never had a car, we took the bus where we needed to go.  But we still had it good, and we still had everything we needed.  We lived in a nice quiet neighborhood.  There were lots of other kids.  Lots of families, and we just went out and had fun every day.  And that was in a big city, that was in Chicago.  I actually wish I could have grown up out here.

Even as far back as when I first got out of High school, I wanted to get out of the city and live in a quieter place, where you could enjoy nature all around you.  And when Jan and I first moved out here to Wyoming, this was a great place to live.  It’s still a good place, but it’s not as good as it was back then.  There’s a lot of different people here now.  People who don’t have the same values that most of us grew up with.  And so I simply can’t imagine what it would be like now, to live on a big city.

What happened to the country that we grew up in?  What happened?  When did the values that we took for granted, almost cease to exist?  And why did it happen?  I’m not sure what the answer is.

But let me get back to the story of king Nebuchadnezzar.  Once again,  Daniel 4, verses 29 & 30  says;  “At the end of the twelve months, he was walking about the royal palace of Babylon.  The king reflected and said;  Is this not Babylon the great, which I myself have built as a royal residence, by the might of my power, and for the glory of my majesty?”

And then  verse 31  says;  “While the words were still in the king’s mouth, a voice came from heaven: “It is decreed to you, King Nebuchadnezzar, that the kingdom has departed from you.”   Wow!  How quickly it came.  Even though it was  year since it was first foretold, when it did come, it came quick!

That’s how the bible tells us that Christ is going to come;  Quickly!   Revelation 22:12  says;  “Behold, I am coming quickly;  And My reward is with Me, to render to every man according to what he has done.”   That word “quickly” can mean either soon, or suddenly.  I think it means suddenly, but either way, I think we’ve been warned, haven’t we?  Jesus is coming;  And whether it’s soon or suddenly, or both, it won’t make much difference.   “..and My reward is with Me”,  He says.

And the word “reward” doesn’t only refer to a “good” reward.   No, it means a recompense, a “pay back”, whether good or bad.  Heaven or hell.  When Christ returns, not before, that’s when people will receive, either heaven or hell.   “My reward is with Me.”

1 Thessalonians 5, verse 2  says;  “For you yourselves know full well, that the day of the Lord will come just like a thief in the night.”  In other words, “suddenly”.   And  verses 3  says;  “While they are saying, “Peace and safety!” then destruction will come upon them suddenly, like labor pains upon a woman with child, and they will not escape.”

And  verses 4 thru 6  continue;  “But you, brethren, are not in darkness, that the day would overtake you like a thief;  You are all the children of light, and the children of the day:  We are not of the night, nor of darkness.  Therefore let us not sleep, as others do, but let us watch and be sober.”

Verses 7 & 8  would be worth reading too;  “For those who sleep, sleep at night;  And those who get drunk are drunk at night.  But let us, who are of the day, be sober, putting on the breastplate of faith and love, and as a helmet, the hope of salvation.”    In other words, whatever comes, and whenever HE comes, let your faith, and your love, and your hope, see you through.  Trust, in those three things.

Now let’s go back again to Nebuchdnezzar;   Daniel 4, verses 32 & 33;   “You will be driven away from mankind to live with the beasts of the field, and you will feed on grass like an ox. And seven times will pass you by, until you acknowledge that the Most High rules over the kingdom of mankind and gives it to whom He wishes.”

We’re not told how Nebuchadnezzar was driven away, whether other men overthrew his kingdom, or if God Himself sent angels from heaven to drive him away, but it happened, and it happened fast.  Daniel had told him;  “..let my advice be acceptable to you;  Break off your sins by being righteous, and your iniquities by showing mercy to the poor.  Perhaps there may be a lengthening of your prosperity.”  But again, he didn’t listen.

Let me finish with the reading I began, in  Ezekiel 7.   I read as far as  verse 7,  and so here’s the rest;  “Now will I shortly pour out my fury upon thee, and accomplish Mine anger upon thee: and I will judge thee according to thy ways, and will recompense thee for all thine abominations.  And Mine eye shall not spare, neither will I have pity: I will recompense thee according to thy ways and thine abominations that are in the midst of thee;  And ye shall know that I am the LORD that smiteth!”   Pretty much the same thing he told old Nebuchadnezzar.

“Violence is risen up into a rod of wickedness:  None of them shall remain, nor of their multitude, nor of any of theirs:  Neither shall there be wailing for them.  The time is come, the day draweth near:  Let not the buyer rejoice, nor the seller mourn:  (In other words, don’t worry about what you might have acquired, and don’t worry about what you’ve given up, because you’re all doomed!)  For wrath is upon ALL the multitude thereof.  For the seller shall not return to that which is sold, although they were yet alive:  You might be alive physically, but you’re not going to be blessed by God anymore.  “For the vision is touching the whole multitude thereof, which shall not return;  Neither shall any strengthen himself in the iniquity of his life.”   When God says its; over, it’s over!

And that’s our lesson from  Ezekiel 7, verses 1 thru 13.   Can we learn anything from it?   I hope that we can.  God’s in charge isn’t He?  And He’s blessed us so richly, that we don’t even know anything else except His blessings.  But it can all end, in a moment.  Kind of like a thief in the night.  And suddenly all those blessings can be gone.

Stand up for God!  Stand up for what’s right, and be vocal about it.  Don’t be a silent minority.  Don’t be a minority at all.  Stand up for Christ, and be the majority;  Just you and Christ.  Jesus said in  Mathew 12, verse 30;  “If you’re not for Me, you’re against Me.”   And if we don’t stand up for Him, and let it be known loud and clear, that we’re for Him, then we might as well be against Him.

I invite you to hear the word of God, and believe that Jesus is the Christ.  To confess your faith, to repent of your sins, and to be baptized for the forgiveness of yours sins, and to remain faithful unto death.