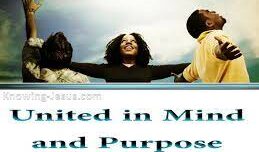 No Divisions Among You

I’d like to begin by reading  1 Corinthians 1, verses 10 thru 13..  Go ahead and follow along in your bibles if you would..  “Now I exhort you, brethren, by the name of our Lord Jesus Christ, (in other words, by the authority of Jesus) that you all agree, and that there be no divisions among you, but that you be made complete, in the same mind and in the same judgment.”

There was some strife, and contention within the congregation in Corinth.  The members were “labelling” themselves.  And instead of everyone being “One Body”, they were dividing themselves, and trying to make themselves “distinct” from one another.  They might as well have been in various separate “bodies”.

Here’s what Paul says in  verse 11;  “For it has been reported to me by Chloe’s people, that there are contentions among you, my brethren.”  (contentions, and strife, and divisions!)

Christ hasn’t been “divided”!  So why are you “divided” ?   Jesus was the one who was crucified for you!  Not Paul, or Apollos, or Cephas!  And what good would it have done, even if any of those other men were crucified?  So what?  They couldn’t have accomplished one bit, when it comes to salvation!  But Jesus Christ was crucified for the sins of the entire world!  Why in heaven or on earth would anyone want to be “of anyone” other than of Christ!  Why would anyone, want to be anything other, than simply a “Christian”, and a Christian alone?

Don’t be dividing yourselves up into these “groups of men”..  Into Paulites, and Apollonians, and Cephists;  Or any other man’s name that you can think of.   Do you want to be “of Christ”, the Son of God?  Or do your want to be of some mere man?  When you think about it, it doesn’t even make sense does it?  Why would anyone, not simply want to be “of Christ” alone?

I mean, it’s like the scripture says;  “And there is salvation in none other;  For there is no another name under heaven, having been given among men, by which we must be saved.”  (Acts 4, verse 12)

What’s in a name? ..  People might ask.  Well, according to God, salvation is in “a name”!  And it’s in ONE name, and one name alone!  The name of Jesus Christ!

So there was contention in that congregation in Corinth.  Contention and strife, and division, because they failed to understand..  “What’s in a name?”   And what do you think it is, that leads to that kind of contention, and division?  Could it be pride?  Oh, you were only taught by Apollos, but I was taught by Paul himself!  Or I was a taught by Peter, the “Rock”.

It doesn’t matter who it was that the Lord used to show you, or maybe to explain to you the truth of the gospel, it was still GOD, who taught us all.   Jesus said, in  John 6, verse 45;  “It is written in the Prophets, ‘And they will all be taught by God.’  Everyone who has heard and learned from the Father, comes to Me.”

Listen to what Paul wrote in  2 Corinthians 4, verses 5 thru 7;  “For we do not proclaim ourselves, but Jesus Christ as Lord, and ourselves as your servants, for Jesus’ sake.  For God, who said, “Let light shine out of darkness,” has shone in our hearts, the radiance of the knowledge of the glory of God, in the face of Jesus Christ.”  (in other words, “in the appearance of Jesus Christ”)  Jesus IS the “radiance” of God Himself.  Hebrews 1, verse 3  says;  “And He is the radiance of His glory, and the exact representation of His nature.”

Now back to  2 Corinthians 4,  and  verses 8 thru 14;  Paul had just described himself, and other Christians, as “earthen vessels” carrying the gospel of Christ.  And “earthen vessels” are a symbol of weakness and frailty, you might say, as contrasted with the strength and power of the gospel that we carry with us.

And so now Paul continues with this analogy;  “We are afflicted in every way, but not crushed;  Perplexed, but not driven to despair;  Persecuted, but not forsaken; cast down, but not destroyed;  Always carrying in the body, the death of Jesus, so that the life of Jesus may also be manifested in our bodies.”   What Paul means by  “Always carrying in the body, the death (or “the dying of Jesus”),  is the fact that as  we live our lives in this body, we are to be constantly “dying to sin”, just as Jesus “died to sin”.

Here’s how it’s phrased in  Romans 6:10 & 11;  “For the death He died he died to sin, once for all;  But the life He lives, He lives to God.  So you too, must count yourselves dead to sin, but alive to God, in Christ Jesus.”  And so just like Jesus “died to sin” and “lives for God”, so too, we also must die to sin, “so that the life of Jesus may also be manifested in our bodies.”

And now Paul continues with these words..  “So then, death is at work in us, but life is at work in you!  But having the same spirit of faith, according to what is written, “I BELIEVED, THEREFORE I SPOKE,” we also believe, therefore we also speak, knowing that the One who raised the Lord Jesus, will also raise us with Jesus, and present us with you, in His presence.”

Now that is a wonderful thought!  The thought of being presented to God, along with Jesus Christ Himself.  1 Corinthians 15, verse 24  says;  “Then comes the end, when He delivers over the kingdom to the God and Father, when He has abolished all rule and all authority and power.  For He must reign until He has put all his enemies under his feet.  The last enemy to be destroyed is death. “  What a glorious thought!  No more death, no more pain, and no more sorrow, no more worry, no more anything, except joy and happiness.

Jesus said to His apostles, in  John 14, verses 2 & 3;  “In my Father’s house are many dwelling places;  (several versions say “many mansions” implying the richness of the blessing of heaven)  If it were not so, I would have told you;  For I go to prepare a place for you.  And if I go and prepare a place for you, I come again, and will receive you unto myself; that where I am, there ye may be also.  And where I go you know, and the way you know.”  Again, what a wonderful thought.

Jesus is the way, isn’t He?  Jesus is the ONLY way!  “I am the way, the truth, and the life.  No one comes to the Father, but by Me.”  (John 14:6)   Paul isn’t “the way”.  And Peter isn’t “the way”.  No mere man is “the way”.  Only Jesus.  Only “in Jesus name” can we find forgiveness and eternal salvation.  I pray that the whole world would forget the “names of men”, and stick with the “name that is above every name”  Philippians 2, verses 9 & 10  say;  “Therefore God has highly exalted Him, and bestowed on Him the name which is above every name; That at the name of Jesus, every knee should bow, of things in heaven, and things in earth, and things under the earth.”

And you know what the result is, when you’re taught by God’s word alone?  You end up with Christians, with “no divisions among you”.   We’re exhorted in  Philippians 2, verse 5;  “Let this mind be in you, which was also in Christ Jesus.”   You can’t have the “mind of Christ” and also have divisions!  It simply can’t happen.  It’s like the question that Paul asked the Corinthians;  “Is Christ divided?”  Who were you baptized into?

Is it a big deal what name you go by?  It’s absolutely a big deal!  Salvation is in the name of Christ alone.  Wear the name Christian, and Christian alone, and be thankful that our God ahs been so merciful toward us, that He has given His only Son, to die for our sins.  He is the way, the truth, and the life, and no one comes to the Father, but by Him.