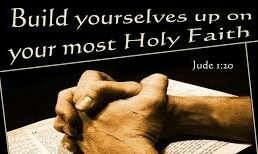 Sharpening our physical senses, is not “edification”.   I found something on the internet last week, that was titled..

“10 Ways to Sharpen Your Senses”    Here’s the ten categories that were mentioned..

So then, there are ways to “sharpen” or “build up” your senses.  But that’s not what “edification”. is.

And the second thing that the scriptures speak of as being “edifying”, is obedience to the commands of God.  Proverbs 13:13  tells us;  “Whoever despises the word, brings destruction on himself;  But he who reveres the commandment, (in other words..  He who obeys the commandment)  will be rewarded.”  He will see spiritual “gain”.   Or we might say..  “spiritual improvement”!

Now, I just got done telling you that gaining knowledge of God’s truth, IS edification.  But now I’ve read a verse that says..  “knowledge puffs up”.   In other words, knowledge leads to arrogance.  Certainly arrogance isn’t the same as edification is it?  So then, what’s the truth?  Does knowledge lead to arrogance, or does it lead to edification?  Actually, it can do both.

Knowledge surely can bring edification.  Here’s another passage that  basically declares that as a fact..  Ephesians 4:11 thru 13  says;  “And He gave some indeed to be apostles, and some prophets, and some evangelists, and some shepherds and teachers..”  Now let me stop for a moment.  What did all these people impart to the early Christians?  The apostles, and the prophets, and the evangelists, and the shepherds and teachers.  They all imparted knowledge!  And what was the purpose for imparting that knowledge?  According to this passage, it was..  “..for the equipping of the saints, for the work of ministry, for the EDIFYING of the body of Christ, until we all may ATTAIN to the unity of the faith, and of the KNOWLEDGE, of the Son of God, unto a complete man, to the MEASURE of the stature of the fullness of Christ.”   Knowledge and edification, are shown in this passage, to be inseparable!

So then, if knowledge is such an integral part of edification, how can knowledge “lead to arrogance”.  Well, this is an example of taking a verse out of context.  If we simply take the last part of  1 Corinthians 8, verse 1,  it says;  “Knowledge puffs up, but love BUILDS up!”  But, what was the context, in which that statement was made?

Well, here’s the context, from the first part of that verse..  “Now concerning food offered to idols:  (Paul is dealing with a specific subject here.  Although the principle he’s going to put forth, can be applied to a variety of subjects.)  Here’s what Paul says concerning the eating of food that has been sacrificed to so called “idols”.  “We know, that “all of us possess knowledge.”   In other words, we know what God has said about this subject.  Or at least, we SHOULD know what God has said.

And so Paul says..   “This “knowledge” puffs up, but love builds up.”   Be careful about thinking you know too much, is what he’s saying.  And so listen to what Paul says next..  “The one who thinks he knows something, does not yet know, as he ought to know.  (in other words, you’ve got the wrong attitude!)   “But if anyone loves God, he is known by God.”  (God knows whether or not you know the truth;  You’re known by God)

“Therefore, as to the eating of food offered to idols, we know that an idol has no real existence, and that there is no God but one.  For although there may be so-called gods, in heaven or on earth (as indeed there are many “gods” and many “lords”)  In other words, people CALL some things “gods”, and they CALL some persons “lords”.  “Yet for us, (for the ones who have true knowledge)  ..there is but ONE God, the Father, from whom ARE all things, and for whom we exist;  And ONE Lord, Jesus Christ, through whom ARE all things, and through whom we exist.”

“But not everyone has this knowledge.  Some people are still so accustomed to idols (they were in that day at least)  that they eat such food, as if it were sacrificed to an idol.  (Like it was sacrificed to a REAL idol!  To a REAL God!)  And since their conscience is weak, it is defiled.  But food doesn’t bring us any closer to God:  We’re no worse if we do not eat, and no better if we do.”

“But take heed, lest by any means, this “liberty” of yours become a stumblingblock, to them that are weak.”  The “liberty” that Paul refers to, is this freedom of choice, to be able eat any food we care to eat.  And to refuse any food we don’t care to eat.  And the reason that we have this freedom of choice, this “liberty”, is because of our knowledge of the truth of God’s word!

But don’t let your knowledge, and your “liberty” become harmful to someone else’s faith, if their faith happens to be weak, because of their lack of knowledge;  Because of their lack of “edification” on the subject.  And so do you see how this principle can be applied to any scriptural subject, and not just to the subject at hand, that of eating foods sacrificed to so called “idols”?

And so this is how knowledge, CAN lead to arrogance, is we don’t maintain the right attitude, and the right heart, in loving others.  And thus the saying;  “Knowledge puffs up, but love BUILDS up!”

Verse 5;  “It does not act unbecomingly, (love doesn’t) ..it does not seek the things of its own;  It is not easily provoked;  It keeps no account of wrongs.”  I like the NASB phrases that last part..  “It doesn’t take into account, a wrong suffered.”   In other words, yes, people do sometimes make mistakes, and you might end up getting mistreated.  (Sometimes, some people do it deliberately!)  But do you know what love does?  The love that builds up, instead on tearing down?  That kind of love doesn’t even take that into account.  It behaves itself like the wrong never even happened.  That could be a bit difficult sometimes, couldn’t it?  But yet, that’s what love would do.  And so, do we love, or don’t we love?

Verse 6;  “Love takes no pleasure in evil, but rejoices in the truth.”  That’s kind of to the point, isn’t it?  Love edifies, because truth edifies;  And love rejoices in truth.

Verse 7;  “Love bears all things, believes all things, hopes all things, endures all things.”  Now there’s the epitome of edification!  Bearing, believing, hoping and enduring!  Growing stronger and stronger, in obedience to the word of God.

Verse 8  kind of sums it up, with these words;  “Love never fails.”   And I suppose love never fails to edify, both the one loving, and the one being loved.   “..But if there are gifts of prophecy, they will be done away;  If there are tongues, they will cease;  If there is knowledge, (that refers to miraculous knowledge) it will be done away.”  All those miraculous gifts, they were all to be used for edification.  But they have all ended.  But love never fails;  Scriptural love, never ends, and never fails to “build up” everyone involved.

I think maybe we’ll stop right there.  There’s still more to be said about knowledge and edification, and about how obedience edifies, but that can wait till next time.